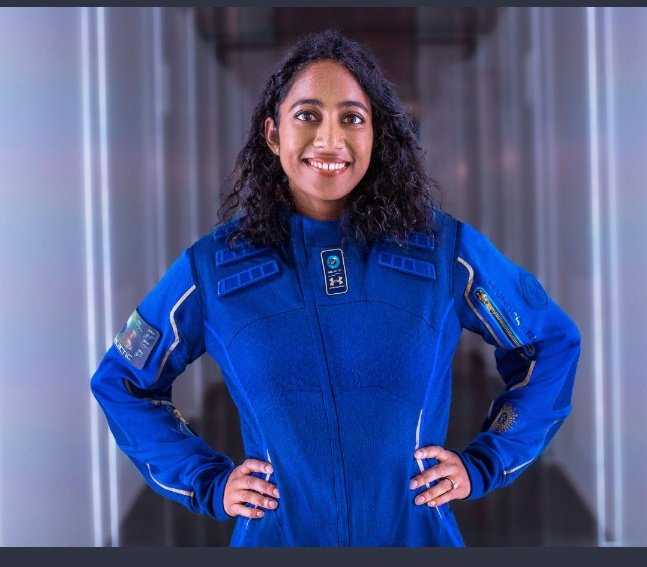 Bandla, who was born in Guntur district in Andhra Pradesh and brought up in Houston, was astronaut No 004 and her flight role was Researcher Experience. Photo courtesy: Virgin Galactic

Virgin Galactic's VSS Unity, as the spaceplane is called, took off for the 1.5-hour mission above New Mexico following a 90-minute delay due to bad weather.

Bandla joined Branson and five others on board Virgin Galactic’s SpaceShipTwo Unity to make a journey to the edge of space from New Mexico.

"I am so incredibly honoured to be a part of the amazing crew of #Unity22, and to be a part of a company whose mission is to make space available to all," 34-year-old Bandla tweeted days before the flight.

"When I first heard that I was getting this opportunity, it was just... I was speechless. I think that that probably captured it very well. This is an incredible opportunity to get people from different backgrounds, different geographies and different communities into space," she said in a video posted on the Twitter handle of Virgin Galactic on July 6.

The primary objective for Unity 22 was to serve as a test flight for future commercial passenger flights by Virgin Galactic.

Bandla, who was born in Guntur district in Andhra Pradesh and brought up in Houston, was astronaut No 004 and her flight role was Researcher Experience. The other crew members were two pilots and three other crewmates, including billionaire Branson, who turns 71 in a week.

She became the third Indian-origin woman to fly into space after Kalpana Chawla and Sunita Williams. Wing Commander Rakesh Sharma is the only Indian citizen to travel in space. The former Indian Air Force pilot flew aboard Soyuz T-11 on April 3, 1984, part of the Soviet Interkosmos programme.

Virgin Galactic - the business Branson started in 2004 - aims to fly private citizens to the edge of space. The trips are designed to permit passengers to experience three to four minutes of weightlessness and observe the curvature of Earth.