In a Singapore first, Night Safari has welcomed four Tasmanian devils, one of Australia’s most iconic predators. The four females – Crumpet, Snickers, Jesse and Panini – are all around three years old and have made the Wallaby Trail their new home. 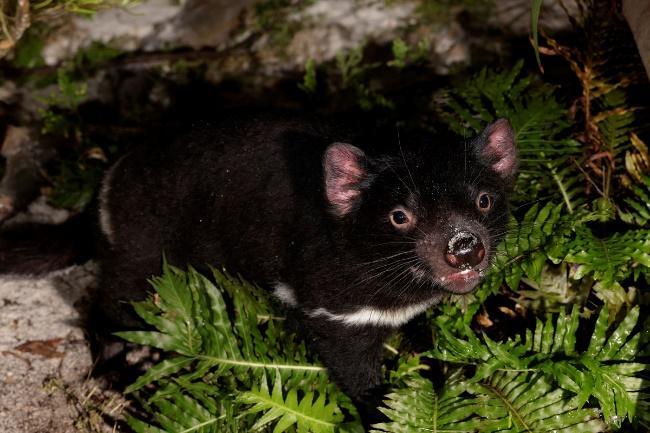 Tasmanian Devil Jesse in her private outdoor yard in Night Safari. Jesse is the only of the four specimens in Night Safari with a white stripe on the base of her tail. Photo credit: Mandai Wildlife Group

The Devils are part of the insurance population managed by the Save the Tasmanian Devil Programme (STDP), led by the Department of Natural Resources and Environment Tasmania. The transfer was made under the recommendation of the Species Management Programme (SMP). Under the SMP, Zoo and Aquarium Association Australasia (ZAA) member organisations collaborate to ensure the long-term viability and sustainability of species populations under human care. The STDP is an initiative of the Australian and Tasmanian State governments and an official response to the threat posed by Devil Facial Tumour Disease (DFTD).

Tasmanian devils are listed as endangered under the International Union for Conservation of Nature’s Red List. DFTD is a type of transmissible cancer highly contagious among Tasmanian devil populations. It spreads when the animals bite each other while fighting or mating, and results in large facial tumours, which can prevent them from eating, eventually causing starvation. Since the discovery of the disease in 1996, the wild population has declined by at least 80 per cent in diseased areas, now spread across the majority of the state.

Dr Luis Carlos Neves, Vice President, Animal Care, Mandai Wildlife Group, said, “The Tasmanian devils are an exciting addition to the Australasian species in Night Safari’s Wallaby Trail. It is a privilege to work with Save the Tasmanian Devil Programme and the Department of Natural Resources and Environment Tasmania and be able to join the international team that works to save the devils from extinction.”

Planning and discussions for Night Safari to receive the animals started as early as 2018, with the Tasmanian devils’ projected arrival in Singapore in 2020. Night Safari’s Animal Care team, including Assistant Curator Razak Jaffar, travelled to Tasmania in 2019 to undergo training with the animal care teams in the STDP and Trowunna Wildlife Sanctuary. Razak and team worked closely with the Australian partners to learn the biology of the Tasmanian Devils, how to safely manage and restrain them for medical procedures, and the right diet and ways to feed the carnivorous marsupials.

However, plans took a turn with the onset of the COVID-19 pandemic and travel restrictions. The teams had to pivot and work on preparations virtually. With the experts in devil husbandry unable to travel to Singapore to review the completed exhibit, the Night Safari team filmed a video tour of the new exhibit to share with the Australian partners to verify that the facilities suited the animals’ needs.

After four years of planning, Crumpet, Snickers, Jesse and Panini finally arrived safely in Singapore on October 7, 2022, accompanied by Trowunna Wildlife Sanctuary senior keeper Adrian Mifsud to ensure the animals’ well-being during the transit. The animals were brought to their indoor dens for a mandatory 30-day quarantine.

“Our global insurance population is an important response to the significant decline of the Tasmanian devil in the wild,” said David Schaap, Senior Wildlife Officer, Department of Natural Resources and Environment, Tasmania.

After the quarantine, health checks by the vets, and acclimatising to their new habitat, the devils were finally ready to meet the Singapore public. The launch of Night Safari’s new Tasmanian Devil exhibit was officiated by The Honourable William Hodgman, Australian High Commissioner to Singapore this evening.

Located at the end of Night Safari’s Wallaby Trail, their new home consists of two climate-controlled indoor exhibits, two expansive outdoor habitats for the animals to roam and explore, as well as back-of-house facilities consisting of indoor dens and outdoor yards, giving the nocturnal animals ample space to rest in the day. The four individuals will be housed in pairs – Crumpet with Snickers, and Jesse with Panini, with each pair having access to their respective indoor and outdoor spaces.

Tasmanian devils' unique vocalisations such as growls, screams and screeches when feeding or during confrontations with each other are likely the inspiration for their name.

“Crumpet is a confident individual with a more dominant personality. She spends hours exploring her surroundings in the outdoor yard and does not like being picked up by the keepers for health checks. Snickers, on the other hand, is much more reserved, preferring to hide in her nest box when Crumpet expresses her dominance. Snickers is also calmer with being handled. Jesse and Panini have formed a bond despite a rocky start. Their first introduction was full of open-jawed caterwauling and squabbles. The pair now thoroughly enjoy each other’s company, preferring to sleep together in the same nest box and appearing restless when they are not together,” said Razak Jaffar, Assistant Curator for marsupials, Mandai Wildlife Group.

Mandai Wildlife Group has been contributing to in situ conservation of these iconic Australian species by providing funding to the STDP through the Group’s conservation arm, Mandai Nature.

Here is the Tasmanian devils' debut in the Night Safari.