Wings of dragonflies and cicadas which resemble a bed of nails when seen through a microscope, have inspired scientists to invent an anti-bacterial nano-coating disinfectant capable of killing germs.

Scientists of A*STAR’s Institute of Bioengineering and Nanotechnology (IBN) of Singapore have been successful in making an anti-bacterial nano-coating that could be used to disinfect frequently touched surfaces such as door handles, tables and lift buttons. 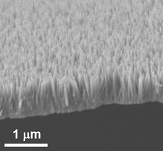 Zinc oxide nanopillars that looked like a bed of nails can kill a broad range of germs when used as a coating on frequently-touched surfaces. Photo courtesy: A*STAR

“Studies have shown that the wings of dragonflies and cicadas prevent bacterial growth due to their natural structure. The surfaces of their wings are covered in nanopillars making them look like a bed of nails. When bacteria come into contact with these surfaces, their cell membranes get ripped apart immediately and they are killed,” said A*STAR in a news release issued today.

Getting inspiration from the distinct property of these insects, a group of IBN scientists grew nanopillars of zinc oxide, a compound known for its anti-bacterial and non-toxic properties. The zinc oxide nanopillars can kill a broad range of germs like E. coli and S. aureus that are commonly transmitted from surface contact, according to A*STAR.

This technology will prove particularly useful in creating bacteria-free surfaces in places like hospitals and clinics, where sterilisation is important to help control the spread of infections. 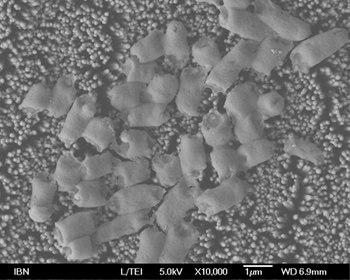 About 80 per cent of common infections are spread by hands. Current disinfectants may also contain chemicals like triclosan which may lead to bacterial resistance and environmental contamination if used extensively, it stated in the media release.

Jackie Ying, IBN executive director, said, “There is an urgent need for a better way to disinfect surfaces without causing bacterial resistance or harm to the environment. This will help us to prevent the transmission of infectious diseases from contact with surfaces.”

When the anti-bacterial nano-coating was tested on ceramic, glass, titanium and zinc surfaces, it was found that the coating effectively killed up to 99.9 per cent of germs found on the surfaces.

“As the bacteria are killed mechanically rather than chemically, the use of the nano coating would not contribute to environmental pollution. Also, the bacteria will not be able to develop resistance as they are completely destroyed when their cell walls are pierced by the nanopillars upon contact,” said A*STAR in the media release. 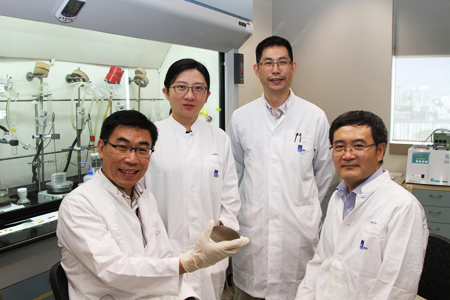 The researchers studied the effect of placing a piece of zinc that had been coated with zinc oxide nanopillars into water containing E. coli. All the bacteria were killed, suggesting that this material could potentially be used for water purification, it added.

Dr Yugen Zhang has led the research team behind the invention. He said that the researchers hope to use the technology to create bacteria-free surfaces in a “safe, inexpensive and effective manner”, especially in places where germs tend to accumulate.

National Research Foundation of Singapore has also given a grant to IBN to develop this coating technology, in collaboration with Tan Tock Seng Hospital, for commercial application over the next five years, according to the media release.