Singapore emerged as the top-ranked economy in Asia in the 2019 edition of the Global Innovation Index (GII), which also identifies India as a regional leader in innovation. Switzerland is the world's most innovative country followed by Sweden, the United States of America, the Netherlands and the United Kingdom, according to the report. 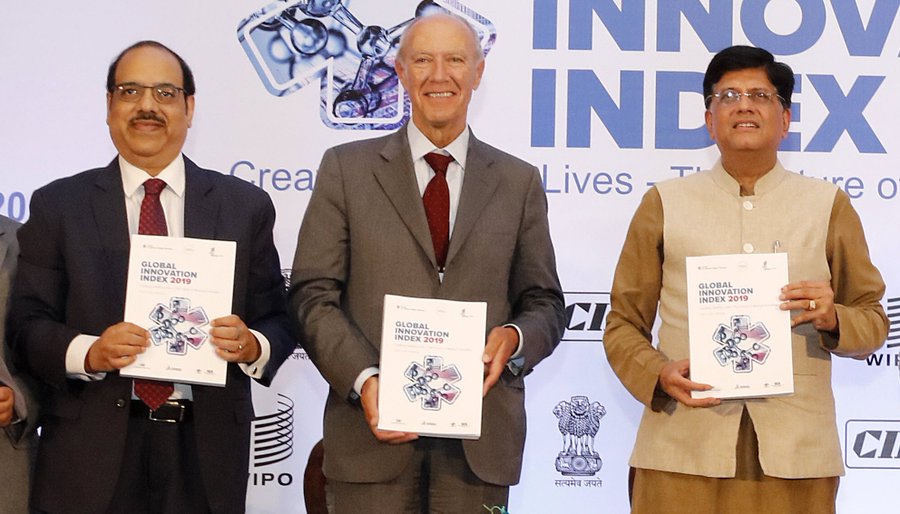 The report. launched in India for the first time, Despite signs of slowing economic growth, innovation continues to blossom, particularly in Asia. Photo courtesy: Twitter/@WIPO

The 12th edition of the GII ranks 129 economies based on 80 indicators, from traditional measurements like research and development investments and international patent and trademark applications to newer indicators including mobile-phone app creation and high-tech exports.

Jointly released by the World Intellectual Property Organisation (WIPO), Cornell University, INSEAD and with the Confederation of Indian Industry (CII) as one of its knowledge partners, the index released by the Government of India for the first time serves as a benchmark to gauge innovative activity across the world and how it is driving global economic and societal progress.

“While the Global Innovation Index ranks economies according to their innovation capacity and performance, it also provides valuable insights into the dynamics of global innovation: It highlights economies that excel in innovation and those that are more successful in translating investments in innovation inputs into innovation outputs,” said Soumitra Dutta, Former Dean and Professor of Management at Cornell University, a GII co-publisher.

The GII 2019 also looks at the economic context. Despite signs of slowing economic growth, innovation continues to blossom, particularly in Asia, but pressures are looming from trade disruptions and protectionism. Sound government planning for innovation is critical for success, the report showed.

"The GII shows us that countries that prioritise innovation in their policies have seen significant increases in their rankings," said WIPO Director General Francis Gurry. "The rise in the GII by economic powerhouses like China and India have transformed the geography of innovation and this reflects deliberate policy action to promote innovation," he added.