The drones will be deployed for use in pre-planned security events, search missions and situations requiring aerial surveillance.

The drone-equipped surveillance vehicles have been christened Sky Aerial Response Command (Sky ARC) and can carry up to three drones. The drones, which can fly to an altitude of a few hundred metres, will feed information and transmit images back to an integrated command and control system. 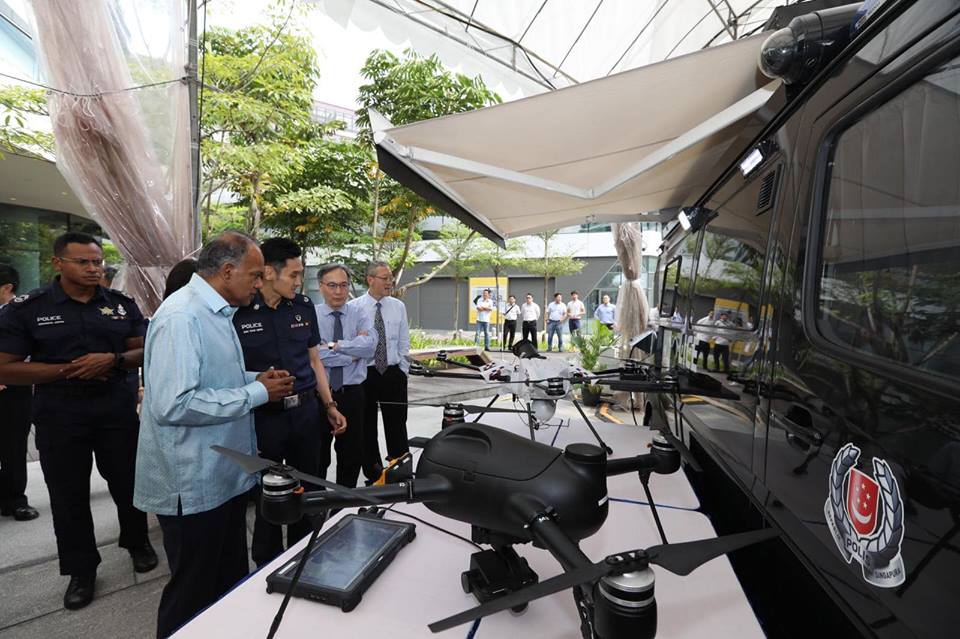 It can also be used in tracking suspects across a large area, such as a forest, as it is equipped with thermal imaging and can detect human presence.

The drone-equipped surveillance vehicle is one of the high-tech law enforcement measures Singapore Police is rolling out to enhance its operational effectiveness and become a “smart force”, said Singapore Police Force (SPF) in a briefing for this year’s Police Workplan Seminar.

K Shanmugam, Singapore’s Minister for Home Affairs and Law launched the Sky Aerial Response Command (ARC) during the Police Workplan Seminar today. He was the Guest of Honour during the programme.

The Minister observed that one key area the Singapore Police Force  will focus on will be defending the country’s social cohesion, particularly in the areas of racial and religious harmony.

He also stressed that the police must continue to protect the vulnerable in Singapore’s society.

Singapore Police are also going to equip its front-line police officers with the use of wearable technology such as smart glasses armed with video feeds for information gathering.

The glasses will be able to perform real-time video analytics such as facial recognition.

At this year’s Police Workplan Seminar, various initiatives that leverage technology to aid police officers in their frontline duties were showcased.

Read on to check out the new technologies that were unveiled this morning.
#SafeGuardingEveryDay in a different way.

This robot is interestingly programmed with customised messages on police information and safety tips for children and is a useful icebreaker between officers and kids.

Mi-ASTRO’s eyes light up in different colours and it can perform tricks such as somersaults and handstands which attract children.

The robot has already been trialled at three PCF pre-schools. SPF hopes to eventually equip the Mi-ASTRO with a translator to communicate with the elderly.

In addition to this, Enhanced Live Firing Range System was displayed which provides real-time feedback on marksmanship. Sensors will provide users with recommendations on weapon handling, breathing, posture and gaze.