Singapore, Hong Kong and India have all dropped places in a new ranking of democracies around the world. The Economist Intelligence Unit’s 2019 Democracy Index, which provides an annual comparative analysis of political systems across 165 countries and two territories, said the past year was the bleakest for democracies since the research firm began compiling the list in 2006. 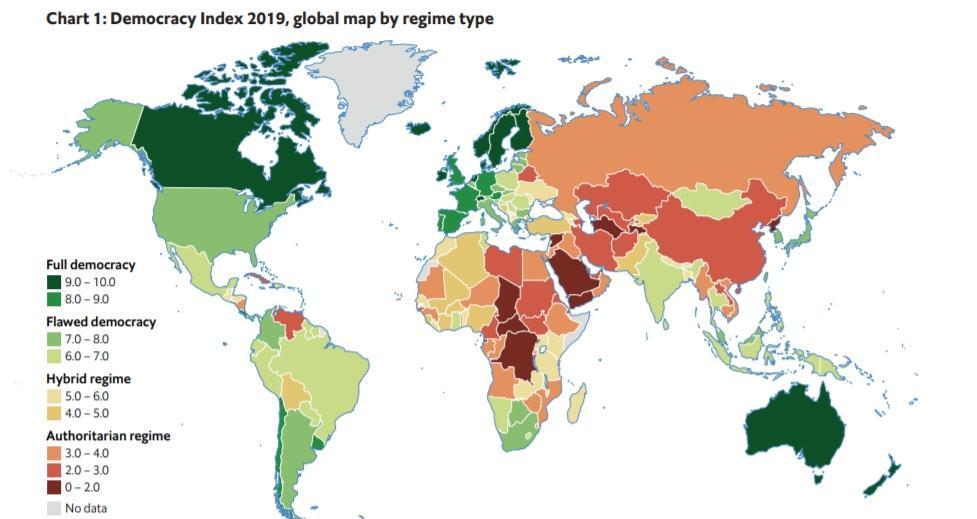 “The 2019 result is even worse than that recorded in 2010, in the wake of the global economic and financial crisis,” the research group said in the report, which was released on Wednesday. The average global score slipped to 5.44 out of a possible 10 - from 5.48 in 2018 - driven mainly by “sharp regressions” in Latin America, Sub-Saharan Africa, the Middle East and North Africa. Apart from coup-prone Thailand, which improved its score after holding an election last year, there were also notable declines in Asia, with increased protests and new measures restricting freedom across the region’s democracies.

India, the world’s largest democracy, dropped 10 places to 51 as a result of declining civil liberties, the group said. Prime Minister Narendra Modi’s government has been criticised by rights groups and western governments after shutting off the internet and mobile phone networks and detaining opposition politicians in Kashmir. Modi’s government also drew flak for its harsh response to ongoing protests against the religion-based citizenship amendment law. India’s score in 2019 was its worst ranking since the EIU’s records began in 2006, and has fallen gradually since Modi was elected in 2014.

Hong Kong, meanwhile, fell three places to rank 75th out of 167 countries as more than seven months of violent and disruptive protests rocked the Asian financial hub. An aggressive police response early in the unrest, when protests were mostly peaceful, led to a “marked decline in confidence in government - the main factor behind the decline in the territory’s score in our 2019 index,” the group said.

Singapore, which ranked alongside Hong Kong at 75th, saw its ranking dip due to the new “fake news” law which led to a deteriorating score on civil liberties.

“The government claims that the law was enacted simply to prevent the dissemination of false news, but it threatens freedom of expression in Singapore, as it can be used to curtail political debate and silence critics of the government,” EIU analysts said.

China’s score fell to just 2.26 in the EIU’s ranking, placing it near the bottom of the list at 153, as discrimination against minorities, repression and surveillance of the population intensified.