Singapore, get ready to sway to the romantic ballads of Engelbert Humperdinck 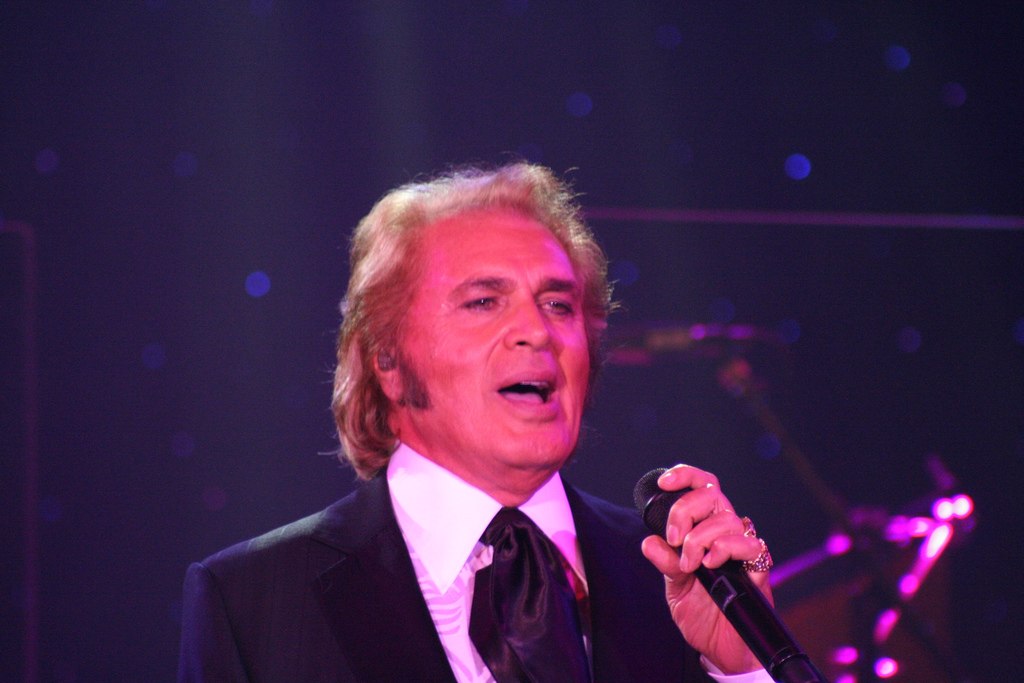 Engelbert Humperdinck will perform in Singapore on November 5 as part of his "The Angel on my Shoulder" tour. Photo courtesy: Wikimedia

Engelbert Humperdinck, whose real name is Arnold George Dorsey, is one of the finest ballad singers in the world. Born in 1936 in Madras, British India, Dorsey moved to Leceister, England when he was 10. His stage name Engelbert Humperdinck is borrowed from the 19th-century German composer of operas such as Hansel and Gretel. His string of big hits earned him the reputation of one of the greatest singers of love songs with hardcore female fans calling themselves "Humperdinckers".

For more than five decades, the renowned romantic singer has found fans of every age and across the globe. He has one of the largest fan clubs, has sold more than 140 million records, including 64 gold albums and 23 platinum, four Grammy nominations, a Golden Globe, and stars on the Hollywood Walk of Fame and Las Vegas Walk of Fame.

On November 5, the 83-year-old Humperdinck is set to perform in Singapore at the University Cultural Hall at the National University of Singapore, bringing his tour ‘The Angel On My Shoulder’ to the island nation.

As we countdown to the epic performance, here’s a look at some of the greatest hits of Engelbert Humperdinck:

Released in early 1967, Humperdinck's version of "Release Me" made the top ten on both sides of the Atlantic and number one in Britain. In fact, the song prevented The Beatles' "Strawberry Fields Forever"/"Penny Lane" from gaining the top slot in the United Kingdom. The song reportedly sold 85,000 copies a day at the height of its popularity.

2. A Man Without Love

Following from his major successes in 1967, Humperdinck reached number 2 on the UK Singles Chart once again in 1968 with "A Man Without Love". The album of the same name climbed to number 3.

3. Am I That Easy to Forget

This was a song originally written by country music singer Carl Belew and W.S. Stevenson and published in 1958. Several versions of the song have been recorded by artists such as Skeeter Davis, Jim Reeves and Debbie Reynolds but the version that did the best on the US pop charts was the one recorded by Humperdinck. Released as a single in late 1967 from his album The Last Waltz, it reached number 18 on the Hot 100 and number one on the Easy Listening chart in early 1968. His version was also a big hit in England, where it spent two weeks at number three on the UK Singles Chart.

The earliest vocal version of this song was recorded by Freddy Quinn in 1965. However, it was pulled from the market almost immediately after its release due to an ownership dispute. Versions of the song have been sung by Humperdinck along with many other famous artists such as Bing Crosby, Elvis Presley, and Wayne Newton. In 2013, vocal group Il Divo recorded the song as a duet with Humperdinck.

This was one of Humperdinck's biggest hits, spending five weeks at number 1 on the UK Singles Chart, from September 1967 to October 1967. It has since sold over 1.17 million copies in the United Kingdom. The song also spent nine non-consecutive weeks at number one in Australia. In the United States, it reached number 25 on the Billboard Hot 100 chart and made the top ten of the easy listening chart.

The song was used as the theme song of the 1968 musical short film of the same name. It has both French and English versions sung by Mireille Mathieu and Humperdinck respectively - both versions were big hits. The English version premiered as a single in 1968, and was then included on Humperdinck's 1969 album Engelbert.

An Italian pop song from 1962, sung in the bossa nova style, Quando, Quando, Quando (which translates to When, When, When) was originally recorded in two different versions by Tony Renis and Emilio Pericoli. The song is one of the best-selling singles of all time, with more than 50 million sold. Humperdinck recorded his version of the song in 1968.

This ballad was released in 1976 and was a top 10 hit in the US. It was also nominated for a Grammy Award, went Gold, and won the "most played jukebox record of the year" award. The album of the same name reached the top 20 on the US charts, and was a Double Platinum hit for the singer

The song, which is an English adaptation of an Italian song called “Melodia”, was released on the album Engelbert and as a single in 1969. The song was a top ten hit in multiple countries, and spent 14 weeks on the UK Singles Chart, peaking at number 3, reaching number 1 in Flanders and Singapore, number 3 in Malaysia, number 5 in Yugoslavia, and number 6 on the Irish Singles Chart. In the United States, the song spent 11 weeks on the Billboard Hot 100 chart, peaking at number 42 and reaching number 4 on Billboard's Easy Listening chart.

Engelbert Humperdinck will perform in Singapore on November 5 at the University Cultural Centre Hall, National University of Singapore. Get your tickets here.