Expatriate salary and benefits packages in Singapore rose by a modest 4% in 2021 in local currency terms despite the city’s fall to 22nd place in the rankings of the costliest places to employ expatriates globally.

This was one of the findings of the latest MyExpatriate Market Pay Survey published annually by ECA International, the world's leading provider of knowledge, information, and software for the management and assignment of employees around the world. 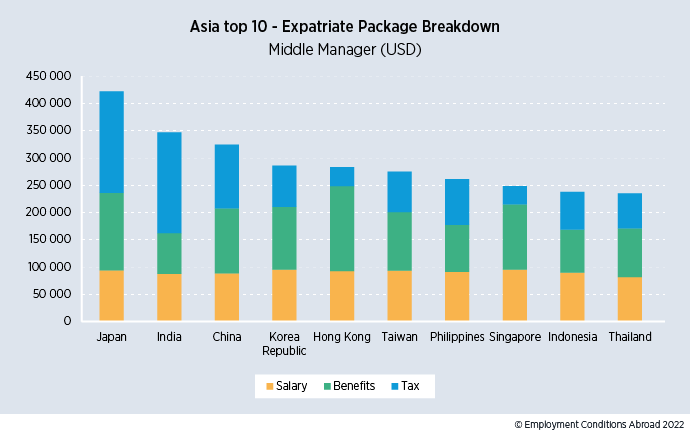 When considering the cost of an expatriate package, companies need to factor in three main elements: the cash salary, benefits – such as accommodation, international schools, or cars – and tax. To assist companies relocating staff with benchmarking their packages against the market, ECA conducts its annual MyExpatriate Market Pay Survey of pay levels for expatriates around the world, including benefits, allowances, salary calculation methods, and tax treatment.

“Although rates of pay growth were relatively modest in local currency terms, once package values were converted into USD, their total value rose by a total of 10%, which represented a significant recovery from the year before,” said Lee Quane, Regional Director – Asia at ECA International. “Salaries recovered after falling by an average of USD 1,000 per annum in 2020, while benefits costs, such as those around accommodation expenses, also rose as many employers provided financial assistance to their expatriate staff in meeting rising accommodation costs as the rental market bounced back in 2021.”

“Overall, the cost of employing an expatriate in Singapore rose by approximately 10% to just under USD 250,000 per annum, with cash salaries seeing increases of about 9.5% in USD terms,” Quane added.

Elsewhere, Australia and New Zealand both saw significant rises of eight and 16 positions in the global rankings to 7th and 13th place respectively, owing to a variety of reasons including the strengthening of their currencies, increased benefits costs, and income tax changes in the past 12 months.

China remains the location with the third-highest expatriate packages in the region after Japan and India.

“While its position in the rankings remains unchanged, cash salaries paid to expatriate staff increased by over 11% in 2021 in USD terms compared to the year before,” said Quane. “This was partly influenced by the relative strength of the Chinese Yuan, but may also be attributed to companies having to offer higher salaries in order to attract and retain expatriate staff, as China continued to impose its zero-Covid policy throughout the year.”

“Salary and benefits packages for expatriate staff in Hong Kong recovered slightly in 2021 following a fall at the start of the Covid-19 pandemic. Cash compensation packages rose by 4.5% in USD terms, but this was lower than rates of growth seen in other regional economies such as Japan and Singapore.

Furthermore, the costs of benefits continued to decrease, as they did in 2020, contributing to a fall of three places for Hong Kong to 8th in our rankings,” Quane added.

Many countries also joined Singapore and Hong Kong in falling down the rankings. These included Japan, Taiwan, Thailand, and Vietnam.

Quane explained, “While all locations in the region saw an increase in the pay packages for expatriate staff, many still fell in our rankings as their rates of growth were lower than those experienced elsewhere in the world. Japan, for example, saw the value of expatriate packages increase by 4% in 2021. Nevertheless, it is no longer the location with the highest expatriate packages worldwide, having been overtaken by the UK, where the overall value of an expatriate package rose by over 9% in USD terms.”