In the midst of a competition for the title of Asia’s best-performing stock market this year, eight have climbed to records among the major equity indexes in the region in the first four months itself. 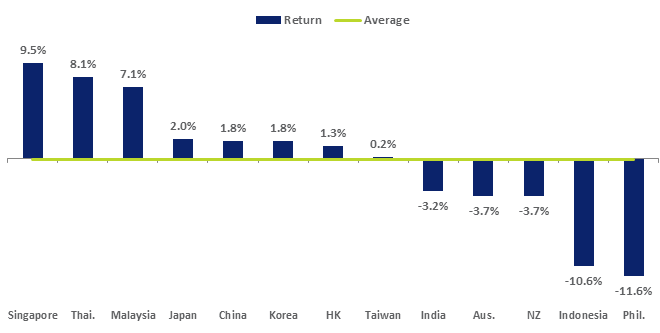 Over the first four months of 2018, the Straits Times Index (STI) outperformed Asia’s benchmarks. FTSE Russell recently reported that the alternate FTSE Singapore Index generated a 9.5% USD total return over the period, compared to a 0.1% average decline for the 13 Asian benchmarks, according to Singapore Exchange’s (SGX’s) market update report.

Half of the STI stocks that are scheduled to report earnings this reporting season have now released their results, with average net profit after tax growing 9% YoY. The next STI stocks to report are StarHub tonight, then OCBC on Monday morning, said the report.

For regional and global comparisons, FTSE Russell maintains and publishes monthly a set of country indices using standardised criteria, useful for cross-country comparisons. Within this Index series, the alternate FTSE Singapore Index has maintained the strongest return among the Asia Pacific Indices over the first four months of 2018. The FTSE Singapore Index (with 32 constituents) generated a USD total return of 9.5%. This compared to an average decline of 0.1% for all the 13 Asian Pacific Indices that span 1000 stocks.