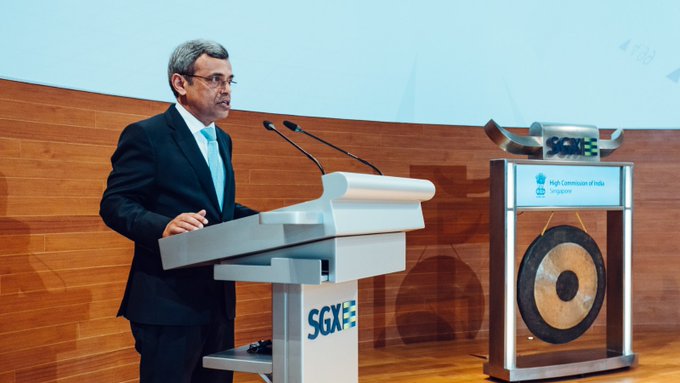 "It will give a boost to GIFT and SGX's role in the Indian financial market, as India is rapidly moving towards a USD 5-trillion economy," the High Commissioner said at the Daily Securities Market Opening ceremony on Monday as part of the SGX 20th anniversary celebrations.

The proposed special purpose vehicle will allow the NSE's India-related products offered on the SGX, including Nifty futures, to be executed in the GIFT City. Regulatory bodies Securities and Exchange Board of India (SEBI) and the Monetary Authority of Singapore (MAS) granted permission for the move recently.

Ashraf added that the SGX has had close links with India, with nearly 85 per cent of India's external commercial bonds and a majority of Masala bonds being listed on the exchange, which has also been trading in Nifty and rupee derivatives.

"The slew of measures initiated by our government to ease conditions for external commercial borrowings and foreign portfolio investment will be of great benefit to Indian investors and offers foreign investors expanded opportunities in a stable and rapidly growing economy," the envoy said.

Meanwhile, the Singapore Exchange (SGX) has also underlined the importance of the Indian market with huge financing needs in the infrastructure and green projects.

"India is an important market for the SGX, given the wide range of capital market and investment opportunities for investors and issuers. We currently have close to 200 debt securities by more than 100 Indian issuers listed on the SGX, with issued amounts of about USD 80 billion," SGX president M Ramaswami said during the event.