The latest Tory leadership debate between Rishi Sunak and Liz Truss was abandoned after the presenter reporter fainted on stage, half an hour into proceedings. 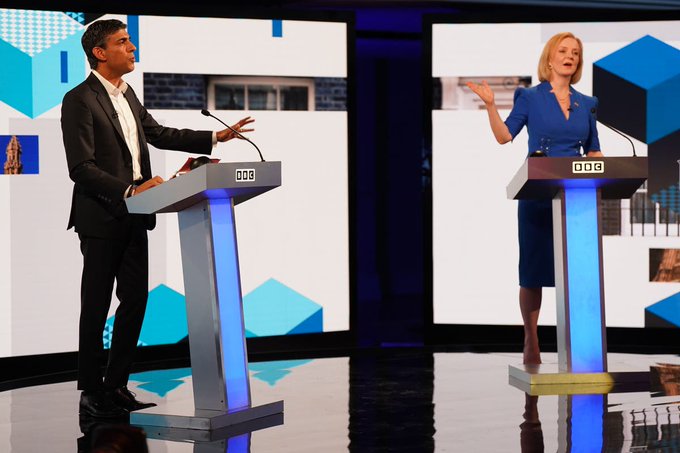 In their first head-to-head TV debate organised by the BBC, the two contenders to be the next PM did not hold back from "blue-on-blue" attacks. Photo courtesy: Twitter/@PoliDigitalUK

The Sun and TalkTV debate, hosted by journalist Kate McCann, abruptly halted after a loud crash was heard. TalkTV said McCann was "fine" but the channel had been given medical advice not to continue.

"We apologise to our viewers and listeners," the channel added.

The leadership candidates tweeted that they were relieved to hear McCann was fine, and indicated they would be happy to stage a rematch.

The TalkTV presenter had been due to co-host the debate alongside the Sun's political editor Harry Cole, but he pulled out after testing positive for COVID.

Before it was halted, the latest televised debate between the two candidates had been covering tax, the state of the NHS and rising living costs.

They had been about to begin a section on the UK's support for Ukraine when the debate went off air.

In their first head-to-head TV debate organised by the BBC, the two contenders to be the next PM did not hold back from "blue-on-blue" attacks.

Sunak told Truss her tax cut plan would "tip millions of people into misery" and cost the Conservatives the next election. Truss said tax rises brought in by him would lead to a recession.

The foreign secretary and former chancellor, who until three weeks ago were in the same cabinet, talked over each other at times and shot angry glances across the stage at Stoke-on-Trent's Victoria Hall.

It led to complaints afterwards by Truss's supporters that the ex-chancellor was being too aggressive and was "mansplaining" - something fiercely denied by the Sunak camp.