Sarees are not just for mothers-in-law: Laila Tyabji 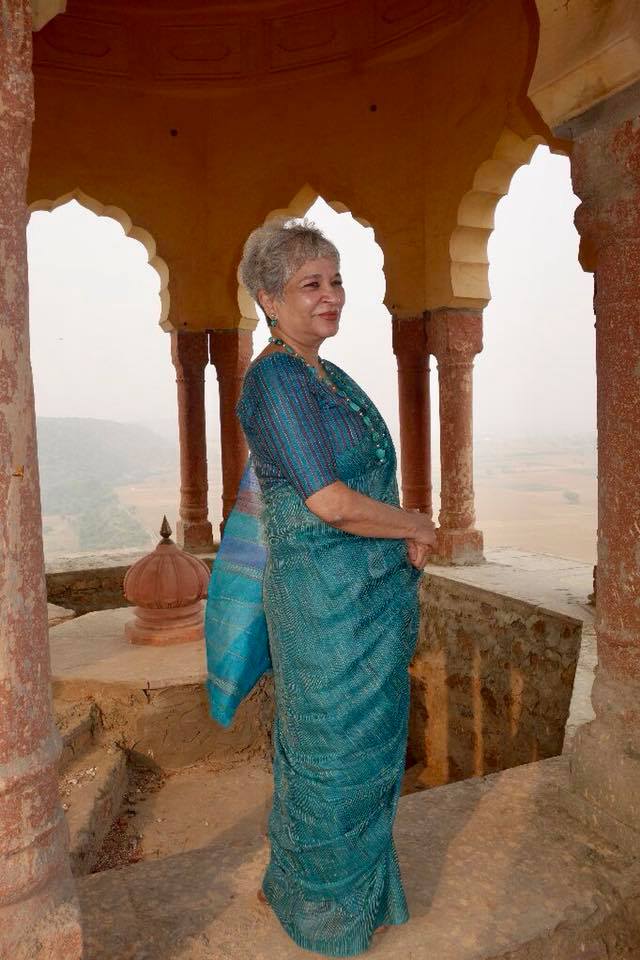 Meet the woman who made sarees cool again.

“One day in 2016 I decided to just start documenting the sarees I wore every day for a week. Then one week turned into a month, and suddenly a whole year is over,” laughed Laila Tyabji, the founder of Dastkar.

Laila was in Singapore for her saree exhibition and embroidery workshop, organised by Kala Tarang, a Singapore-based enterprise set up by Sangeeta Roy to promote Indian Handicrafts in the sunny island state.

“I started my Saree Diary I felt that everyone knows about the grand sarees – the Banarasi, the Kanjivaram and so on – but no one knew about the cotton sarees worn everyday. I wanted to showcase that,” she explained.

Her collection had garnered an extraordinary number of responses – thousands of people now follow the Saree Diary and are actively asking questions about her sarees.

“About 20 years ago, sarees were not a popular choice of clothing in urban India. People thought that wearing sarees were boring, and there was this perception that only mothers-in-law wear sarees.” To her delight and amazement, young people have come up to her and said, “Madam, I have never worn a saree in my life, and you have inspired me to buy one.”

It was also with the proliferation of the Internet and social media that this renewed buzz around sarees were generated. “There are now saree groups and clubs all over social media platforms, and I personally know about 35 or 40 of them. Each group had thousands of members who post pictures of themselves wearing sarees, do writeups on different styles to share with each other.” 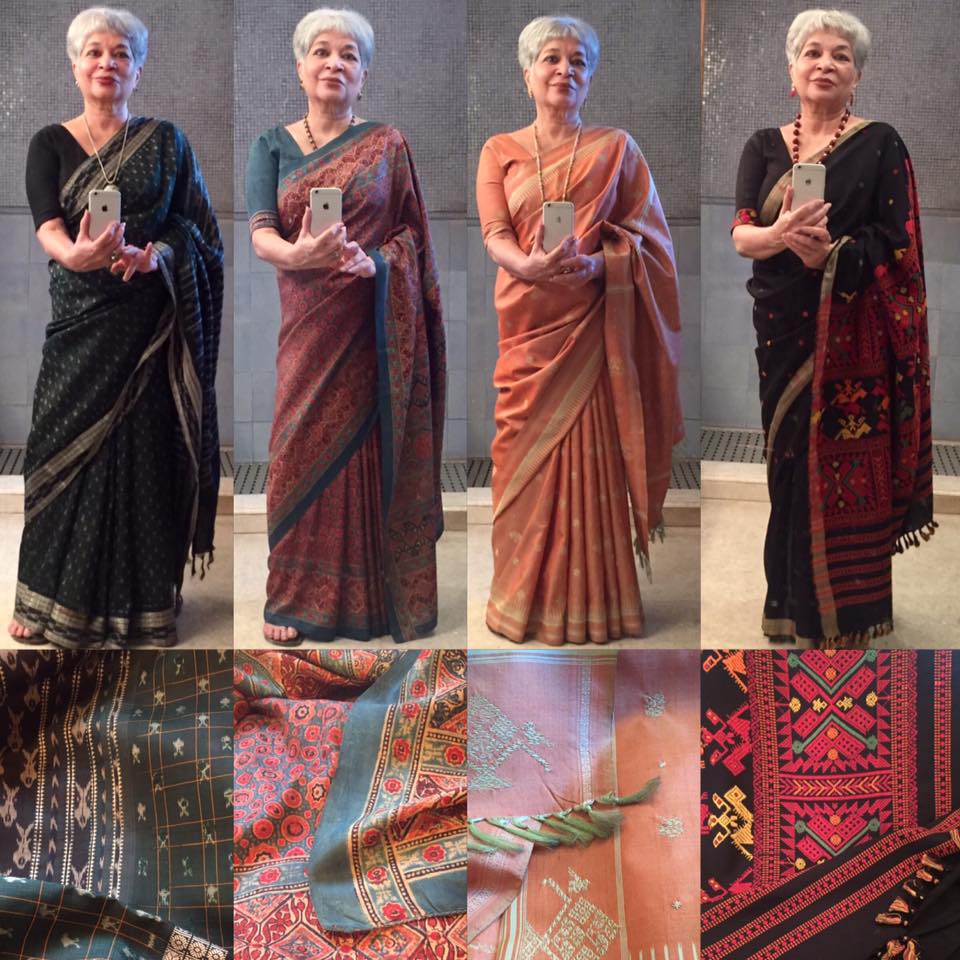 Laila explained that this has helped to increase and facilitate knowledge exchange on this beloved art of sarees. “Digital tools have also made sarees accessible now that craftsmen are able to interact directly with their customers.”

The convergence of traditional skills and modern technology

Laila lamented that one of the sad paradoxical things about Indian craft abroad is that though you could buy Indian crafts and textiles in a foreign country, for instance Singapore, they were not the best that India could offer.

“I felt that it is important to project, at this time of India’s development, the beautiful art form that craft is, and its ability to create the most extraordinary things. We have skills in India that no other country in the world has, and I think we need to showcase that,” said Laila.

She had founded Dastkar back in 1981 for this mission – promote the revival of traditional crafts in India. “The main objective of Dastkar was to link the people in rural India who have these extraordinary skills with the urban consumer who is the new market. Ultimately, we want to help people use those skills to earn a living, be empowered, have employment and not have to rely on charity schemes from the government.” 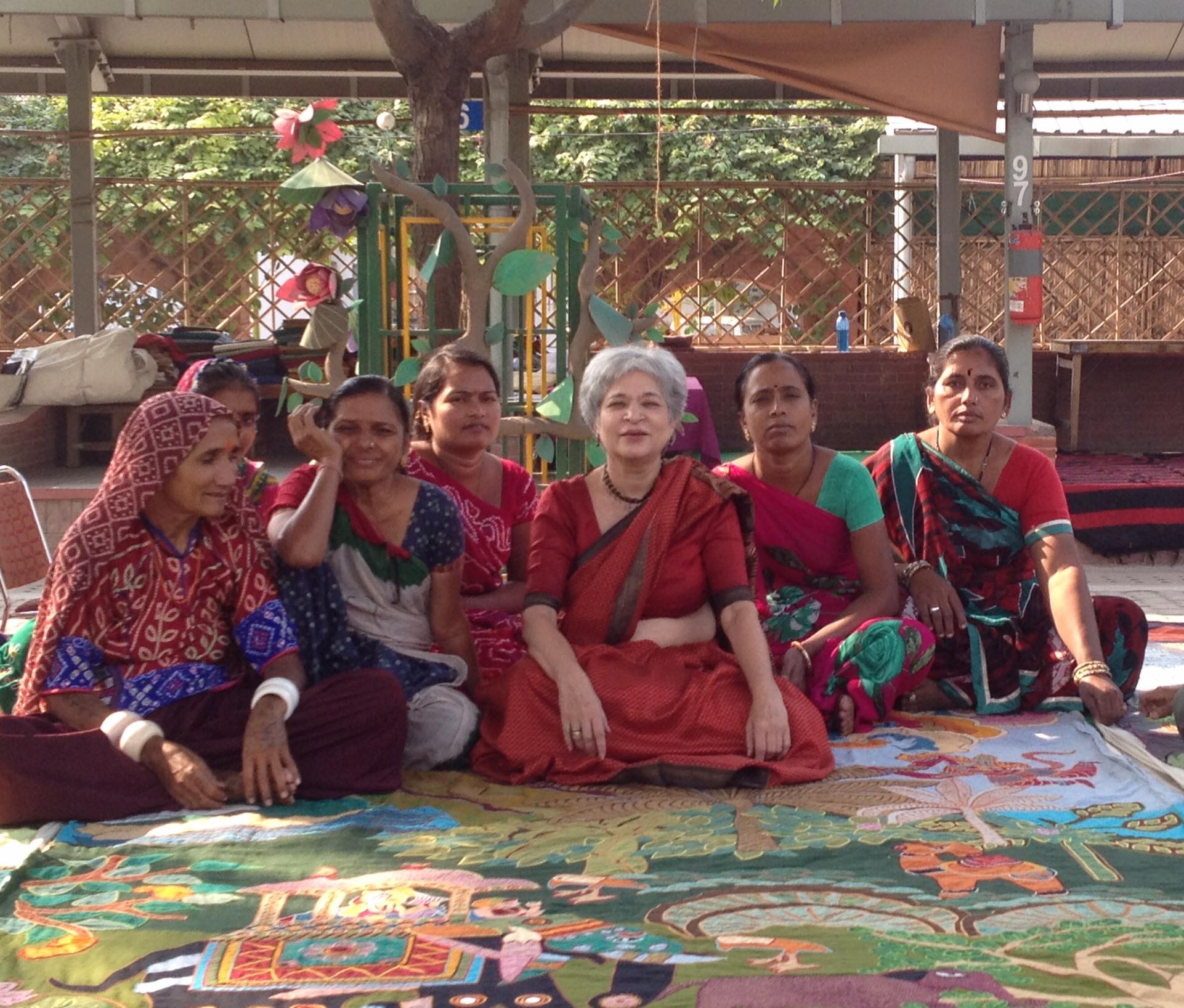 When the Delhi-based non-governmental organisation first started, they only had a handful of craftspeople onboard. “But now, we are working with families from over 900 locations in India, and I would say all of them are doing wonderfully well,” Laila said.

E-commerce and digitisation has surely helped the craftsmen to reach a wider audience as well. She shared about how, during one of the recent meetings, an elderly craftsperson had waved his smartphone and said, “This phone has done more for me than 70 years of Indian government schemes.”

“It was a wonderful combination of traditional skills and contemporary technology that have come together to create a wonderful synergy,” she enthused.

From the end result to the process

With regards to her inspiration for the hand-on embroidery workshop held across three days at The Colonial at Scotts, Laila explained, “Sangeeta and I came up with this idea, because we have realised that there is a lot of interest in Indian crafts here, but it’s always in the end result – and we felt that it was important for people to know what actually goes on in these crafts.”

The workshops focused on two of the major Indian embroideries – Chikankari from North Indian region, and Lambani from South India. “They were a nice contrast to each other because the Chikankari was all about the delicate floral patterns, whereas the Lambani had very robust and bold colours.” 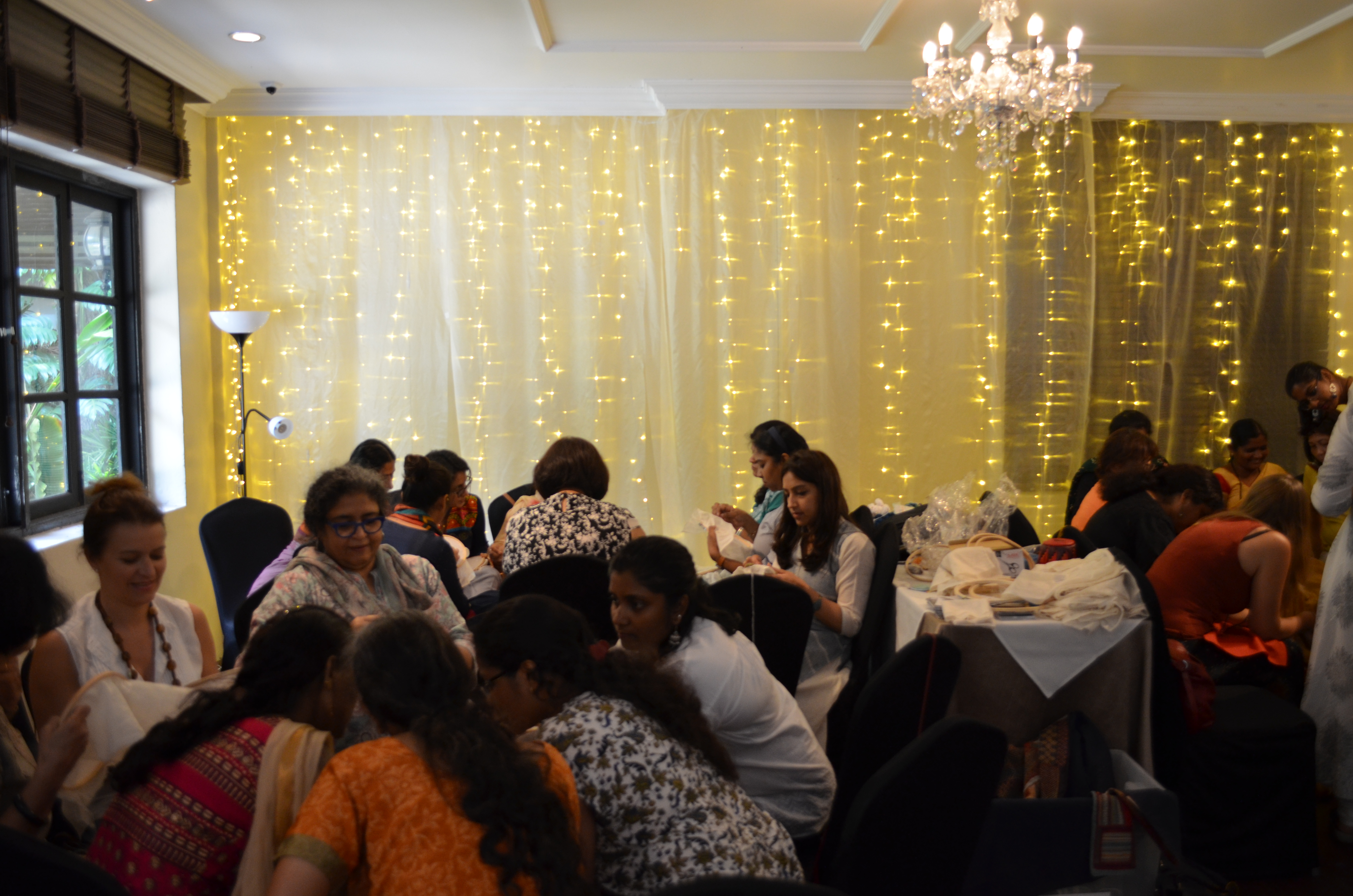 Hands-on embroidery workshop at The Colonial at Scotts. Photo: Connected to India

Laila added that the workshops were received with overwhelming responses – all three days were running on full capacity. “The Indian diaspora crowd here have a nostalgia for Indian culture and craft, and they really appreciated it.”

Founder of Kala Tarang, Sangeeta, explained that when she first started organizing exhibitions and events for Indian crafts, “The knowledge surrounding these crafts were a bit low so I had to explain a lot about the history and how Indian crafts work. But over the years, the explanation need has gone down, and I think that really shows that we are making an impact on the community.” 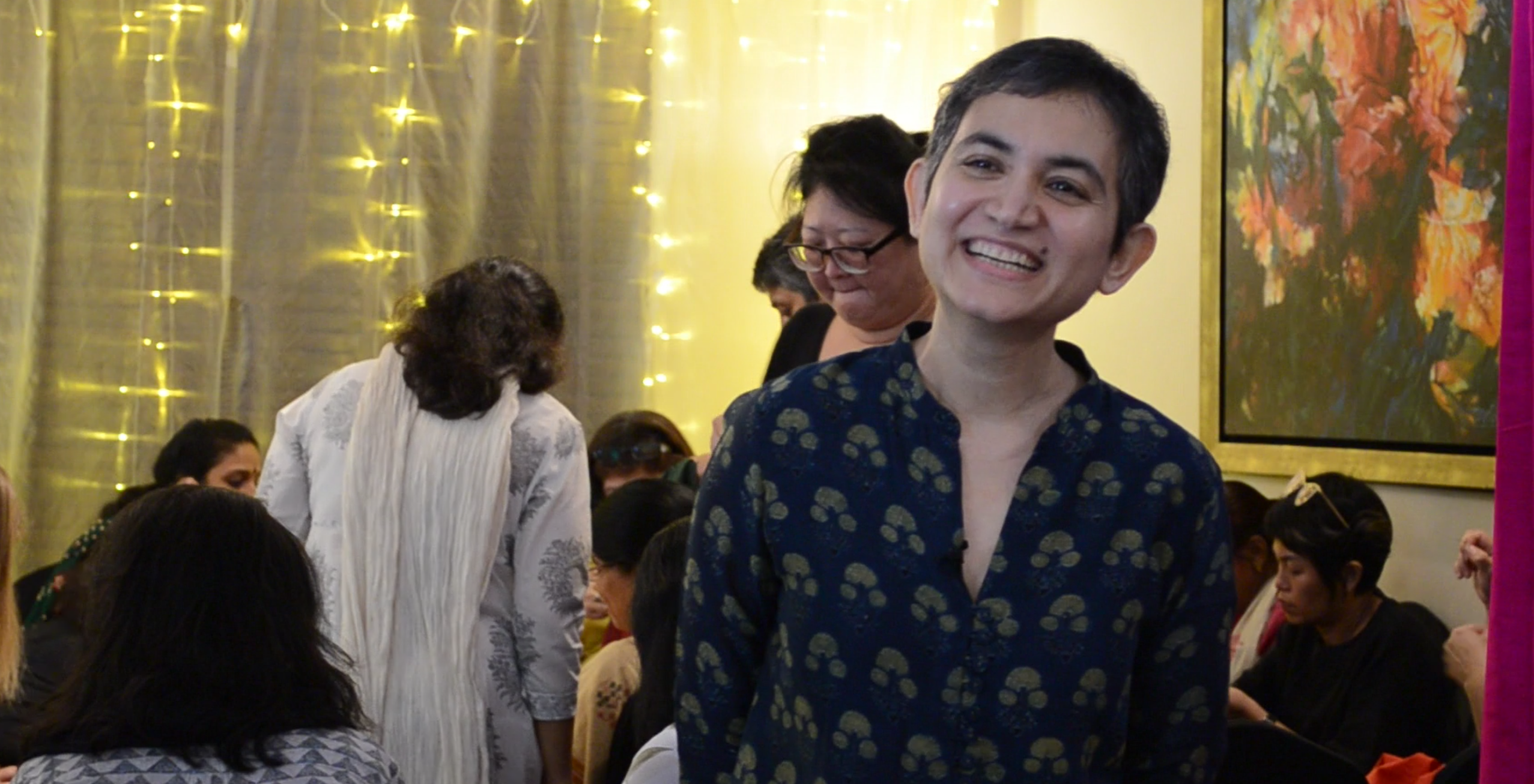 She also tries to bring in various kinds of crafts to expose the audience to a wider range of Indian handicrafts. “I think we have a very rich culture, with so many different styles and aesthetics – and that is what I want to try to show the rest of the world, that there is a whole exciting world out there.”

Moving forward, Sangeeta intends to take Kala Tarang beyond Singapore. “Of course, I am constantly planning and working on it, and I hope it happens soon.”