India’s 2011 ICC World Cup victory can never be forgotten and the images of player celebrations have been etched into fans’ memories. One of the most enduring moments following the win was of Master Blaster Sachin Tendulkar being lifted on to the shoulders of his teammates and being carried around the stadium, celebrating his first ever World Cup win a long and illustrious career. 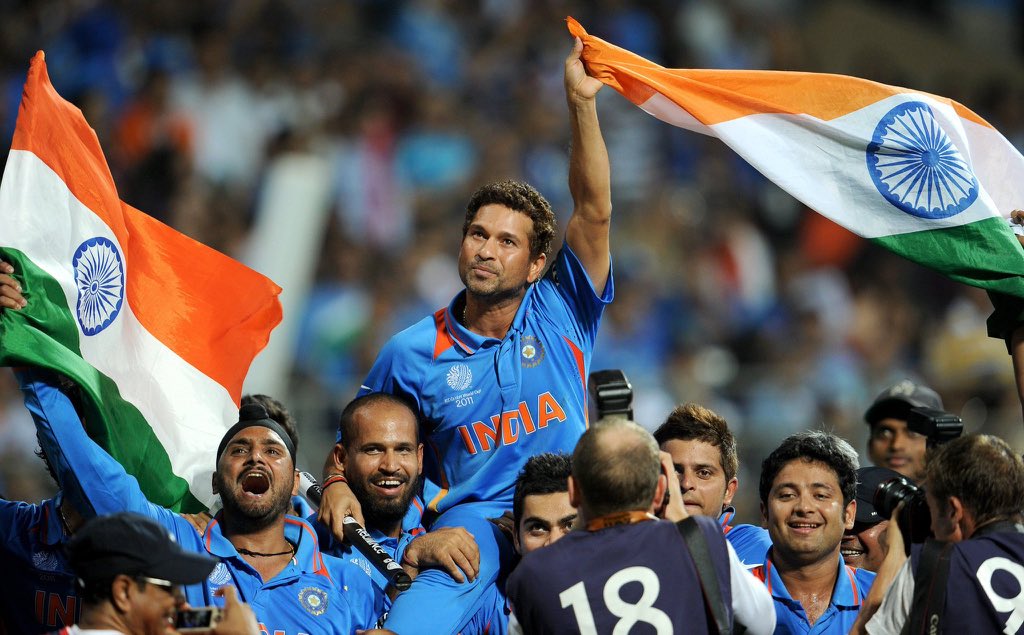 Sachin Tendulkar being carried on the shoulders of his teammates after winning his first ever ICC World Cup. Photo courtesy: Twitter/@ImRaina

The image in fact was so memorable that it was recently voted the Laureus best sporting moment in the last 20 years, winning the maximum number of fan votes.

Thank you all for the overwhelming love and support!

I dedicate this @LaureusSport award to India 🇮🇳, all my teammates, fans and well wishers in India and across the world who have always supported Indian cricket.#SportUnitesUs #Laureus20 #SportForGood pic.twitter.com/wiqx0D9e2E

Tendulkar was presented the award by former Australian skipper Steve Waugh after tennis legend Boris Becker announced the winner at a glittering ceremony.

"It's incredible. The feeling of winning the World Cup was beyond what words can express. How many times you get an event happening where there are no mixed opinions. Very rarely the entire country celebrates," Tendulkar said after receiving the trophy. "And this is a reminder of how powerful a sport is and what magic it does to our lives. Even now when I watch that it has stayed with me."

"This is a reminder of how powerful sport is and what magic it does to all of our lives."

A God for a nation. An inspiration worldwide.

And an incredible speech from the Laureus Sporting Moment 2000 - 2020 winner, the great @sachin_rt 🇮🇳#Laureus20 #SportUnitesUs pic.twitter.com/dLrLA1GYQS

"It was the proudest moment of my life, holding that trophy which I chased for 22 years but I never lost hope. I was merely lifting that trophy on behalf of my countrymen," he added.

A powerful, strong and moving tribute to a room full of sporting legends from @sachin_rt in honour of Nelson Mandela and the incredible power of sport to unite and inspire 👏#Laureus20 #SportUnitesUs pic.twitter.com/0z3mNatUFh

The 46-year-old Tendulkar, the highest run-getter in cricket, also said that holding the Laureus trophy was a great honour.

The cricket legend also shared his memories of meeting South African leader Nelson Mandela at the age of 19 and spoke about the impact Mandela had on him.

"His hardship did not affect his leadership. Out of many messages he left, the most important I felt was that sport has got the power to unite everyone,” said Tendulkar.

Absolutely agree with the great @sachin_rt paaji. 🙏
Sport has the power to unite us and congratulations on winning the #LaureusSportingMoment 2000- 2020 award. 👏👏 #Laureus20 https://t.co/lbNWUzatxQ

Congratulations Sachin paaji on being honoured with the prestigious Laureus Sporting Moment Award. A great achievement and a proud moment for our nation. 🇮🇳 @BCCI @sachin_rt https://t.co/cWOfAuBB6i

Congratulations Paji @sachin_rt. You never fail to make the nation proud.
That moment from WC11 still gives us goosebumps, such an emotional & overwhelming memory for all of us.
So wonderful to see more & more feathers added to your cap! pic.twitter.com/dgYSbHPRSN