The Singapore Police Force (SPF) revealed today that about 8,000 frontline police officers will eventually carry a specialised smartphone with custom-built apps that will help with their work and that robots would be used in various capacities as well. 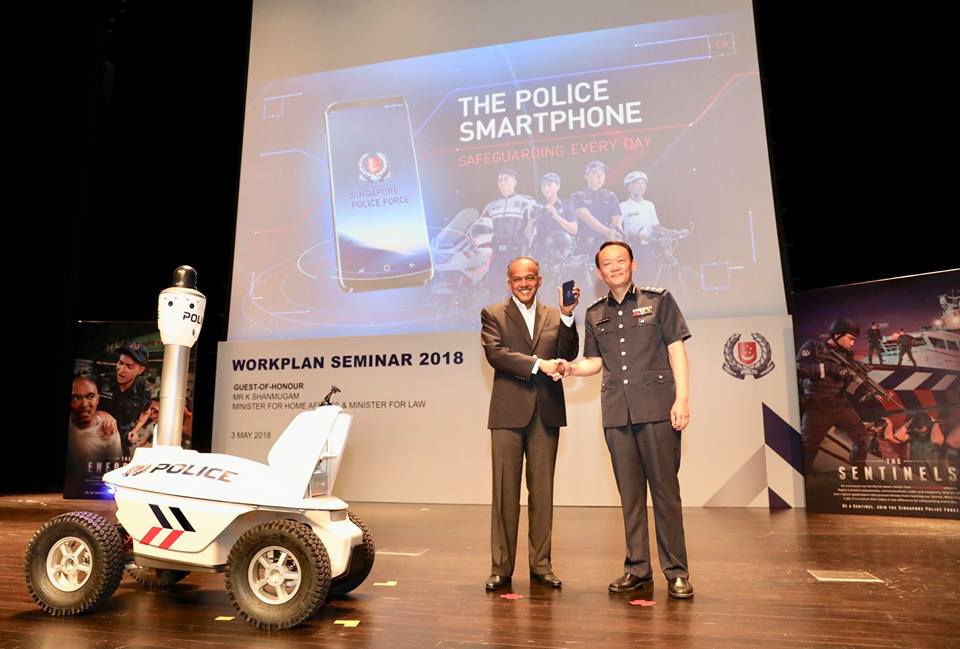 The personal-issued device, which was showcased at the Police Workplan Seminar this year, will allow officers across the operations, investigation and intelligence units to respond faster and more effectively to incidents even when they are off-duty, the police said in a media release.

The smartphone’s apps include secured messaging, access to the SPF knowledge management database which contains standard operation procedures and policies, an app that officers can use to plot the locations and details of private CCTV cameras, an investigation diary linked to the police’s case management system, as well as a Match-It app that allows officers to identify a student's school based on his or her uniform.

These apps will be hosted on a secured platform and available to officers “in the near future”, SPF said in the release, without specifying a timeframe. SPF also said that it envisaged the smartphone going beyond incident management and including apps to aid in decision-making across all frontline functions, fulfil administrative and training functions as well as help in engaging the public.

At the seminar, the police also showcased several other technologies that they are testing.

The police also said that robotics is an area they have been exploring to reduce and automate tasks that do not require human intervention, or to mitigate risks to officers.

“This allows our frontline officers to improve their efficiency, productivity and capabilities and focus on higher-value work,” they said.

For example, SPF trialled an autonomous patrol robot, the S4 Pan-Tilt-Zoom Patrol Robot, at Chingay 2018. The robot is able to patrol autonomously without human intervention and provide live video feeds to a command post, the police said.

Another example is the Multi-purpose All Terrain Autonomous Robot (MATAR) 2.0, which was trialled in-house at the Home Team Academy in September last year.

The robot, a collaboration between SPF and the Home Affairs Ministry’s Office of the Chief Science and Technology Officer and A*STAR’s Institute for Infocomm Research, has features including fingerprint authentication, 360-degree live video capture and real-time facial recognition. It can also navigate autonomously indoors and outdoors, and avoid obstacles.