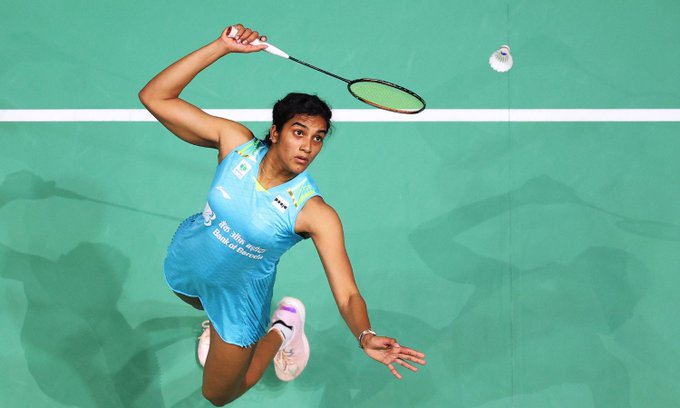 The 27-year-old will be leading the Indian charge at the Commonwealth Games, starting July 28 in Birmingham. Photo courtesy: Twitter/@Gen_VKSingh

“I congratulate PV Sindhu on winning her first ever Singapore Open title. She has yet again demonstrated her exceptional sporting talent and achieved success. It is a proud moment for the country and will also give inspiration to upcoming players,” PM Modi wrote on his official Twitter profile.

Sindhu won the summit clash by 21-9, 11-21, 21-15. She was off to a great start, winning the first game by a thumping margin. Zhiyi made a comeback in a similar fashion in the next game, winning it by 11-21. In the decider game, the top Indian shuttler maintained her composure to win it 21-15 and win the title.

"I congratulate PV Sindhu on behalf of the country. She has uplifted pride and honour of the tricolour by clinching the Singapore Open. PM Modi continuously encouraged sports - with Fit India Movement and Khelo India," Union Sports Minister Anurag Thakur said.

This was Sindhu's first Super 500 title this year; she had earlier won the Syed Modi International and Swiss Open – both Super 300 titles - and an addition to her brimming cabinet which has a gold, two silver and two bronze medals from the World Championships besides two Olympic medals. This was Sindhu's 18th career title.

The 27-year-old will be leading the Indian charge at the Commonwealth Games, starting July 28 in Birmingham.