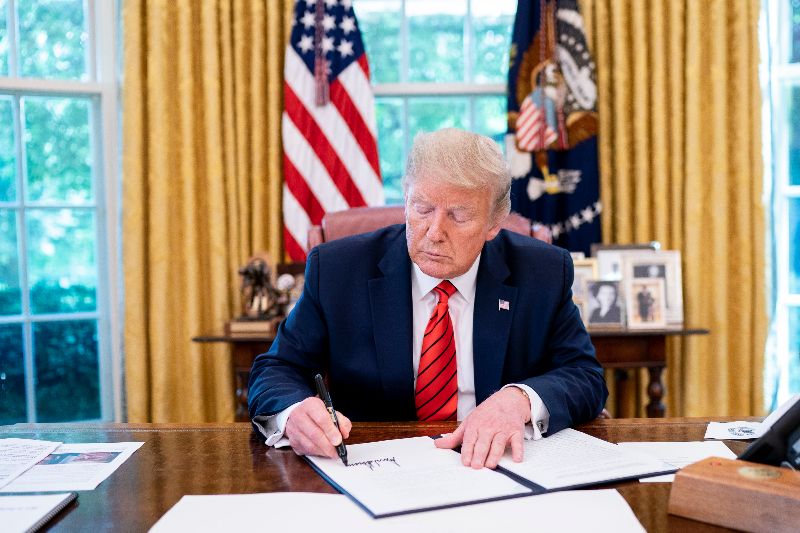 United States President Donald Trump on Monday temporarily suspended H-1B and other work visas till the end of the year as the administration seeks to reform the visa system and move towards merit-based immigration.

President Trump aims to reform the US immigration system to prioritise the highest-skilled workers and protect American jobs, according to a statement from the White House.

President @realDonaldTrump is taking common-sense action to put Americans first in line for jobs as we recover from the impact of Coronavirus. https://t.co/yGLJKHBn3j

Under the reforms, the H-1B programme will prioritise workers who are offered the highest wage, ensuring that the highest-skilled applicants are admitted, the White House added.

As COVID-19 spread across the globe, many U.S. workers were hurt through no fault of their own.

As America recovers, President @realDonaldTrump won't allow blue-collar and middle-class workers to stay on the sidelines and be replaced by new foreign labor. https://t.co/A68ueVC88u pic.twitter.com/tFRwGZE9jX

The temporary suspension of these foreign work visas is expected to free up to 5,25,000 jobs in the US, according to senior administration officials.

The issuance of new green cards will also remain halted through the end of the year.

The freeze will not affect those already in the US on the H-1B and the other work visa categories. Indians are the single largest group of H1-B visa-holders accounting for nearly 74 per cent of this category.

Alphabet and Google CEO Sundar Pichai tweeted, “Disappointed by today’s proclamation - we’ll continue to stand with immigrants and work to expand opportunity for all”.

Immigration has contributed immensely to America’s economic success, making it a global leader in tech, and also Google the company it is today. Disappointed by today’s proclamation - we’ll continue to stand with immigrants and work to expand opportunity for all.

Microsoft President Brad Smith said that this is not the correct time to cut the US off from the world's talent or create uncertainty and anxiety. He tweeted, "Immigrants play a vital role at our company and support our country’s critical infrastructure”.

His post was retweeted by Microsoft CEO Satya Nadella.

Now is not the time to cut our nation off from the world’s talent or create uncertainty and anxiety. Immigrants play a vital role at our company and support our country’s critical infrastructure. They are contributing to this country at a time when we need them most.

Describing the move as “shortsighted” Amazon, which received more H-1B visas than any other company in 2019, issued a statement as well.

Amazon opposes the Administration’s short-sighted decision to pause high-skill visa programs. Welcoming the best & the brightest global talent is critical to America's economic recovery. We will continue to support these programs & efforts to protect the rights of immigrants.

The decision was also criticised by Twitter, which issued a statement saying that the move undermines America’s greatest economic asset, which is its diversity.

Statement on US high-skilled immigration proclamation:

"This proclamation undermines America’s greatest economic asset: its diversity. People from all over the world come here to join our labor force, pay taxes, and contribute to our global competitiveness on the world stage.

"Unilaterally and unnecessarily stifling America’s attractiveness to global, high-skilled talent is short-sighted and deeply damaging to the economic strength of the United States." —@jesirae

Ivy League university Princeton also tweeted to say that they would “continue to welcome people of all backgrounds and nationalities.”

#PrincetonU would not be the institution it is today without the contributions of our international community members, nor would the U.S. be the same country without its long history of immigration.

We will continue to welcome people of all backgrounds and nationalities. pic.twitter.com/YU3KUJbFWQ