An Indian-origin former top federal prosecutor, Preet Bharara, who was fired by US President Donald Trump, said he is very proud of his Indian heritage which made him more compassionate and tolerant towards other people. 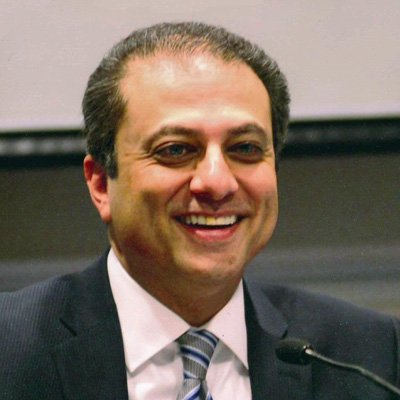 “I am an American, I happen to be an Indian-American. I am very proud of my background, my roots and my heritage. I am a huge Springsteen fan...but I also listen to Bhangra music, which is a kind of Punjabi music,” Bharara said during a conversation last week with New York University’s School of Law Dean Trevor Morrison.

Asked whether his heritage and background has shaped his personal and professional life, Bharara said he comes from a multi-cultural background and his children know about their “Indian heritage and also about being American”.

Bharara, the former US Attorney for the Southern District of New York, is now a distinguished scholar in residence at New York University’s School of Law where he continues working on issues like criminal and social justice, honest government, national security, and corporate accountability.

Bharara said people would ask him whether his being of Indian heritage and a member of a minority group made him more compassionate and tolerant towards other people.

“I say I suppose it does. But what has mattered more to how I think about things is not the fact that I am an Indian- American but that I am an immigrant,” he said adding that he and his family are grateful for what America has given them.

He recalled how his father came to the US with nothing but 40 years later his son became the chief federal law enforcement officer in the financial capital of the world.

“The first Indian-American US attorney appointed by the first African-American US President. That is not a small thing in the minds of some people...So I began to appreciate that,” he said.