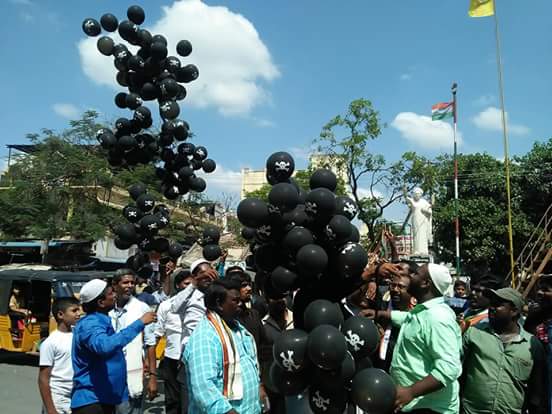 Black balloons have been raise in protest against PM Modi and the Central government in other south Indian states, including Tamil Nadu and Kerala. Photo courtesy: Twitter/@INCTirupattur

As per visuals, the balloons were released while Modi's helicopter was taking off in Vijaywada. PM Modi is in Hyderabad to attend the BJP's National Executive meet.

Before Modi's arrival, at around 8:30 am, three people, Sunkadara Padmashree, Parvathi and Kishore, were seen walking towards the airport with balloons. They were stopped.

Ravi Prakash has been taken into custody while Rajeev Ratan is missing. The police are looking for him.

Some Congress leaders were protesting at the airport where PM Modi's chopper took off. They were seen holding black balloons and placards as they shouted slogans targeting the Prime Minister.

Looking back, Modi was stuck on a flyover in Punjab for 15-20 minutes on May 1, due to blockade by some protesters and returned without attending an event at a martyrs' memorial.

Reacting sharply, the Union Home Ministry had asked the Punjab government to fix responsibility for the serious lapse and take strict action.

The PM also could not attend a rally in Punjab's Ferozepur.

The prime minister had landed at Bathinda from where he was to go to the national martyrs' memorial at Hussainiwala by helicopter.

Due to rain and poor visibility, the prime minister waited for about 20 minutes for the weather to clear.

"When the weather did not improve, it was decided that he would visit the national martyrs' memorial via road, which would take more than two hours. He proceeded to travel by road after necessary confirmation of security arrangements by the DGP Punjab Police," the statement said.

The Supreme Court heard a plea on the breach of Modi's security in Punjab.