In a novel exhibition of multiculturalism and showcasing the multiracial mosaic of Singapore, Prime Minister Lee Hsien Loong along with 40,000 devotees attended the re-consecration ceremony of the 164-year-old iconic Sri Srinivasa Perumal Temple on the island nation. The ceremony was organised following the completion of the SGD4.5 million restoration work undertaken at the temple. 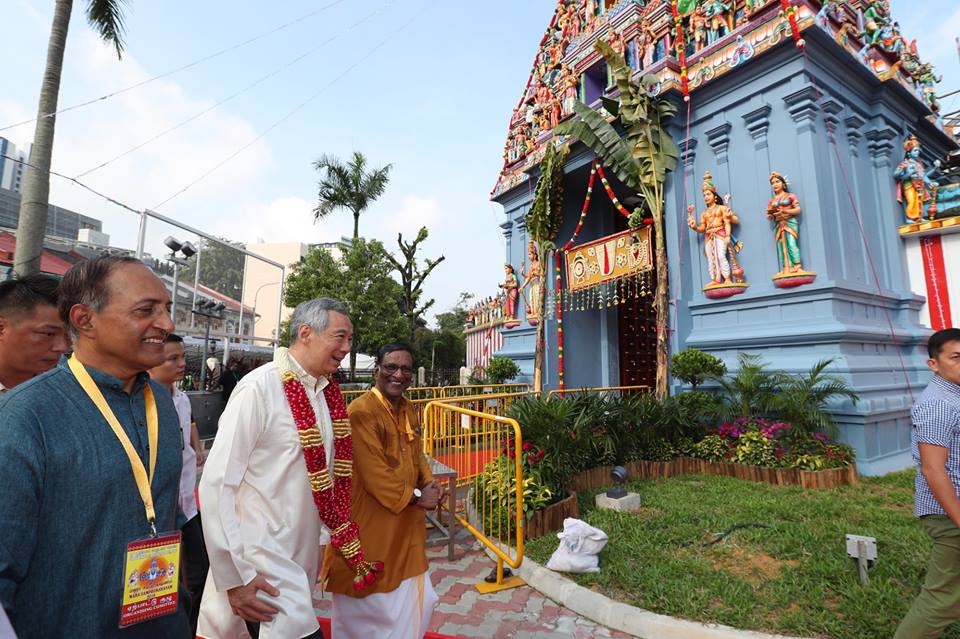 “Happy to join the Hindu Endowments Board, Hindu Advisory Board, temple management committee, faith and community leaders and thousands of devotees for the re-consecration ceremony of Sri Srinivasa Perumal Temple this morning,” said PM Lee in a Facebook post. This is the first time that Prime Minister of Singapore has attended re-consecration ceremony of a temple since assuming office in 2004. 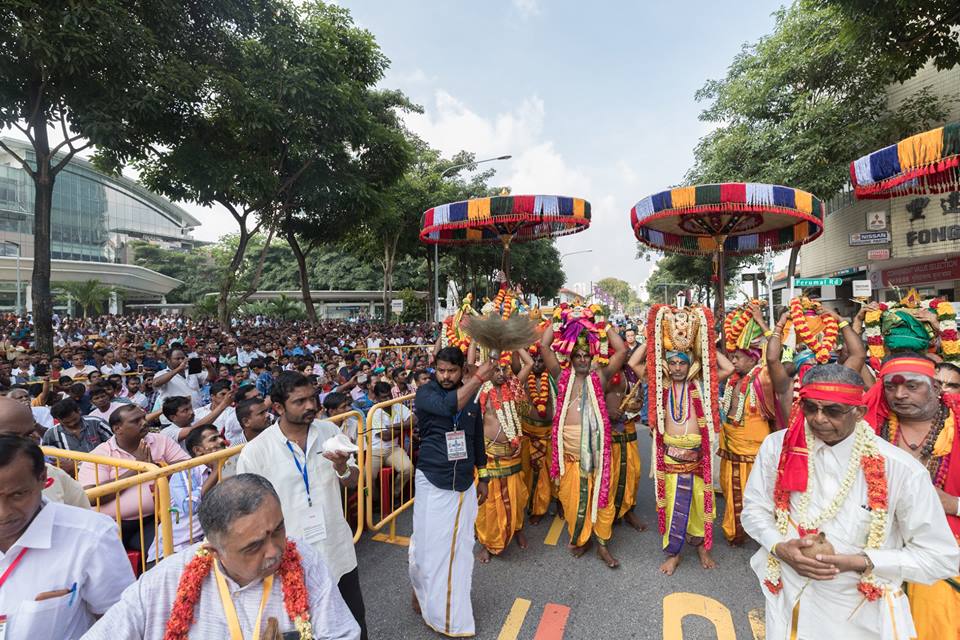 Devotees braving the hot sun to witness the consecration ceremony of Sri Srinivasa Perumal Temple. The priests are carrying the vessels with holy water from Perumal Road to the temple towers. Photo courtesy: Facebook page of PM Lee

“This 164-year-old temple has been undergoing renovations for the last 1.5 years to prepare for its re-consecration, which takes place every 12 years,” he added.

In the re-consecration ceremony called as ‘Maha Samprokshanam’, holy water was accumulated in the gadams (sacred vessels) which was sprinkled on the nine pinnacles of the temple and the statue of deity Sri Srinivasa Perumal, also known as Lord Vishnu, located within the temple’s main sanctum.

The ceremony will be followed by a period of 45 days of cultural programmes known as the ‘mandalabishegam’. 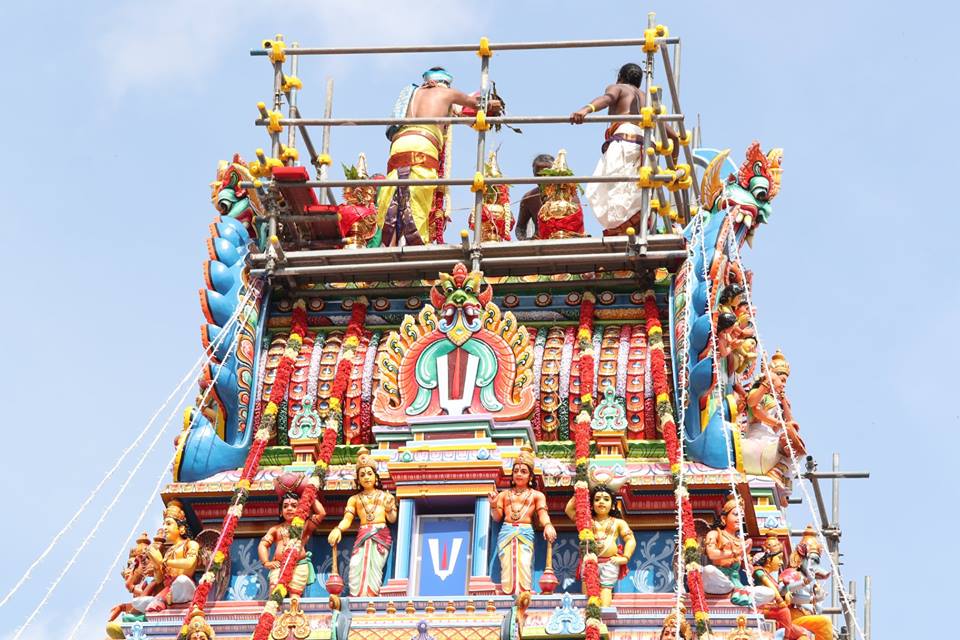 Priests pouring holy water on the temple pinnacles to re-sanctify the deities. The water was drawn from nine holy rivers in India and brought to Singapore. The priests have been praying twice a day for for the last six days in preparation for the consecration. Photo courtesy: Facebook page of PM Lee

About 40,000 Hindu devotees attended the re-consecration ceremony, held on an auspicious date from the Hindu almanac.

S Iswaran, Minister of Trade and Industry of Singapore, who also attended the ceremony spoke about the diversity in Singapore community and the PM Lee commitment to it.

“The prime minister's presence here today, having travelled overnight from overseas (Commonwealth meetings in London), is a remarkable validation of the commitment the government has, that PM Lee also has, to this,” said Iswaran.

“It is an opportunity to bring together different communities so that we develop this mutual understanding and respect and continue to build on Singapore's multi-racial fabric,” he added.

Chan Chun Sing, Minister in the Prime Minister’s Office of Singapore said in a Facebook post, “Such events indeed, reflect the diversity as well as the harmony we have in our multi-religious, multiracial society.” He was also present on the occasion. 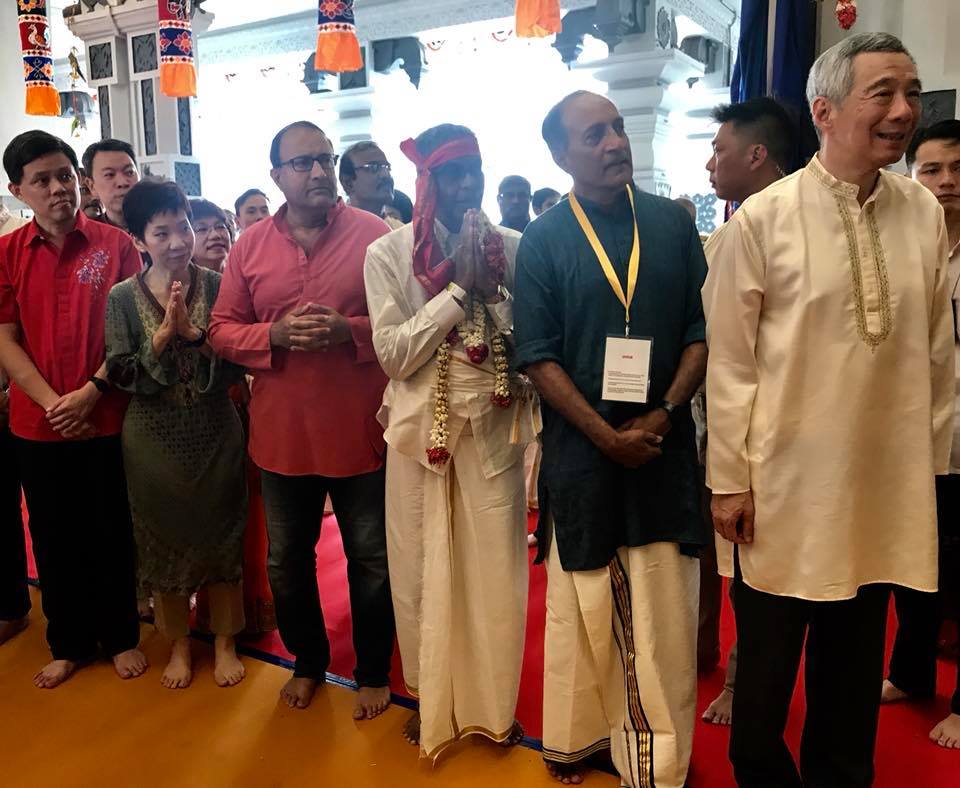 In addition to this, Grace Fu, Minister for Culture, Community and Youth, and Janil Puthucheary, Senior Minister of State for Education, Communications and Information, were present on the occasion.

Built in the 1854, Sri Srinivasa Perumal Temple plays a yearly role as one of the start points for the Thaipusam procession. This is the fourth time renovations have been undertaken since it was declared a National Monument by the Preservation of Monuments Board in 1978.