Indian Ambassador to the United States Harsh Vardhan Shringla called on President Donald Trump at the Oval Office at the end of his term, marking the first time in recent history that a US President has met an outgoing Indian Ambassador. Shringla reportedly thanked Trump for attaching importance to the India-US partnership. 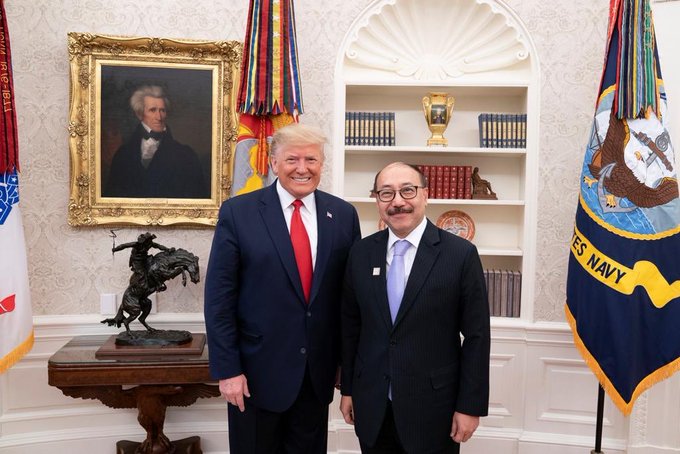 "Amb Harsh Shringla, who is proceeding to New Delhi to take up his assignment as Foreign Secretary, called on Trump at Oval Office of the White House and thanked him for his steadfast support for strengthening the India-US strategic partnership," the Indian Embassy in Washington DC said in a tweet on Sunday.

Shringla, 57, is scheduled to take up the next assignment as India's Foreign Secretary from January 29.

Shringla, who arrived in the US on January 9, 2019 played a key role in bringing the India-US relationship back on track, especially in the second half of the year, which witnessed the historic ‘Howdy, Modi’ event which saw Trump and PM Narendra Modi share the stage in a display of great bonhomie.

Before taking the Dubai-bound Emirates flight from the Dallas International airport on Sunday morning, Shringla tweeted, "A final goodbye", along with his pictures, one in the lawns of India House, the official residence and another at the entrance of the Indian Embassy in downtown Washington DC.

"Bitter sweet moments in Washington this evening wishing. Ambassador Shringla adieu from the US but knowing that he will be shepherding us from Delhi," tweeted Sandeep Chakravorty, the Indian Consul General in New York.

Envoys of several diplomatic missions, including those from neighbouring nations and African countries, had attended Shringla's farewell, reflecting his popularity in Washington's diplomatic community.

Before leaving the country, Shringla met top US Congressional leaders, including House of Representatives Majority Leader Steny Hoyer and thanked him "for his understanding and support" of India-US relations. He also called on Secretary of State Mike Pompeo.