oBike instructed to remove bicycles from public spaces by July 4

Peeved over the cluttering caused by bicycles on the public streets of Singapore, Land Transport Authority (LTA) has instructed bike sharing firm oBike to work with its liquidator to remove its bicycles from public spaces by July 4.

Issuing a stern warning to oBike, LTA said, "Should there be unremoved oBike bicycles after this date, LTA will progressively remove these bicycles from public spaces.” 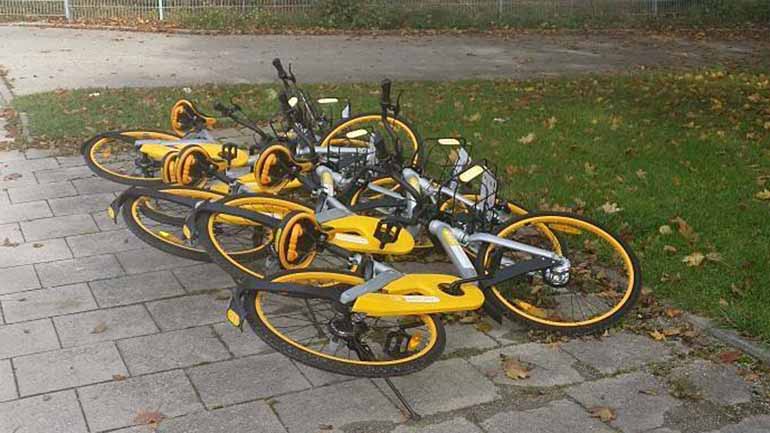 There is growing concern over cluttering of bicycles on the public spaces of Singapore as bike sharing firm oBike made sudden announcement on June 25 that it has stopped operations in the country. Photo courtesy: charivari.de

“oBike or its liquidator will have to pay the relevant towing and storage fees in order to claim impounded bicycles from LTA,” it added.

There is growing concern in Singapore as 14,000 cycles of oBike are currently left abandoned on streets, pavements and parks all over the country following the company’s sudden announcement last Monday (June 25) that it has stopped operations in Singapore, citing difficulties in meeting the new requirements put in place by LTA to tackle indiscriminate parking.

Further, LTA and Consumers Association of Singapore (CASE) have emphasised to oBike the importance of refunding users their deposits which were placed earlier with the company.

Meanwhile, there is growing resentment among the people failing to get deposit refunds from oBike.

CASE announced that it had received about 772 complaints from oBike customers asking for deposit refunds till 5pm on Thursday. Majority of the cases were lodged over the last four days.

Consumers will be unable to pursue legal claim from oBike. As soon as oBike's liquidation commences, there will be a stay of proceedings on litigation action and customers will not be able to proceed with any claims against the company.

Giving advice to the people CASE said, “Once the company is in liquidation, affected consumers should file their Proofs of Debt against oBike with the appointed liquidator. Consumers should also attach copies of any relevant receipts or other supporting documents to the Proof of Debt form.”