A recent study by scientists from the National University of Singapore (NUS) found that plastic nanoparticles could potentially contaminate food chains and ultimately affect human health.

These nanoplastics – less than one micrometre in size – are easily ingested by marine organisms, and they accumulate in the organisms over time.

With this comes the risk of them being transferred up the food chain, threatening food safety, said a press release by NUS.

The NUS research team used an acorn barnacle as a model organism to demonstrat for the first time that nanoplastics consumed during the larval stage are retained. These plastics accumulate inside the barnacle larvae until they reach adulthood.

“We opted to study acorn barnacles as their short life cycle and transparent bodies made it easy to track and visualise the movement of nanoplastics in their bodies within a short span of time,” said Mr Samarth Bhargava, a PhD student from the Department of Chemistry at the NUS Faculty of Science, who is the first author of the research paper. 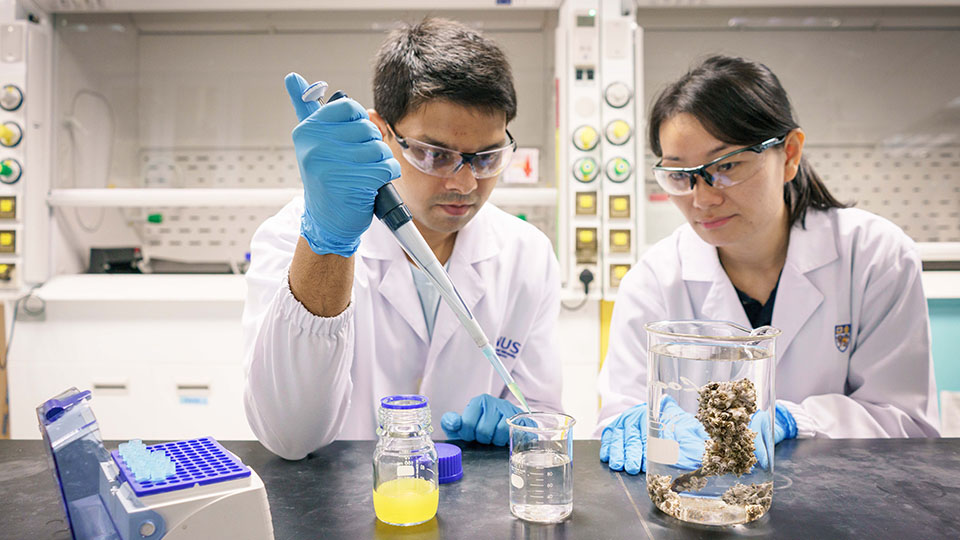 A research team from the National University of Singapore discovered that nanoplastics are easily ingested by barnacle larvae and they can accumulate in the bodies of the larvae over time. Mr Samarth Bhargava (left) and Ms Serina Lee (right) are members of the research team. Photo courtesy: NUS

“Barnacles can be found in all of the world’s oceans. This accumulation of nanoplastics within the barnacles is of concern. Further work is needed to better understand how they may contribute to longer term effects on marine ecosystems,” added Dr Serena Teo, Senior Research Fellow from the Tropical Marine Science Institute at NUS, who co-supervised the research.

Marine biologist Dr Neo Mei Lin from the Tropical Marine Science Institute at NUS, who is one of the authors of the paper, said, “Barnacles may be at the lower levels of the food chain, but what they consume will be transferred to the organisms that eat them."

"In addition, plastics are capable of absorbing pollutants and chemicals from the water. These toxins may be transferred to the organisms if the particles of plastics are consumed, and can cause further damage to marine ecosystems and human health."