To curb the menace of NRIs deserting their wives soon after marriage, a bill has been enacted that makes the registration of marriage compulsory within 30 days, failing which the groom may lose passport and property as well.

Introducing the bill  in Rajya Sabha, the Upper House of Parliament, Minister of External Affairs Sushma Swaraj sought to amend the existing laws under Passport Act of 1967 to empower the passport authority to revoke or impound the passport or travel documents of an NRI, if it is brought to notice that he has not registered the marriage within the period of 30 days.

The Registration of Marriage of Non-Resident Indian Bill, 2019, also seeks to amend the Code of Criminal Procedure, 1973, to empower the courts for issuance of summons, warrants through the specifically designated website of Indian Ministry of External Affairs. 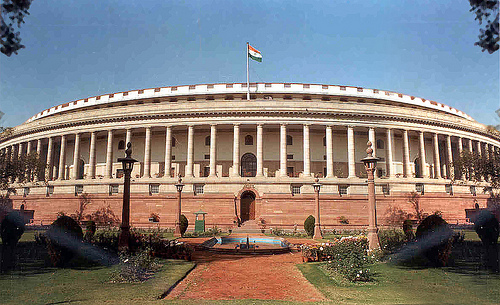 The compulsory registration of marriage within 30 days of marriage in India or abroad would provide better enforcement of rights of the deserted spouse under various family laws. Photo courtesy: Wikimedia

The amendment would further provide for attachment of properties, both moveable and immovable, belonging to a proclaimed offender, if he does not appear before the Court and is declared as Proclaimed Offender by the Court.

Terming the bill as "path breaking", the ministry in a statement said the bill is an outcome of a joint initiative of the Ministry of External Affairs, Ministry of Women and Child Development, Ministry of Home Affairs and Ministry of Law and Justice.

"The objective of the Bill is to create more accountability and offer more protection against exploitation of Indian women by their NRI spouses," it said.

According to the provisions of the Bill, the compulsory registration of marriage within 30 days of marriage in India or abroad would provide better enforcement of rights of the deserted spouse under various family laws.

The introduction of the Bill was necessitated by the MEA due to numerous complaints received from Indian nationals mostly women deserted or harassed by their Non-Resident Indian spouses. 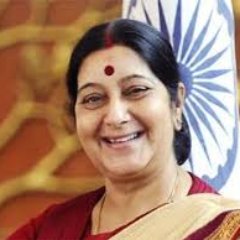 Introducing the bill in Rajya Sabha, the Upper House of Parliament, Minister of External Affairs Sushma Swaraj sought to amend the existing laws under Passport Act of 1967. Photo courtesy: Twitter/@MEAIndia

As per latest records, The Ministry so far has cancelled one passport and impounded, revoked 20 passports of erring spouses based on the complaints received. The MEA has addressed as many as 4,985 complaints between January 2015 and November 30, 2018 of distressed married women who have been deserted by their NRI husbands.

The redressal has been by way of providing them counselling, guidance and information about procedures, mechanisms for serving judicial summons on the Overseas Indian husband; filing a case in India, issuing Look Out Circulars; impounding and revocation of Indian passport of the husband; getting access to lawyers and NGOs empanelled with Indian Missions etc.

The ministry has been receiving and redressing grievances from women deserted by their NRI spouses from whole of India which pertains to abandonment, harassment, cheating, domestic violence by their spouses residing abroad, to ascertain whereabouts of NRI husbands, request for extradition, deportation of spouse to India, request for maintenance, support, divorce or child custody and request for legal and financial assistance to file a case against the NRI spouse.

The assistance is released to the empanelled legal counsel of the applicant or Indian Community, Association, Women’s Organisation, NGO concerned to enable it to take steps to assist the woman in documentation and preparatory work for filing the case.

Besides this, Indian missions  in thirteen countries are offering assistance to Indian women abroad who have been abused and abandoned by their overseas Indian husbands. These are the United States, United Kingdom, Canada, Australia, New Zealand, Malaysia, Singapore, and the Kuwait, Bahrain, Qatar, Saudi Arabia, Oman and United Arab Emirates (UAE) in the Gulf.