Nitin Gadkari at ASEAN-India PBD Singapore: Come to India, we are ready to create a joint venture 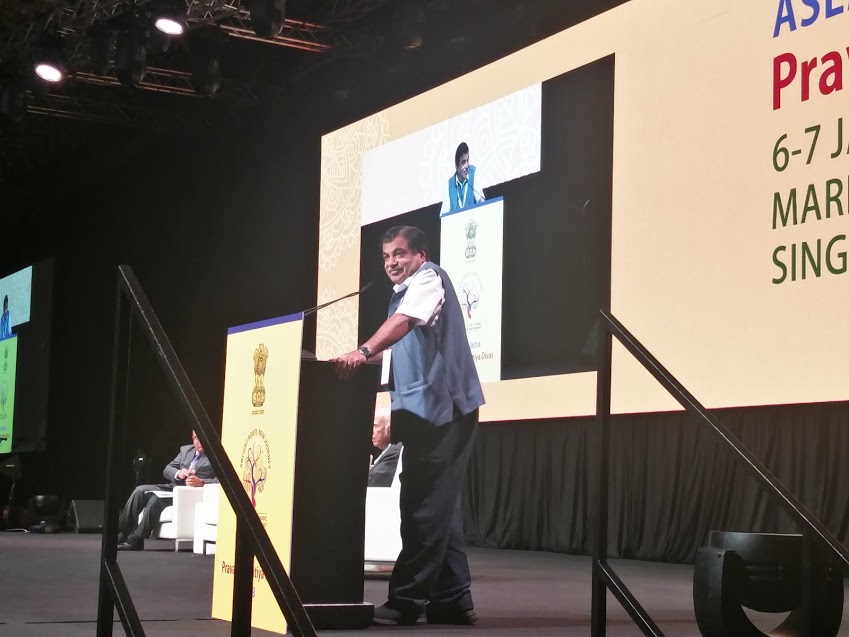 “As far as India is concerned, our Prime Minister Narendra Modi has decided to give the highest priority for development of infrastructure in the country,” he said.

“We are the fastest growing economy. Water, power, transport and communication – these are the four important keys which very important for our development,” the Minister said at the two-day event which is celebrated every year to mark the contribution of the overseas Indian community in the development of India.

Gadkari continued to talk about the infrastructure in India. He said, “When our new government had taken charge, I was responsible for road ministry. Roads first came to two km per day and today it comes to 28 km per day. And our target is for 40 km per day. In India, we have 5,200,000 km of road length. Out of which, 96,000km is for the national highway. We have decided to increase it to 200,000 km.”

“Pollution is a big problem, so we have decided to give public transport a higher priority. Today we are moving fast to making new express highways, ring roads. We have a big project launched by the Prime Minister. We are expecting road construction of around INR750,000 crore. Already, we have crossed the limit of INR 600,000 crore. We don’t have a financial problem as far as road construction is concerned, but still, those who want to invest in the road sector are welcome,” he added.

“The traffic density is good in India,” Gadkari continued. “Regarding the Bharatmala programme, we have already completed 24,000 crores. The first express highway of India was the Mumbai-Pune highway. Now, the new expressway bypassing Delhi is going to solve the problem of traffic jams and pollution by 50 per cent. People coming from Punjab, Haryana, Rajasthan, Himachal Pradesh, Uttarakhand and Uttar Pradesh to Delhi won’t have to enter the city. We are going to complete this road within a month.”

“We are already making routes in the North East. In the road sector, we are moving fast. We are now connecting India to Myanmar, Bhutan, Nepal and we have already sanctioned projects worth INR35,000 crore for that and 60-70 per cent of the project has already been started,” said the minister.

“At the same time, one important sector is shipping and ports. When I had taken charge as the minister, the profit from ports was INR3,000 crore, the next year it was INR4,000 crore, and for this year we are expecting a profit of INR7,000 crore,” he added.

“Come to India, we are ready to make a joint venture,” said the Minister, quoting more than 100,000 cruise passengers coming to India from Singapore.

Summing up the speech, the minister said, “Now, clean Ganga is our mission. Some of the companies in the UK are ready to take the sponsorship of giving developments of ghats in Uttarakhand, Uttar Pradesh and Bihar. And for the water recycling project, we are using the best technology in the world.”

Gadkari served as the president of the Bharatiya Janata Party (BJP) from 2010-13, is known for the works during his tenure as a Public Works Department Minister in the state of Maharashtra when he constructed a series of roads, highways and flyovers across the state, including India’s first six-lane concrete expressway -  the Mumbai-Pune Expressway.