Nikki Haley: Everybody knows’ Russia meddled in 2016 US elections

American Ambassador to the UN Nikki Haley said today that “everybody knows” Russia meddled in the 2016 elections and now they were trying to “save face”, despite US President Donald Trump refusing to say they did. Defending Trump, Haley said Trump confronted Russian President Vladimir Putin on the election meddling at their first face-to-face encounter at the G20 Summit on Friday.

"Everybody knows that Russia meddled in our elections," @nikkihaley tells @DanaBashCNN #CNNSOTU https://t.co/bwQw7Zx3uH

“What I understand is that President Trump let them know that, look, we know you did this (meddled in US elections), and cut it out. And President Putin is never going to admit that they did it. And so they have to come back and they have to defend themselves,” Haley, an Indian-American, told CNN. 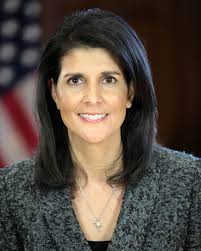 Haley’s position appeared in contrast to what Trump said after meeting Putin. The US President has tweeted that Putin “vehemently denied” interfering in the Presidential election. And the US President has appeared hesitant to blame Russia, saying other countries could have been involved, “nobody really knows for sure.” But Haley said Trump raised the issue “for a reason”. “One, he wanted him to basically look him in the eye, let him know that, yes, we know you meddled in our elections. Yes, we know you did it. Cut it out… They’re going to always have two different stories on this,” she said.

“At the end of the day, what was most important was for President Putin to hear from President Trump, we know you did this, we didn’t like it, don’t do it again,” Haley said. “We have to now see where it goes from here,” she said. Defending Trump’s decision to have a joint working group with Russia on cyber security, Haley said there is a need to work together with Russia. “You are always going to see the Democrats are repeatedly criticising the President. That’s unfortunate. Republicans are going to criticise Democrats. That’s unfortunate.