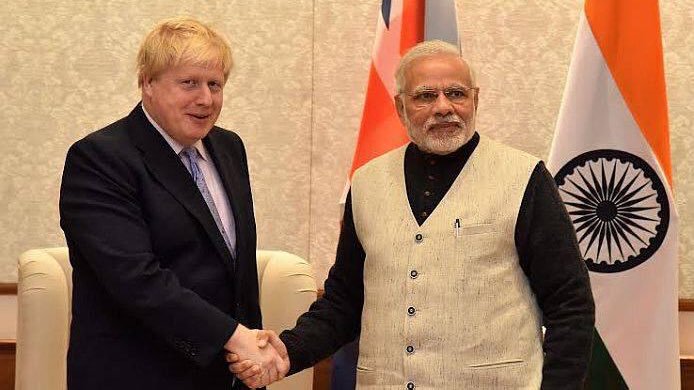 In a letter earlier this month, Johnson had played up his personal relationship with Prime Minister Modi. Photo courtesy: Twitter/@BorisJohnson

The 55-year-old former London Mayor, one of the foremost proponents for Brexit in the ruling Conservative Party, had made a special effort to reach out to the Indian diaspora base of the party during the month-long leadership race and pledged not only closer trade ties but also easier access for Indian professionals and students.

"Boris is committed to securing a new and improved trading relationship with our friends in India and ensuring that the values we share the rule of law, democracy and dynamic entrepreneurial spirit should be at the heart of one of our most important partners on the global stage," said Priti Patel, one of the senior-most Indian-origin Tory MPs who is expected to be a part of the new premier's ministerial team.

Johnson on Tuesday beat foreign secretary Jeremy Hunt in the race to be crowned the new Conservative Party leader amid the political uncertainty over the country's divorce deal with the European Union.

In a letter earlier this month, Johnson had played up his personal relationship with Prime Minister Modi as he promised to deliver a "truly special UK-India relationship".

"When I was with Prime Minister Modi, I stressed that the UK and India are two modern democracies who should work closely together to promote trade and prosperity, improve global security and tackle the challenges our countries face,” Johnson wrote in an open letter addressed to the Indian diaspora Tory membership base.

“If I am elected Conservative Party Leader and Prime Minister, I will work closely with our friends in the Indian Government, business and society to deliver a truly special UK-India relationship,” he said.

In keeping with his firm pro-Brexit stance and determination to leave the European Union (EU) by the October 31 deadline, the senior Tory MP branded it a "travesty" that the 28-member economic bloc had failed to treat free trade agreement (FTA) talks with India as a priority for over a decade.

It’s time to get to work to deliver Brexit by 31st October, unite the party, defeat Jeremy Corbyn - and energise our country!

Johnson is set to take formal charge at Downing Street on Wednesday after Theresa May hands in her resignation to Queen Elizabeth II at Buckingham Palace.