Thousands of people are expected to march through London for a major demonstration calling for a Final Say referendum on Brexit on October 19 even as European Union and British negotiators are in session for round-the-clock negotiations. 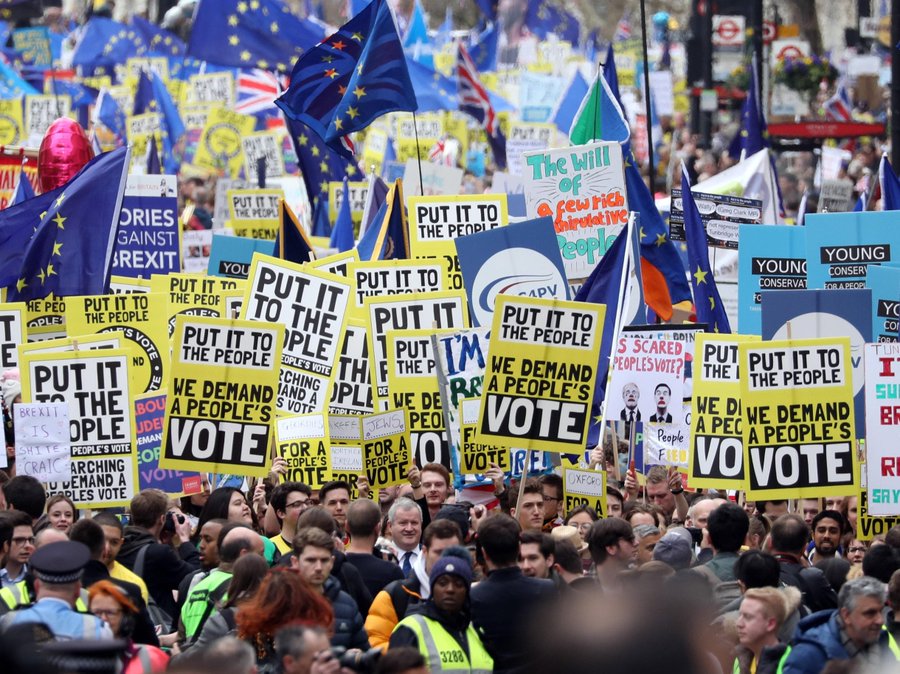 Campaigners are calling on the government for a Final Say vote on any Brexit agreement or no-deal outcome. Photo courtesy: Twitter/@peoplesvote_uk

Organised by the People’s Vote campaign and supported by the United Kingdom (UK) daily newspaper The Independent, the march will take place just two weeks before the UK is scheduled to leave the EU.

The march is taking place at midday on Saturday, October 19, as MPs meet for an emergency sitting in the House of Commons in a bid to solve the Brexit impasse.

Protesters will assemble at Park Lane before walking along Whitehall towards Parliament Square, where cross-party politicians and celebrities will address the crowds.

Campaigners are calling on the government for a Final Say vote on any Brexit agreement or no-deal outcome.

The UK and the European Union have in the meanwhile moved closer to agreeing upon a draft plan for Britain to leave the bloc, people familiar with the talks said.

EU chief negotiator Michel Barnier told a meeting of government ministers earlier in Luxembourg that a deal on a draft Brexit text was needed if he was to recommend that EU leaders sign off on an agreement when they meet later this week.

“Talks are difficult but I believe an agreement is still possible,” Barnier said on Twitter, after speaking with UK Brexit Secretary Stephen Barclay.

Barnier is due to brief EU ambassadors on his decision on Wednesday in Brussels.

In London, UK Prime Minister Boris Johnson on Tuesday met with some of his Conservative party’s strongest Brexit supporters and with the leaders of the Democratic Unionist Party (DUP), the Northern Ireland party that supports his government in Parliament. After the meeting, DUP leader Arlene Foster said that “gaps remain and further work is required.”

Irish Prime Minister Leo Varadkar told reporters in Ireland that “initial indications are that we are making progress, that the negotiations are moving in the right direction. But whether we’ll be able to conclude a revised withdrawal agreement… in time for the summit on Thursday, that’s as of right now unclear.”