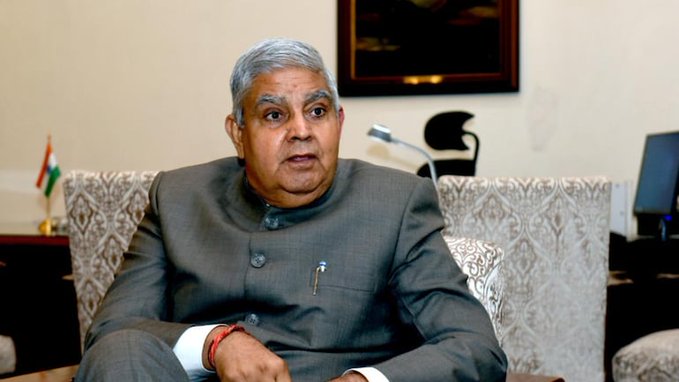 Dhankhar, who is a lawyer by profession, joined politics in 1989. Photo courtesy: Twitter

725 out of 780 MPs voted for the Vice Presidential Election. Two BJP MPs - Sunny Deol and Sanjay Dhotre, who are unwell, did not vote. Dhankhar won the election comfortably with 528 votes against Margaret Alva's 182.

Members of Parliament of both Houses vote to elect the Vice President of India. Dhankhar, who is a lawyer by profession, joined politics in 1989.

He joined the Congress when PV Narasimha Rao became the prime minister. But with the rise of Ashok Gehlot in Rajasthan, he changed ships to the BJP.

He became the governor of West Bengal in July 2019 and has made headlines since then over his tumultuous relations with the Mamata Banerjee government.

He tendered his resignation as the Governor of West Bengal after being nominated as VP candidate by BJP-led NDA.

Margaret Alva was in the spotlight in 2008 for raising her voice against the Congress’ ticket distribution in Karnataka and alleging that the tickets were open to bidders.

Alva was elected to the Rajya Sabha as a Congress representative in 1974. She served a six-year term and was re-elected for three more years.

Margaret Alva has served as the Governor of Goa, Gujarat, Rajasthan and Uttarakhand during her administrative stint.