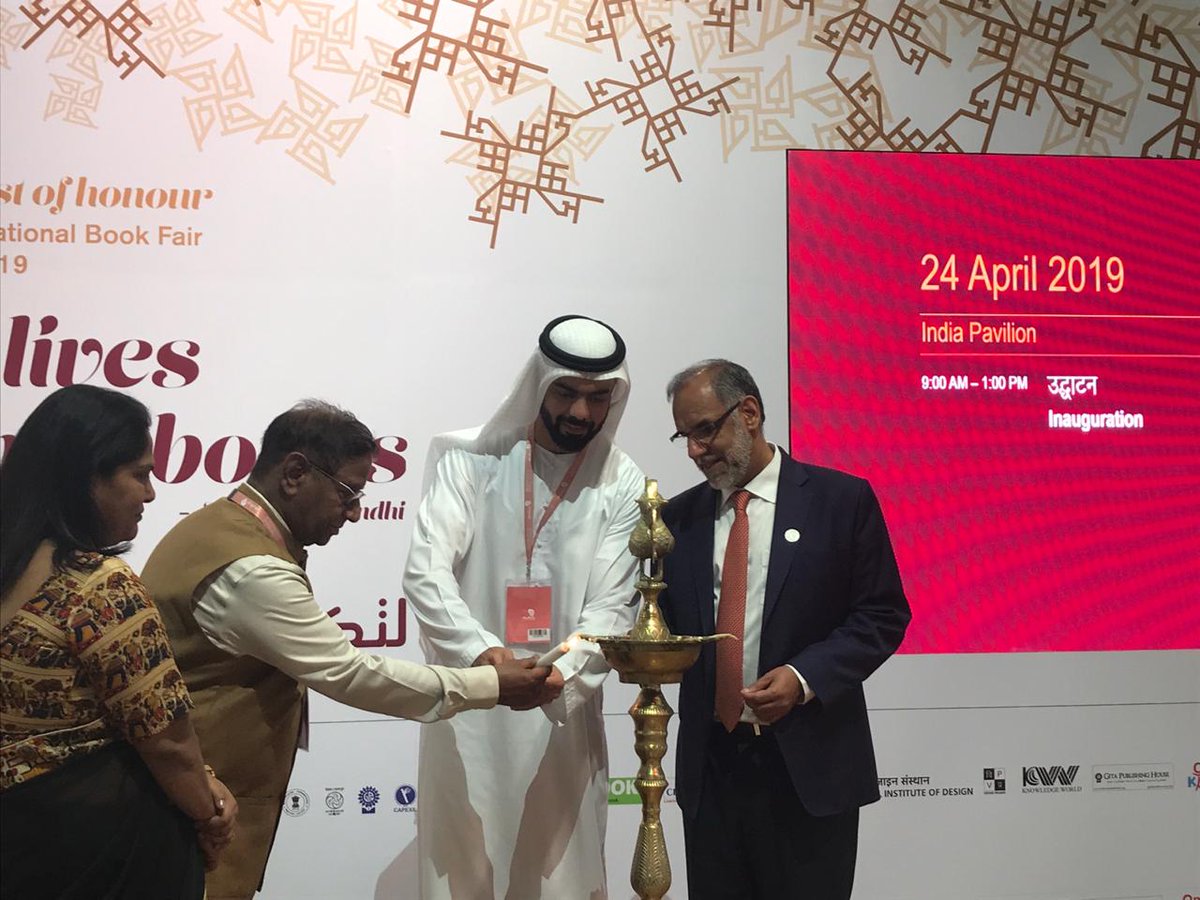 Indian Ambassador to UAE Navdeep Suri at Inauguration of the Indian Pavilion at Abu Dhabi International Book Fair 2019. Photo courtesy: Ministry of I & B

India is the Guest of Honour for ADIBF 2019  this time. India’s participation at the Fair is expected to attract significant visitor numbers, with various events and activities held throughout the entire duration of ADIBF. These activities encompass the fields of literature, culture, art, music, cinema and dance.

India’s participation will also provide a chance for investors to explore and capitalise on the opportunities offered by the Indian groups and publishers that are present in the GCC. The Indian Pavilion will also host Indian writers, authors and literary scholars who will serve as ambassadors for the literature and art of their country.

"ADIBF 2019 is expected to be a vibrant cultural event and an art and folklore festival with India’s presence showcasing its languages, creative products and publishing industry," an official statement from the fair authorities said.

Special Events at ADIBF 2019 showcase a session on a discussion between Indian Ambassador to UAE Navdeep Suri and eminent UAE-based journalist Bikram Vohra on Suri’s latest book ‘Inked in Blood and Spirit of Freedom’.

For the 29th edition of the #ADIBF2019, a whole pavilion is dedicated to the Guest of Honour; India. A host of performers, esteemed authors and noteworthy speakers will take visitors on a tour of the country’s rich culture and literature#InAbuDhabi@InAbuDhabi @IndembAbuDhabi pic.twitter.com/vHrQj0NlOe

The book is based on the poem ‘Khooni Vaisakhi’ written by legendary Punjabi writer and the father of Punjabi literature Nanak Singh, who is also author’s grandfather. The poem, translated into English for the first time by Suri, is probably the only survivor’s account of the worst atrocity under British Raj – the Jallianwala Bagh massacre which took place in Amritsar on April 13, 1919, the Vaisakhi day.

Suri discusses how this event changed the course of India’s struggle for freedom, providing context for the incident and detailing how people of various faiths came together to stand up to colonisation and oppression in one of India’s darkest moments.

Another session is in the book ‘My Little India’ by Manoj Das, one of the most respected names in contemporary Indian literature, having written short stories and novels for both children and adults in English as well as in Odia, his mother tongue.

His writings on Indian philosophy, mysticism and spiritualism have been published widely in India and abroad during the last six decades of his writing career. S Gopalakrishnan, the UAE-based Malayalam writer and journalist, will moderate discussion on Indian values in the changing milieu in the event list this Sunday.

On the first day of the fair, author Birad Rajaram Yajnik discussed the ideals of peace, truth and ahimsa (non-violence) espoused by Mahatma Gandhi, examined in his book ‘Exploring the Life of the Mahatma’. The session explored Mahatma Gandhi and his values using milestones from his life as catalysts.

Weaving a journey through the life and messages of the Mahatma, the talk covered the major incidents which influenced his philosophy, his political awakening and his concept of Ahimsa, aiming to inspire and empower the audience to influence their future. 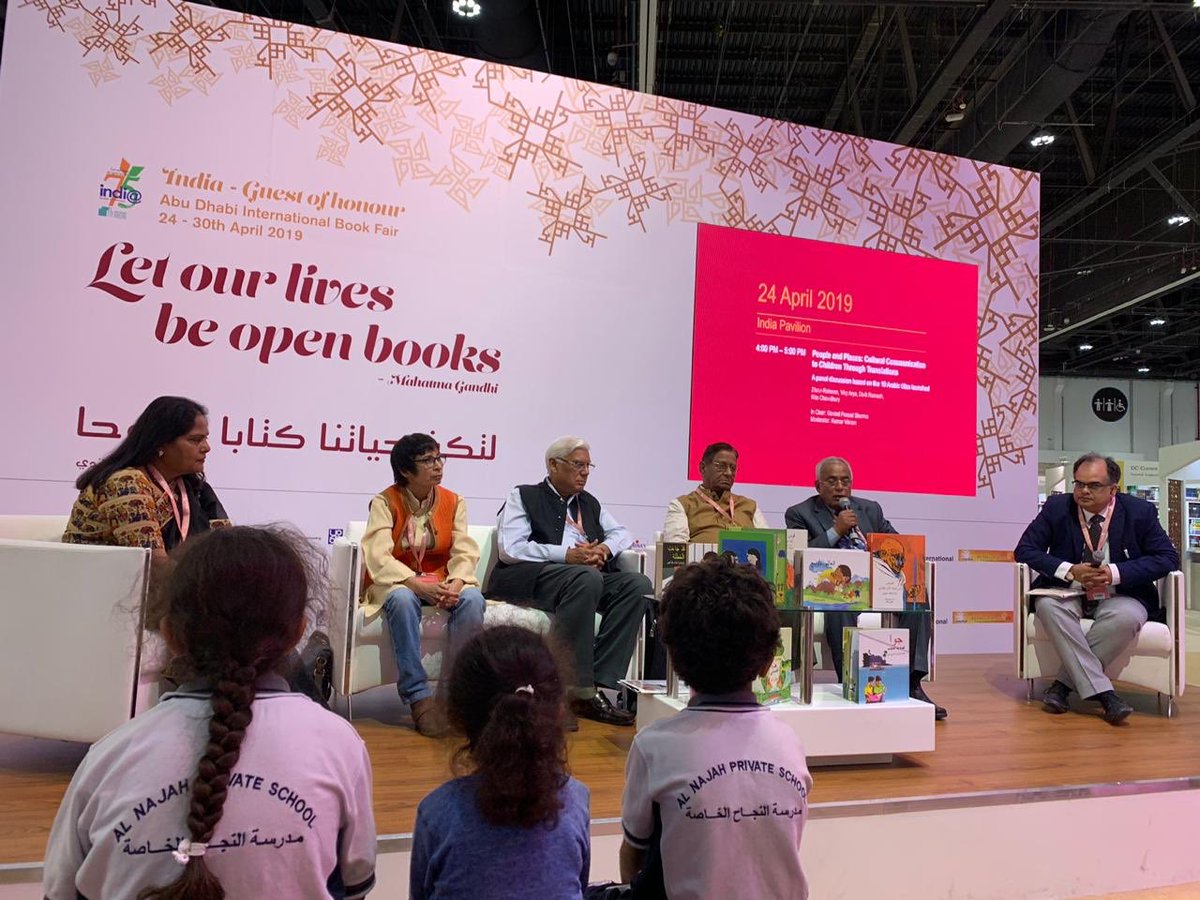 Yajnik is an author of fine print books on India and subjects of Indian origin. In 2010, a special edition of his book ‘MKG: Imaging Peace, Truth and Ahimsa’ was released at the United Nations by the President of India to mark the International Day of Non-Violence. His title ‘The Great Indian Yoga Masters’ has been translated into nine international languages and distributed across the world.

Yajnik is Curator of the Mahatma Gandhi Digital Museums at Hyderabad, Delhi, Johannesburg, and Pietermaritzburg. He is also a trustee of the Indira Gandhi National Centre for the Arts, India’s foremost art institution and a member of the Prime Ministers of India Museum.

The fair also features the ‘Kutle Khan Project’ a unique collective of Rajasthani folk musicians highlighting Kutle Khan, a multi-talented folk musician who has performed on various stages across the world. His music is as seductive as it is rhythmically complex. He embodies the rich melodic and sophisticated rhythmic traditions of Rajasthani folk music and his performances are informed by his understanding of contemporary Indian and Western musical traditions.

The @kutlekhan Project had people swaying to their hypnotic performance tonight at the #ADIBF2019. Mark your calendars for tomorrow featuring the famed Harpreet Band at 9pm on the Main Stage#InAbuDhabi@InAbuDhabi @ADNECGroup pic.twitter.com/zQ2yA8AVzd

Then, there is Jasbir Jassi, popular Punjabi folk singer with his music rooted in rich Punjabi culture that celebrates vivacity and unbridled expression. Traditional Punjabi folk music is centred on instruments like the ektara and the dhol, which though rustic, have an uncanny effect of getting people out of their seats and dancing.

Jassi shot to fame with the hit song ‘Dil Lai Gayi Kudi Gujarat Di’ and consequently went on to record songs for popular films and release several solo albums. He has collaborated with famed music producers Ehsaan and Loy and performed at the Cannes Film Festival in 2012. He is one of the most familiar voices of Punjab.