NASA shared a stunning image on Instagram taken by its New Horizons spacecraft, showing Pluto's true colours. The photo, taken at a distance of 22,025 miles (35,445 km) from Pluto, also shows its 'heart' -a gigantic glacier made of nitrogen and methane. Pluto's surface is coated in ice made of water, methane, and nitrogen and is believed to have a rocky core and possibly a deep ocean. 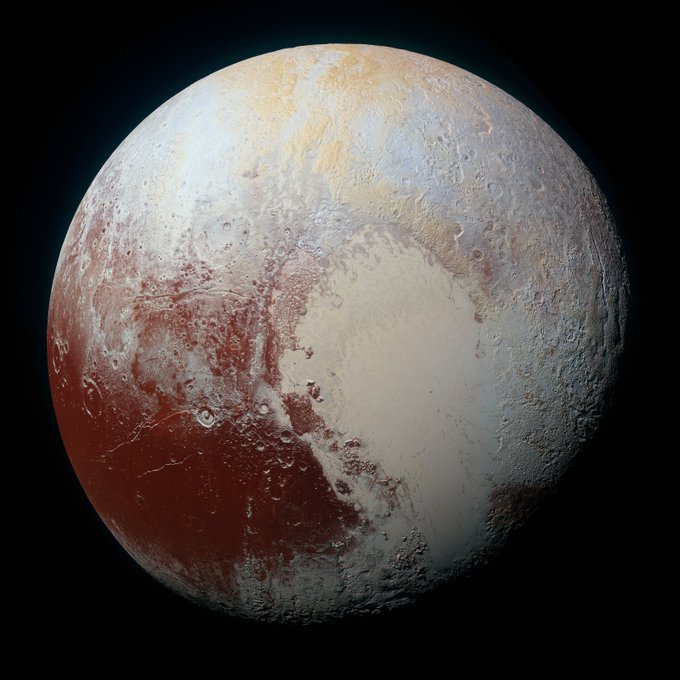 Pluto was once considered the ninth planet in the solar system; however, it was demoted in 2006 and reclassified as a dwarf planet. Photo courtesy: NASA

NASA explained Pluto's surface as cracked and cratered, coloured white, tan, and brownish-red. While the white and tan descend at the top of the photo to meet the brown-red surface, the partially visible "heart" can be seen in white.

The space agency shared the image of Pluto and captioned it as, "Small planetary body Saturday? Taken by our New Horizons spacecraft at a distance of 22,025 miles (35,445 km), this image shows Pluto's true colors, including the "heart" of the dwarf planet - a Texas-and-Oklahoma-sized glacier made of nitrogen and methane.''

Orbiting at a distance of 3.7 billion miles (5.9 billion km), New Horizons is the first spacecraft to visit Pluto and is expected to explore the Kuiper Belt - a region that is believed to be full of small objects left over from the creation of our solar system, NASA said.

Pluto was once considered the ninth planet in the solar system; however, it was demoted in 2006 and reclassified as a dwarf planet. The International Astronomical Union (IAU) downgraded the status of Pluto to that of a dwarf planet because it did not meet the three criteria the IAU uses to define a full-sized planet.  A "dwarf planet," as defined by the IAU, is a celestial body in direct orbit of the Sun that is massive enough that its shape is controlled by gravitational forces rather than mechanical forces but has not cleared its neighboring region of other objects.