When the final shot of the movie comes into focus and zooms out to cover the big screen, the declaration at the beginning of the film - that it is based on true events heartbreakingly swims into the mind. Kudos to the cinematographer N. K. Ekambaram.

Ka Pae Ranasingam was released on 2 October 2020 on Zee Plex a new pay per view platform and also released in cinemas as well as a few drive-in theatres with the lead actors tweeting about it.

If you have any doubts on how to watch our movie #KaPaeRanasingam, please tweet your doubt with hashtag #HowToWatchRanasingam 📱@ZeeplexOfficial & WE will try & answer your questions asap.
Thank you for encouraging & supporting us in this new attempt!https://t.co/UKuy1teUvU pic.twitter.com/aYnZjDUJn6

Ka/Pae Ranasingam FIRST SHOW begins at 12 noon tomorrow 🕛 Bookings open on all DTH platforms 🎥📺 There will be one show every three hours. You can book & watch during your convenient time! https://t.co/4VQMPrRjnj

ZEE5 bookings will open at 10 AM tomorrow! Book your tickets pic.twitter.com/J0sFEZfb0e

This female-centric movie is totally owned by the brilliant Aishwarya Rajesh as was intended when it began production on a shoestring budget.

If it was casting Vijay Sethupathi that increased not only the scale but also the length of the film, I do hope that it pays returns in more people watching it due to the actors huge fan following.

Ka Pae Ranasingam is short form for Kanavan Peyar Ranasingam or husband’s name Ranasingam - which is often the identity of a woman. It is therefore another charming point that Vijay Sethupathi’s Ranasingam makes by tattooing his Manayvee Peyar or wife’s name on his hand. 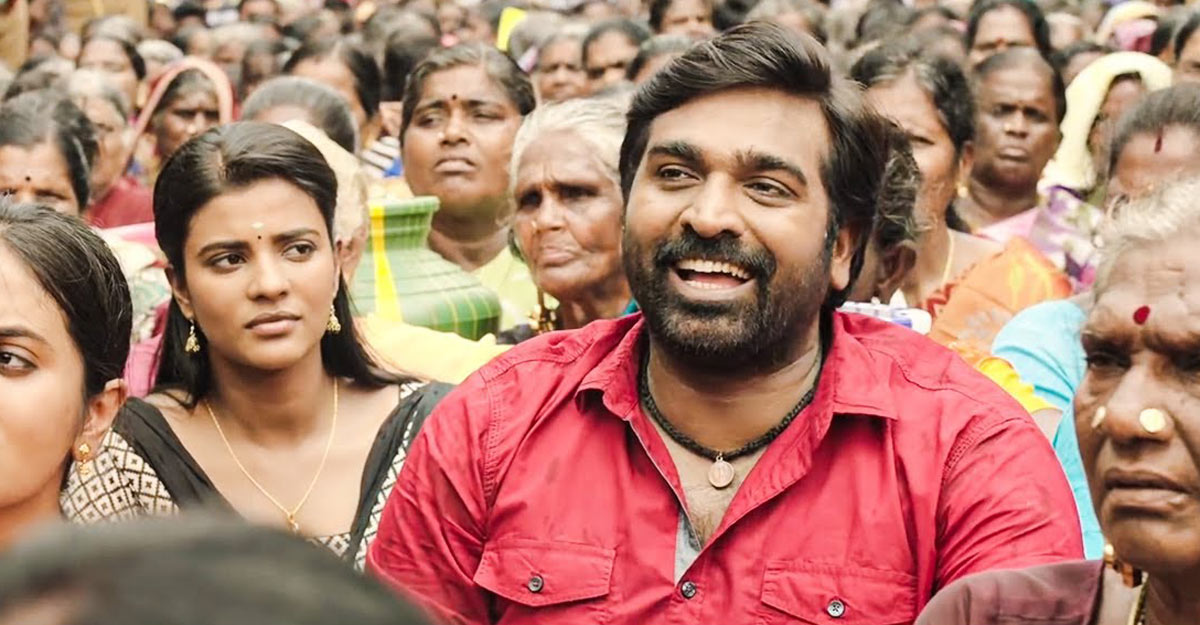 He makes the first point when he literally goes down on his knees to allow Aishwarya Rajesh’s Ariyanachi to garland him at their wedding. This in reaction to a relative who advises him never to bend his head before his wife in deference to her.

The well-read, strong-willed and broad-minded Ranasingam is a ground-water detector, leader, activist and do-gooder who is widely liked by all in his village of Ramanathapuram, which was where the film was shot for around 45 days.

The sharp-witted Ariyanaachi falls for him despite herself, with their light-hearted verbal duels in a delightful Tamil dialect turning into their courtship. 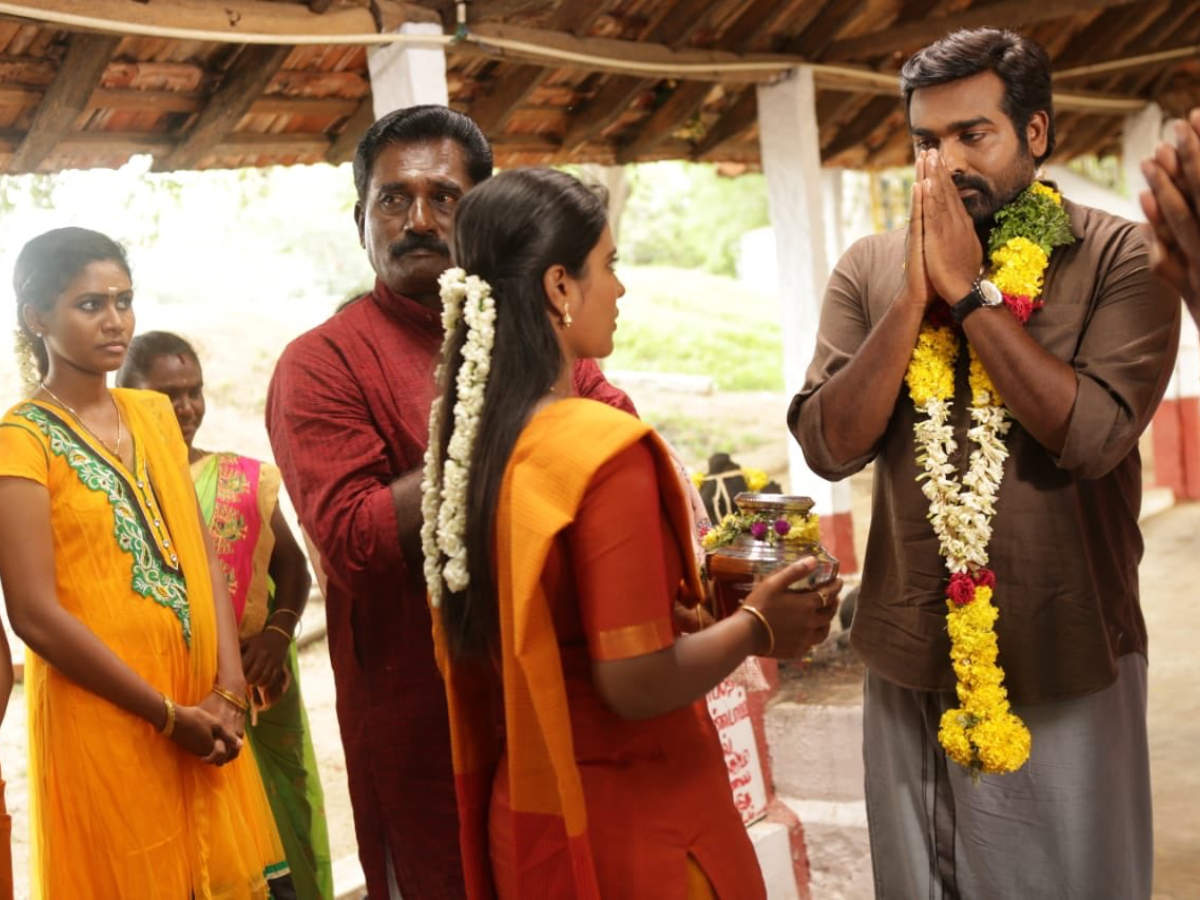 Ranasingam and Ariyanachi marry in a secretive midnight wedding ceremony which takes place minus any pomp, noise or even photographs. Photo Courtesy: Zee Studios

Section 144 is levied on their village, unfairly so, and resistance leader Ranasingam suggests a secret midnight wedding ceremony which takes place minus any pomp, noise or even photographs.

The repercussions of this, the bureaucratic mire that is our system, the haplessness of the poor snared in red-tapism, the legal pathway full of potholes that haven’t been filled in decades and one woman’s lonely fight against this relentless tide is what the rest of the movie is about.

And there is no ray of hope, leave alone answers, anywhere in the farthest horizon.

We’re excited to bring you one of the most anticipated #Tamil film of the year, #KaPaeRanasingam. Releasing in 5 Indian languages & in over 150 countries, the film will be premiering directly in your home!🎥📺🍿@ZeeStudiosInt #PremiumVideoOnDemand #StaySafe #StayEntertained pic.twitter.com/UNwHVmSiIO

“Ration card doesn’t apply outside the state, and no one knows what Aadhaar card is useful for”, an officer states matter of factly. This as well as several other home truths that are brought to the fore - some sharp feminist ones at that - makes me want to laud the dialogue writer.

The film is very long, with seating time inside the theater coming close to three and a half hours in these times when cinemas are just opening post the pandemic. Editor T. Sivanadeeswaran should be pulled up for this.

Some unbelievable fight scenes and even the songs (one of them is quite good) could have been cut to shorten the duration - they actually do no favour to Vijay Sethupathi’s image.

In earlier decades Ka Pae Ranasingam would have been classified as an art film due to the raw, believable and almost real-time slowness in scenes.

The success of a movie is based on people's approach towards it. Have a great start to your weekend by watching #KaPaeRanasingam and celebrate the success!

Supporting actors, an amenable baby who is toted by all and sundry on a journey from Ramanathapuram to Chennai to Delhi and even a Prime Minister Modi look-alike are well cast.

There are some incongruencies, especially the one showing the Sardar Sarovar dam of Gujarat in Delhi, but those can be forgiven.

What could have been just a statistic or a report in a remote corner of a local newspaper has been made personal and brought home to the viewer through this movie.

Imagining 28,000 such stories is gut-wrenching. Statistics quoted that every four years close to 28,000 families become bereft, due to industrial accidents in the Middle East alone. How many of them get closure is a question left unanswered.