'Raj tilak ki karo taiyyari, aa gaye bhagwadhaari' (Begin the preparations for anointing of the leader as the saffron-clad leader returns to power) echoed on the streets of Varanasi as Bharatiya Janta Party (BJP) supporters beat drums and danced to celebrate the victory of Prime Minister Narendra Modi from this constituency and for leading the political party to a consecutive victory in the Lok Sabha election. 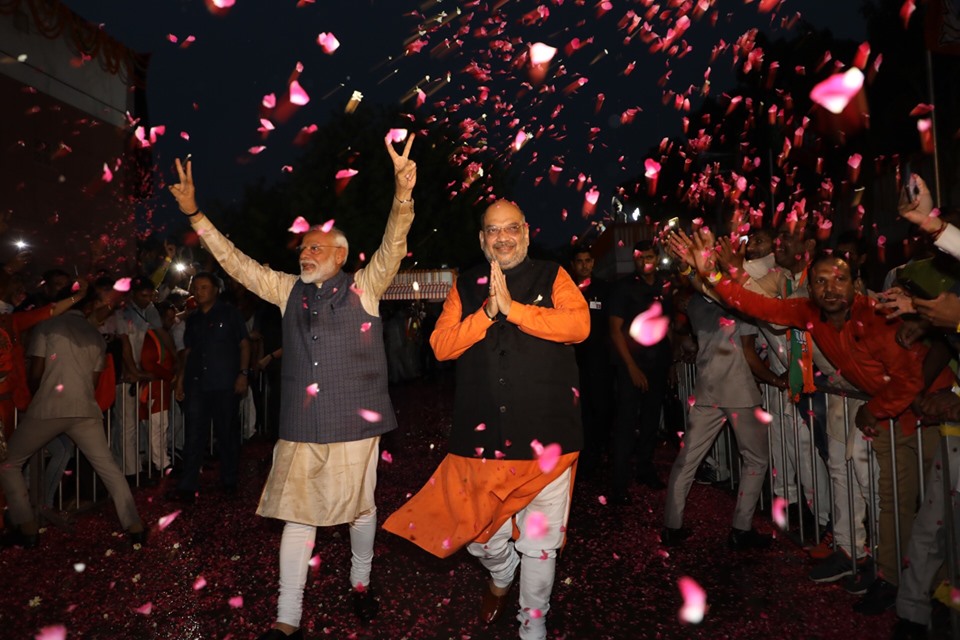 The National Democratic Alliance (NDA) is ahead in 348 of the 542 seats for which elections were held, while the BJP itself is about to cross the 300-mark. The party got 282 seats and the NDA had won 336 in the 2014 elections.

The BJP victory march is continuing in Uttar Pradesh which sends the maximum number of MPs to the Parliament. BJP which won 73 of the State’s 80 seats in 2014 along with ally Apna Dal, is leading in 62 seats decimating the SP-BSP alliance relegating its lead to a mere 17 seats. Congress has been reduced to just one seat as UPA Chairperson Sonia Gandhi retained the Rae Bareli seat while Congress President Rahul Gandhi has been defeated by Smriti Irani from Amethi. 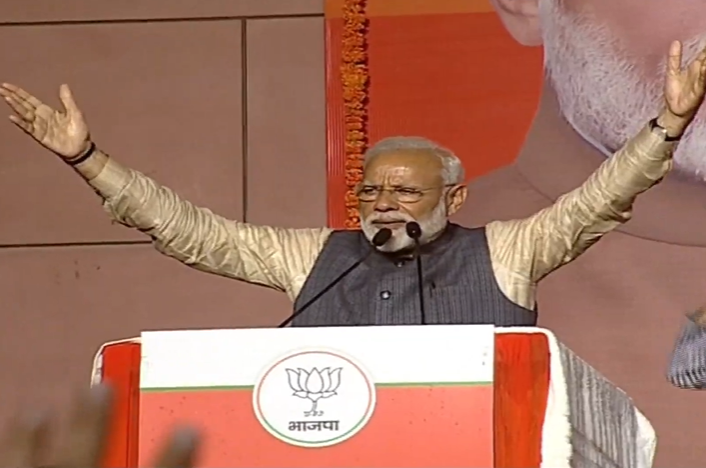 PM Modi promised to build a strong and inclusive nation as his governing alliance headed for a massive victory in Lok Sabha elections on Thursday.

Together we will build a strong and inclusive India.

PM Modi has won the Varanasi seat by an emphatic margin of 480,000 votes. BJP's star candidate, Modi was seeking re-election to his current parliamentary seat, where he trounced dozens of rivals in one of the largest candidate fields in the 2014 election.

Thank you India! Watch from the BJP Headquarters. https://t.co/6WTN8almav

In the fray in Varanasi this year were Shalini Yadav, the candidate of the SP-BSP-RLD opposition alliance, and Congressman Ajay Rai. Modi's win margin last year can be judged from the fact that runner Arvind Kejriwal lost by almost 3.7 lakh votes.

With a margin of over 28,000 votes, Rahul has been trailing in the seat from where he has been chosen as the member of Parliament since 2004. However, in 2014 Smriti Irani gave him a tough contest and gathered over three lakh votes in the Parliamentary constituency

I accept the verdict of the people of India 🇮🇳

Congratulations to the winners, Mr Modi & the NDA.

Thank you to the people of Wayanad for electing me as your MP.

Thank you also to the people of Amethi.

Thank you Congress workers & leaders for your hard work in this campaign.

The tenacity shown by the actor-turned-politician seemed to have worked in her favour. Smriti stayed put in Amethi for several months campaigning and interacting with the locals. On the other hand, Rahul Gandhi due to his national duties spent most of his time touring the country.

However, Rahul Gandhi won the Wayanad seat from Kerala with a mammoth margin of 4,31,195 votes which is a new record in the State.

UPA Chairperson Sonia Gandhi was re-elected from Rae Bareli. She defeated Congress turncoat Dinesh Yadav by a margin of over 1.5 lakh votes. 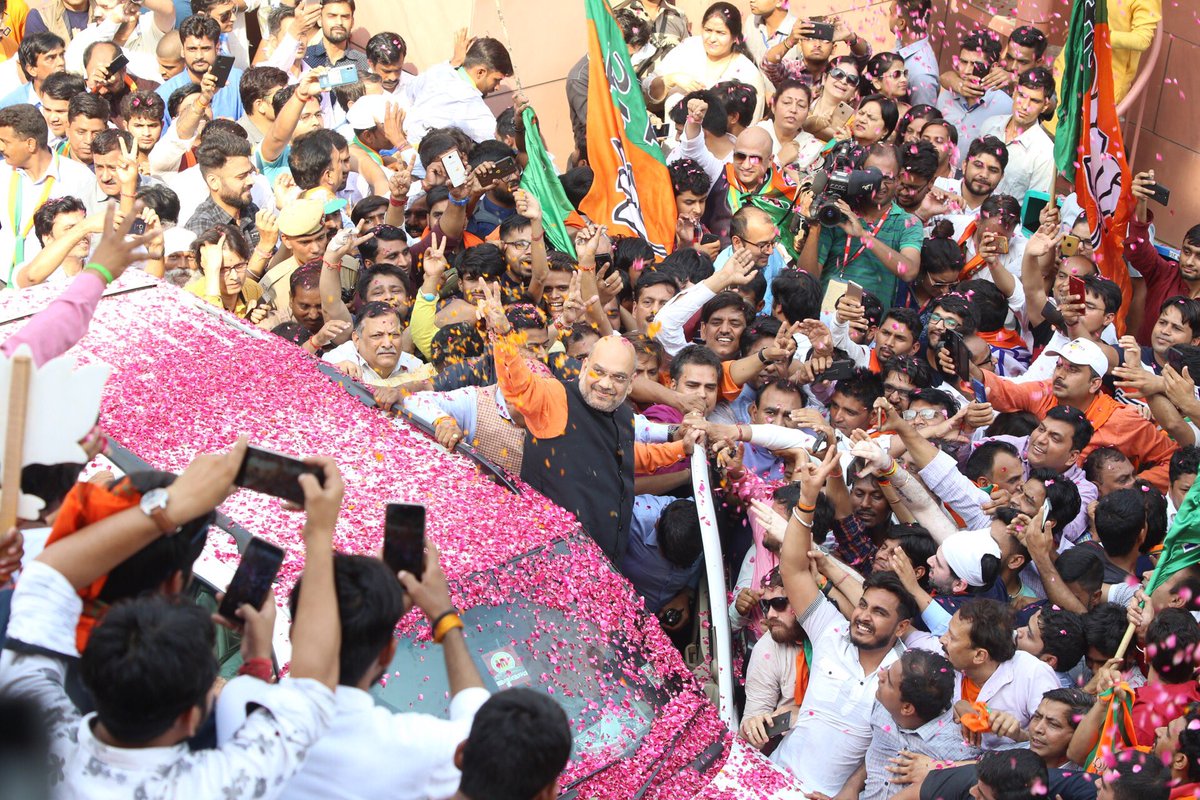 BJP gave a tough lesson to the SP-BSP alliance. The latter hoped to win more than 50 seats, with the backing of the Yadavs and the Muslims, but the outcome is humiliating for them.

For the Congress, which contested most of the state's 80 seats and conducted a high-powered campaign after inducting Priyanka Gandhi Vadra, it is more so.

It was expected that Priyanka Gandhi, who was put in charge of eastern Uttar Pradesh, would rejuvenate the party in the area where Prime Minister Narendra Modi's constituency Varanasi and Gorakhpur, the stronghold of Chief Minister Yogi Adityanath is located.

But the UP result indicated that the Priyanka Gandhi factor has had no effect.

Uttar Pradesh voted in the all seven phases of the Lok Sabha elections - on April 11, April 18, April 23, April 29, May 6, May 12, and May 19. It has 80 seats with main parties being the Congress, the BJP and the grand alliance between Samajwadi Party, Bahujan Samaj Party and Rashtriya Lok Dal.

Voting in Uttar Pradesh was recorded to be around 54 per cent in seven phases. In 2014 Lok Sabha Polls, the voter turnout was 54.5 per cent. In 2014, Lok Sabha Election, BJP had won 71 seats in the state, while ally Apna Dal got two seats. The SP won five seats, while BSP did not win any seat and the Congress won on two seats.