Narendra Modi took oath as the Prime Minister of India earlier today, marking the start of his second term. He was sworn in by Indian President Ram Nath Kovind at the Rashtrapati Bhavan, according to a press release by the PM's office. 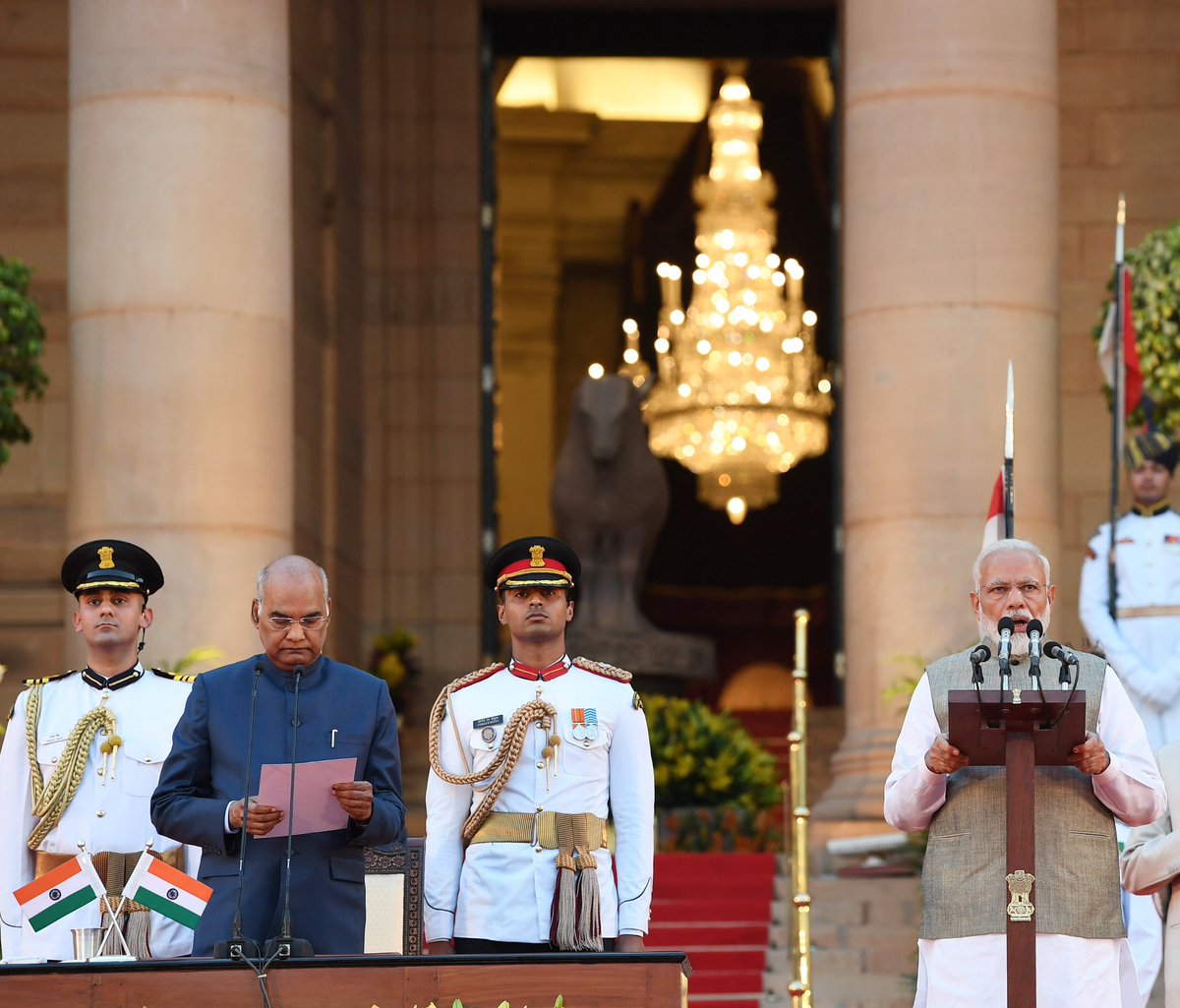 The oath-taking ceremony was attended by over 8,000 guests, including world leaders, captains of industry, Bollywood, media along with a huge number of well-wishers.

Before the ceremony, PM Modi gave his respects to Mahatma Gandhi and former PM Atal Bihari Vajpayee at their memorials. He also paid homage at the Rashtriya Samar Smarak or National War Memorial which honours the Indian armed forces.

"This team is a blend of youthful energy and administrative experience. It has people who have excelled as Parliamentarians and those who have had distinguished professional careers," PM Modi tweeted. He also said the government would continue working towards India's progress.

PM Modi with his new Council of Ministers and President Kovind after the oath-taking ceremony. Photo courtesy: Twitter/@narendramodi

57 ministers in the new NDA government also shared the stage and were sworn in on the occasion. Amit Shah was the most prominent newcomer to the Cabinet and it is believed that he may take over the Finance portfolio after Arun Jaitley had written to PM Modi opting out because of his poor health.

Vijay Chauthaiwale, in-charge of BJP's foreign affairs wing, had said that more than 100 NRIs from across the globe would be attending the ceremony. Earlier, NRIs visited the Bharatiya Janata Party's (BJP) headquarters just hours before the swearing-in ceremony, some of whom had flown in just for the event.

Global Schools Foundation chairman Atul Temurnikar ​was among three guests from Singapore present for the event.

He said that he was honoured to be invited to the event, and wished the prime minister a successful second stint in office.

“Mr Modi has been an advocate of quality learning and stress-free assessment in schools, which is why his vision is a great way forward for institutions like us,” Temurnikar added.

Apart from the leaders of Bay of Bengal Initiative for Multi-Sectoral Technical and Economic Cooperation  (BIMSTEC) countries, including Bangladesh, Myanmar, Sri Lanka, Thailand, Nepal and Bhutan, heads of the states from Kyrgyzstan and Mauritius were present on the occasion as well.

A moment to treasure!

PM @narendramodi with leaders of #BIMSTEC member nations, President of #Kyrgyz Republic & #SCO Chair and Pravasi Bharatiya PM of #Mauritius after being sworn in as Prime Minister. pic.twitter.com/00uXrK1WnK

President of the Kyrgyz Republic, Sooronbay Jeenbekov is welcomed at Delhi. He is attending the oath-taking ceremony of PM @narendramodi in his capacity as the current Chair of the #SCO@IndiaInKyrgyz @MFA_Kyrgyzstan pic.twitter.com/IDyTllBpyo

And that sums up the distinguished foreign leaders guest list!

Prime Minister of Nepal,K P Sharma Oli, joins the BIMSTEC country leaders who have arrived in Delhi to grace the oath-taking ceremony of PM @narendramodi and the Council of Ministers#BIMSTEC@IndiaInNepal @EONIndia pic.twitter.com/MqJ6FEvKGM