Indian Prime Minister Narendra Modi was greeted by cheers and applause in Houston during the ‘Howdy, Modi!’ rally for taking Pakistan to task over sponsoring terrorism in Kashmir and across the world as well as lauding US President Donald Trump as "India's best friend in the White House". 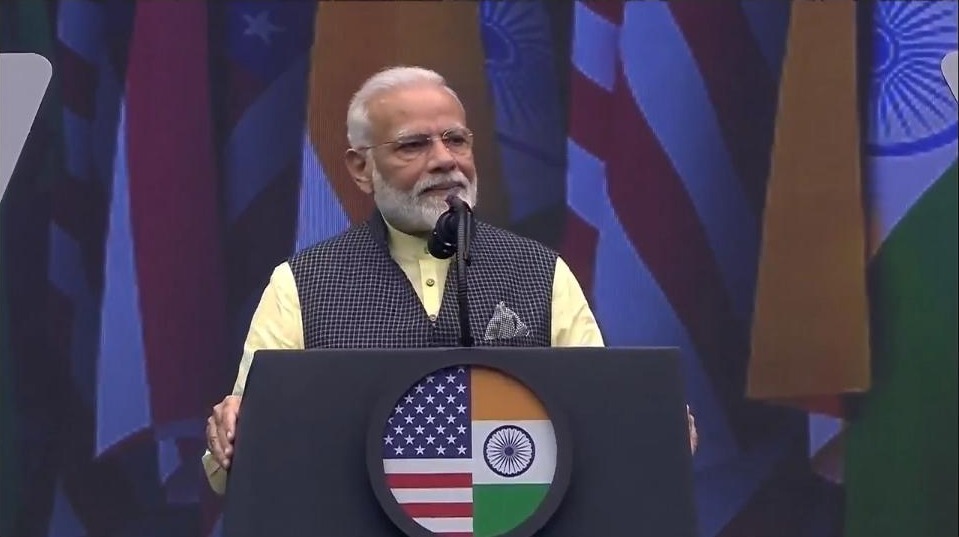 Modi chose to address the crowd in Hindi, smashing the language barrier and getting several standing ovations and raucous cheers from the crowd. Photo courtesy: PMO India

“From Boston to Bengaluru, from Chicago to Shimla and from Los Angeles to Ludhiana, millions are glued to their TV even though it is rather late in India,” Modi said in his address to 50,000 Indian-Americans gathered at the NRG Football Stadium in Houston.

Thank you for the affection Houston. Watch my address! #HowdyModi https://t.co/npT6OavmrS

He highlighted his government's welfare programmes in India during his speech and also talked about India's decision to scrap Article 370, which gave special status to Jammu and Kashmir.

In line with US President Trump’s remarks against radical Islamic extremism, Modi highlighted the recent abrogation of Article 370 of the Indian Constitution, which granted autonomy to the violence-ridden state of Jammu and Kashmir, in his speech.

Stating that Article 370 had kept the people of Jammu and Kashmir and Ladakh away from progress and that terrorists were using it to their advantage, the Indian PM said that now the residents of the state have the same rights as every Indian.

Pakistan, which has opposed India's move in Kashmir, also came under sharp attack by the Indian prime minister. Without naming Pakistan, Modi said that the people who have a problem with the abrogation of Article 370 were the same “people who can’t govern their own country properly. These are the same people who shield terrorism and nurture it. The whole world knows them very well”.

Modi said that India had made massive strides forward in the past five years, adding that the country’s biggest mantra was ‘sabka saath, sabka vikaas’ (Everyone together, everyone progressing).

“We are challenging ourselves, we are changing ourselves. India wants to progress at a faster rate. We are aiming high; we are achieving higher,” he said. 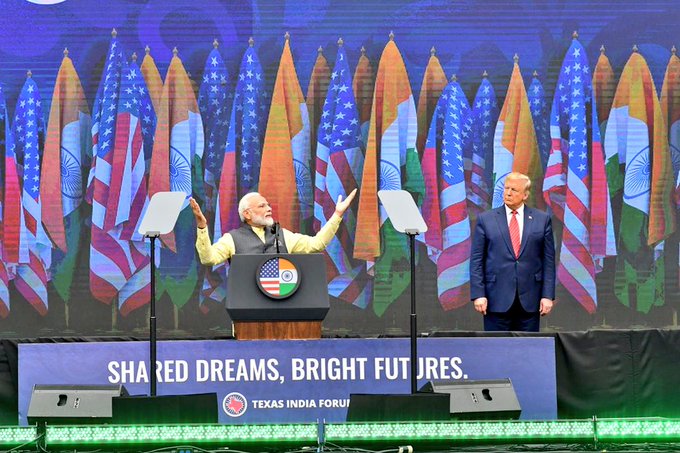 The Indian leader was effusive in his praise of Trump (right) and the latter’s support for the Indian-American community. Photo courtesy: Twitter/@MEAIndia

Modi chose to address the crowd in Hindi, smashing the language barrier and getting several standing ovations and raucous cheers from the crowd.

“My response to the question ‘Howdy, Modi?’ is ‘everything is fine in India’ (Bharat me sab accha hai),” he said, before repeating the line in over 10 of India’s languages, highlighting the nation’s varied and multicultural heritage.

Addressing the gathering as his “family”, Modi said, “Today, 50,000 Indians here are representatives of our great culture. We take along principles of diversity and democracy everywhere we go. Unity in diversity is our heritage, it is our specialty. It is proof of our vibrant democracy, our power and inspiration.”

"Everything is fine!." - @narendramodi pic.twitter.com/Ek07vJQ08B

The summit was held to showcase the contributions of Indian-Americans in enriching US life and culture over the last seven decades as well as the key role they have played in strengthening relations between the two nations.

Modi shared the stage with United States President Donald Trump, Texas Governor Greg Abbott and over 50 lawmakers from both the US Congress and Senate

“The arrival of President Trump and other leaders of America and speaking highly of India is the respect bestowed upon the achievements of Indians living in America and to all 130 billion Indians,” Modi said in his speech.

The rally at the sprawling NRG Football Stadium in Houston was the largest gathering ever for an elected foreign leader visiting the United States, apart from the Pope. It was also the first time a US President attended an Indian-American community event. 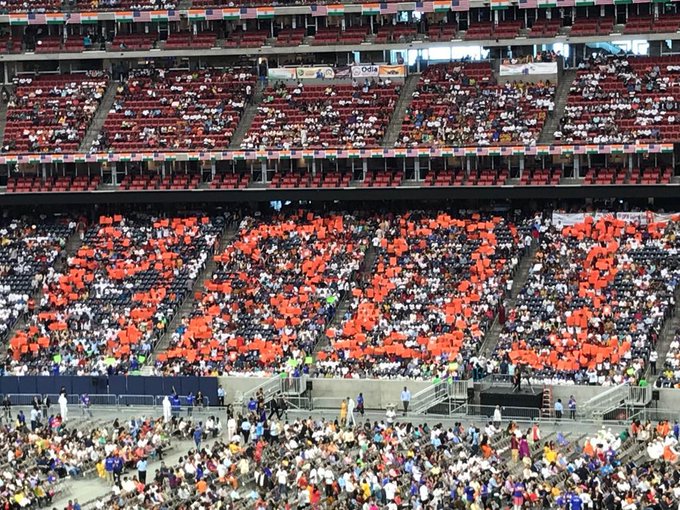 The summit, with an audience of 50,000, was held to showcase the contributions of Indian-Americans in enriching US life and culture over the last seven decades as well as the key role they have played in strengthening relations between the two nations. Photo courtesy: Twitter/overseas_bjp

The time has come for a decisive fight against terrorism and those who support terrorism, Modi added.

The Indian leader was effusive in his praise of Trump and the latter’s support for the Indian-American community.

“Donald Trump's ‘abki baar Trump sarkaar’ slogan rang loud and clear. His celebration of Diwali in the White House lit up millions of faces with joy,” he said, adding, “President Trump calls me a 'tough negotiator'. But he himself is a master of the 'art of the deal' and I am learning a lot from him.” 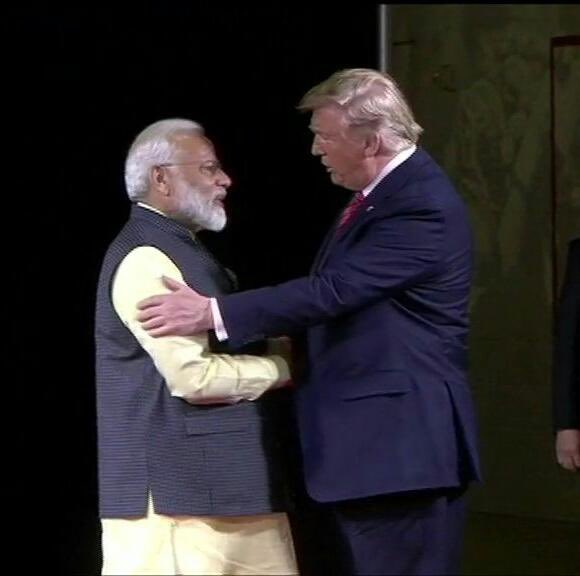 President Trump calls me a 'tough negotiator'. But he himself is a master of the 'art of the deal' and I am learning a lot from him, said Modi. Photo courtesy: Twitter/@sanampatel3

Modi also spoke about the growing economic ties between India and the US and how they had multiplied in recent years and pointed out that many new opportunities were opening up as India began its push to achieve its target of a USD 5 trillion economy.

“You can hear the heartbeat of the great partnership between India and the US in this celebration of the world's two largest democracies. You can feel the strength and depth of the bonds between our two nations,” Modi said.

Earlier, the Indian PM shook hands with over 20 US Congressional Representatives on stage and was greeted by chants of ‘Modi, Modi’ and ‘Bharat Mata ki Jai’ by the crowd.

His address was followed by a luncheon meeting, a community reception and the inauguration of the Eternal Gandhi Museum, Gujarati Samaj of Houston Event Centre and Shri Siddhi Vinayak Temple before he left for New York.