India’s own engagement in the Indo-Pacific region, from Africa to the shore of the Americas, will be inclusive and it stands for an open and stable international trade regime, stated Indian Prime Minister Narendra Modi while kicking off one of Asia’s most prominent international dialogue summits. 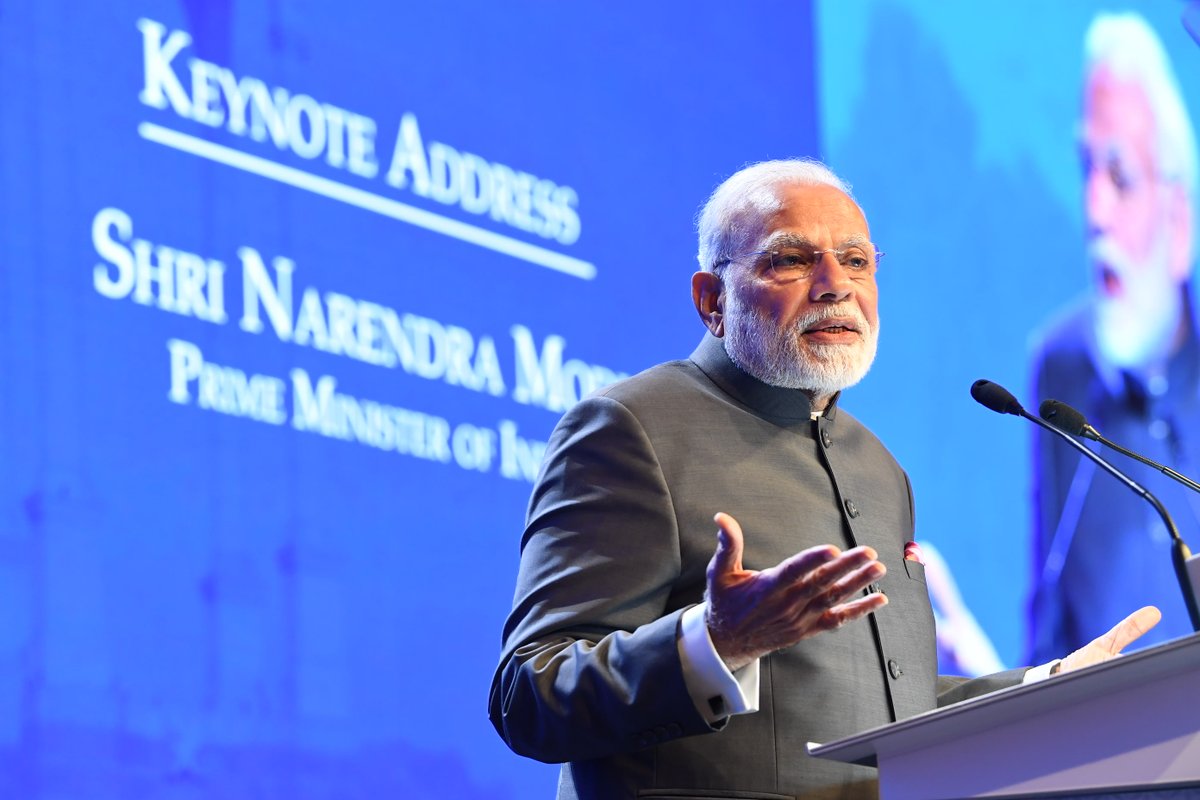 “This world is at a crossroad; there are temptations of the worst lessons of history, but there is also a path of wisdom. It summons us to a higher purpose. It rises above a narrow view of our interests and recognises that each of us can serve our purpose better when we work together as equals,” Modi said.

PM Modi delivered the opening address for the 17th International Institute for Strategic Studies (IISS) Shangri-La Dialogue, the Asia-Pacific’s leading defence and security summit on the second day of his visit to Singapore. He will unveil a plaque commemorating the scattering of Mahatma Gandhi's ashes at Clifford Pier tomorrow on the last day of his three-nation tour of South East Asia.

India’s Prime Minister stated that he was “deeply honoured” to deliver the keynote address, which marked the start of three days of high-level discussions between defence ministers and other top-ranking officials from 40 countries involving up to 600 delegates. Prime Minister Modi also noted that the summit would be “an opportunity to highlight India’s view on various regional issues”.

“India stands for a free, open, inclusive Indo-Pacific region, which embraces us all in a common pursuit of progress and prosperity. It includes all nations in this geography as also others beyond who have a stake in it,” said PM Modi.

He focused on global issues such as maritime security and cooperation, economic ties with nations and regions, connectivity in South East Asia, trade policies and agreements, stating that India’s stance was to pursue options that led to all-inclusive growth, pluralism, unity, openness, co-existence and democracy. 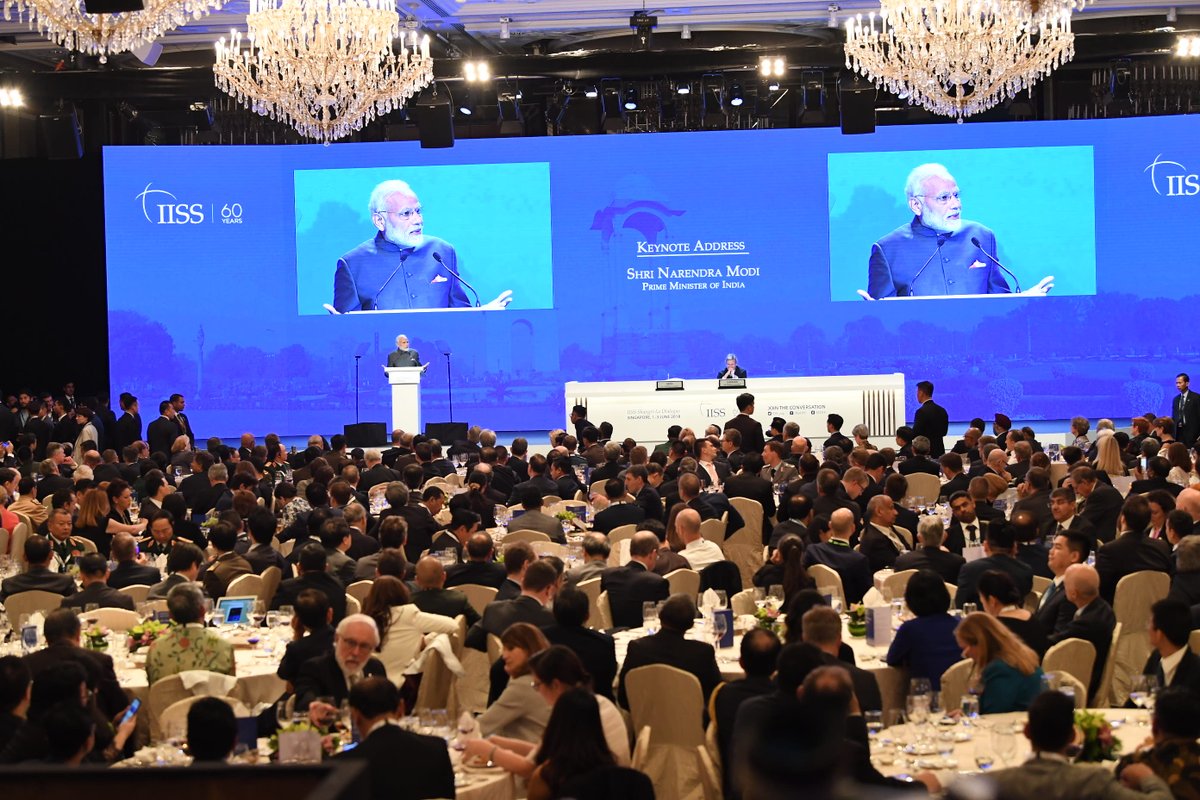 Modi reiterated the need for multinational cooperation rather than competition. Photo courtesy: PIB

“The ideals of our nation also show the way we engage the world, which translates into samman (respect), samvaad (dialogue), sayyog (cooperation), shanti (peace) and samruddhi (prosperity),” PM Modi said.
Modi opened his speech by focusing on the East, highlighting the Act East Policy that he implemented on becoming PM. He emphasised the importance of ASEAN in particular as an example of multilateral cooperation across cultural diversity.

“I see ASEAN as an example and inspiration,” he said. “ASEAN represents the greatest level of diversity of culture, religion, language, governance and prosperity of any grouping in the world. “It was born when the region was the frontline of global competition.”

He reiterated the need for multinational cooperation rather than competition, stating that there were many destabilising factors, especially in the “Indo-Pacific, where regions are starving for stability”.

“Asia of rivalry will hold us all back; Asia of cooperation will shape this century. We have seen the limits of power and the fruits of cooperation,” the PM said. “Three years ago, in Mauritius, I described our vision in one word – SAGAR, which means ocean in Hindi. And, S.A.G.A.R. stands for Security and Growth for All in the Region.”

He was particular in praising hosts Singapore, saying that the island nation “shows us that when the oceans are open, the seas are secure, countries are connected, the rule of law prevails and the region is stable, nations small and large prosper as sovereign countries”. He said that Singapore has a special place in India’s heart.

“Singapore is our springboard to the ASEAN. It has been, for centuries, a gateway for India to the broader East,” he added. He also stated that Singapore also showed that when nations stand on the side of principles, they earn the respect of the world and a voice in international affairs.

Modi also talked about India’s ties with other nations and organisations across the globe, with special emphasis to economic and strategic cooperation with Japan, the US, Africa, Australia and New Zealand, and mentioned his close cooperative relationships with the heads of state of Russia and China. 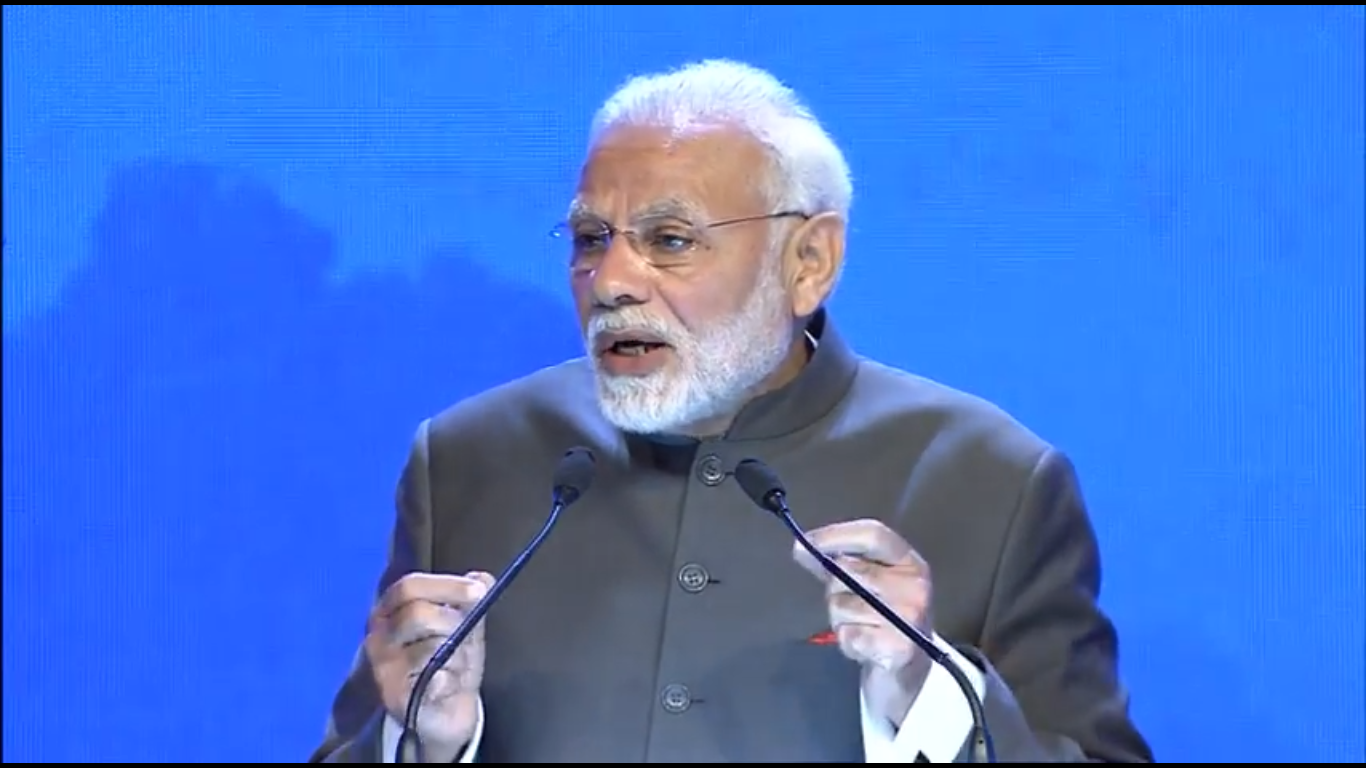 The Indian PM stated that Singapore has shown that when nations stand on the side of principles, they earn the respect of the world and a voice in international affairs. Photo courtesy: IISS

“No other relationship of India has as many layers as with China,” he stated. “We are both among the fastest-growing major economies. I strongly believe that Asia and the world will have a better future when India and China work together in trust and confidence, sensitive to each other’s interests.”

He also touched upon the issues of maritime security and cooperation and the global threats of terrorism and extremism faced by all countries, stating that “for all our progress, we live on the edge of uncertainty” and amidst “new faultlines in trade across the global common”.

“In the midst of this, there are challenges that touch us all, including the unending threats of terrorism and extremism. This is the world of interdependent fortunes and failures; no nation can shape and secure itself on its own,” he said. “We will work with others to keep our seas, space and airways free and open; our nations secure from terrorism and our cyberspace free from disruption and conflict.”

“India believes in the oneness of all, and celebrates unity in diversity. The foundation of our civilisation’s ethos is of pluralism, coexistence, openness and dialogue,” he concluded. “We will engage with the world in peace with respect through dialogue and absolute commitment to international law.”

The IISS Shangri-La Dialogue in Singapore is an annual gathering of defence professionals in the Asia-Pacific region. Since its launch in 2002, the Dialogue has fostered practical security cooperation, by facilitating easy communication and fruitful contact among the region’s most important defence and security policymakers. 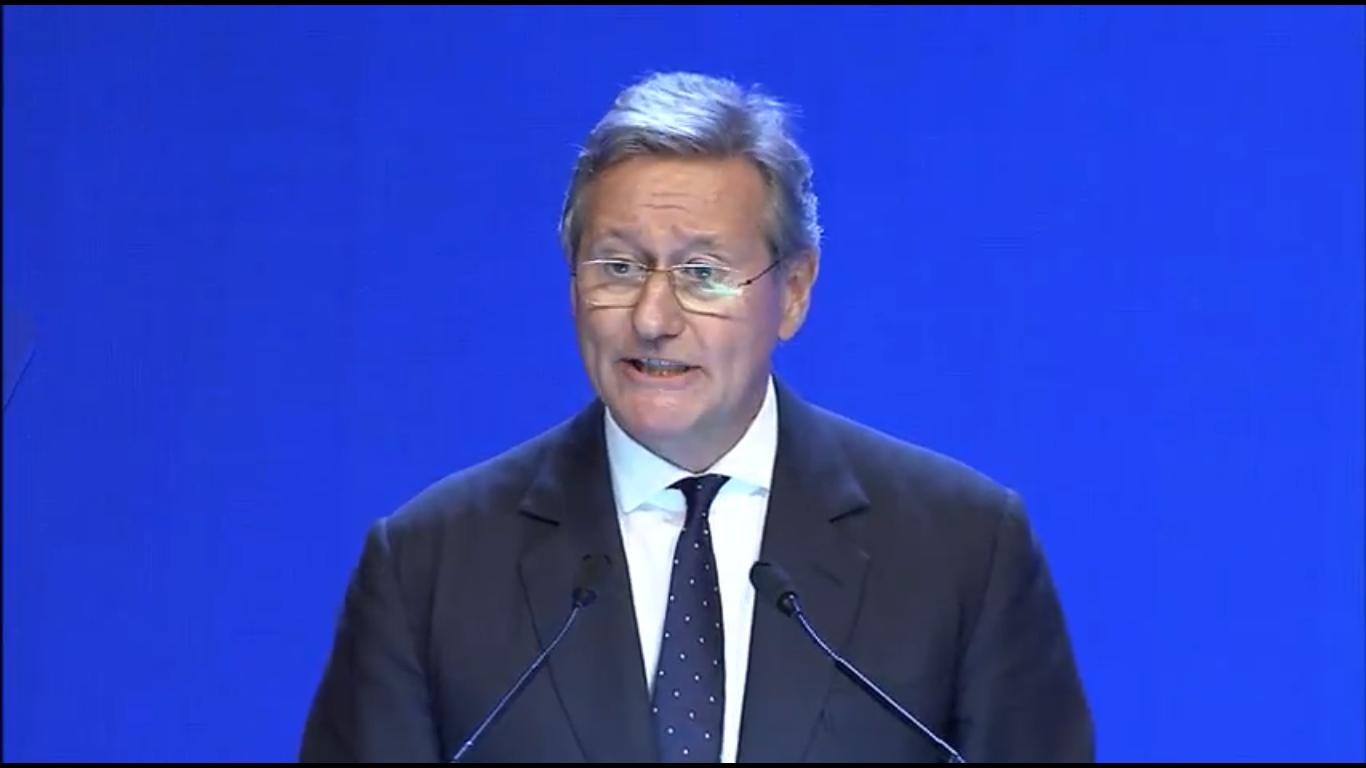 John Chipman, IISS Director-General and Chief Executive, stated that around 600 delegates from 40 countries were attending the summit. Photo courtesy: IISS

The summit comes as security in the region continues to be in the world’s spotlight, with renewed planning for a possible Kim–Trump summit and continued tensions over maritime security issues coupled to rising concerns around the humanitarian situation in some regional countries.

John Chipman, IISS Director-General and Chief Executive, commented, “Defence diplomacy is hard work and the next three days will see an intense series of bilateral, minilateral and more wide-ranging inter-governmental meetings at the IISS Shangri-La Dialogue as well as important public statements that together have the potential to shape defence and security policy in the region.”

Some of the key issues that will feature in this chapter of the dialogue are North Korea, ahead of the 'almost confirmed' meeting between Kim Jong Un and Donald Trump in Singapore, besides Chinese influence in the South China Sea, its One Belt One Road (OBOR) initiative and the increasing importance attached to the region by the United States.