The Bharatiya Janata Party (BJP) has swept the 2022 Gujarat assembly election; winning 139 seats and leading in 17 more constituencies, and is looking set to break its own record of 149 seats in 1985 assembly polls.

The Indian National Congress, meanwhile, has been able to wrest back Himachal Pradesh following a close contest with the BJP, which was hoping to buck the trend in the hill state, as consolation.

Indian Prime Minister Narendra Modi thanked his home state Gujarat and said he is “overcome with a lot of emotions seeing the phenomenal election results". 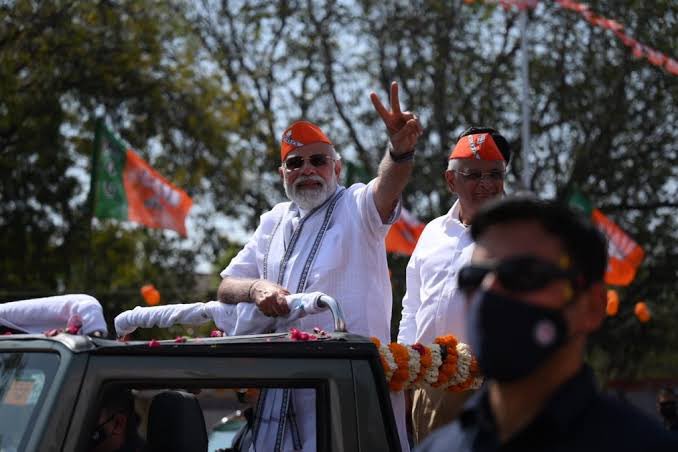 Speaking at the party headquarters in Delhi, PM Modi - whose personal popularity is seen as the largest contributing factor for the victory - made light of his role. Photo courtesy: Twitter/@satyakumar_y

Reacting to the loss in Himachal Pradesh, he thanked voters of the hill state for their affection and support to the BJP.

“I thank the people of Himachal Pradesh for the affection and support for the BJP. We will keep working to fulfil the aspirations of the state and raise people’s issues in the times to come. @BJP4Himachal,” the PM added.

As per the latest trends from Gujarat, Congress may get restricted to 17 seats, less than one-tenth of the assembly strength.

The Aam Aadmi Party (AAP) ran an aggressive campaign to make inroads in Prime Minister Narendra Modi's home state but failed to make a significant impact in terms of seat share. Arvind Kejriwal's party, however, has received nearly 13% of the total votes polled and is well on its way to qualify as a national party.

Expert predictions that the AAP would split the Congress' traditional voter base in the western Indian state seem to have come true.

Bhupendra Patel will be sworn in for a second term as Chief Minister of Gujarat on December 12, the party announced today. The oath-taking ceremony will take place at 2 pm in the presence of Prime Minister Narendra Modi and Union Home Minister Amit Shah, state BJP president C R Paatil said at a press conference in the presence of the Gujarat CM at the BJP office in Gandhinagar.

Meanwhile, Himachal Pradesh Chief Minister Jai Ram Thakur accepted defeat in the hill state even as votes were being counted. The Congress was leading in a majority of 68 seats, according to Election Commission data.

In terms of vote share in Himachal, Congress is only marginally ahead of the BJP having 43.90 per cent of votes compared to 42.99 per cent of its arch-rival. Others have garnered a 10.4 per cent vote share in the hill state.

BJP's attempt to head off anti-incumbency by dropping 11 of its 44 MLAs backfired and led to a full-scale rebellion. Many of the rebels could not be pacified and it is believed that they cost the party 10-odd seats.