The Indian Ministry of External Affairs has asked its missions in 14 countries to locate families of their nationals who were killed in 26/11 terror attack to hold a memorial for them and spread awareness about the global threat of terrorism.

In a statement issued on the 10th anniversary of the horrifying terror attack in Mumbai, the MEA these solemn events will have full participation from Government side as well as the families of victims and survivors in these countries. 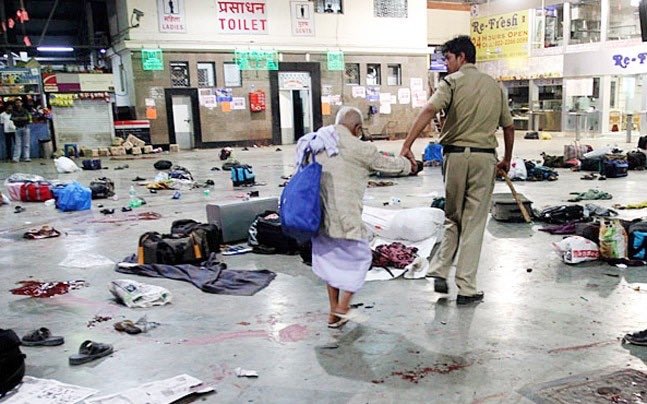 A policeman helping an old man across a platform at Mumbai railway station just after the terror attack on November 26, 2008. Photo courtesy: Daniel Carmon, Twitter

"Fourteen other countries lost their nationals in these attacks. The Indian missions in these countries are organising memorial events remembering the victims, both national and foreign, reminding the world of the global threat of terrorism," the ministry said.

"Senior government representatives from the host Governments, family members of victims and survivors will be participating in these solemn events," it added.

Singapore’s statement on the 10th anniversary of Mumbai terror attack: together in remembering the loss of lives and resolute in fighting terrorism https://t.co/ScWPBVgQQE pic.twitter.com/Z0crx4KXYc

Describing the tragedy as "a matter of deep anguish," the ministry said that even after 10 years of this heinous terror attack, the families of 166 victims from 15 countries across the globe still await closure, with Pakistan showing little sincerity in bringing perpetrators to justice.

"The planners of 26/11 still roam the streets of Pakistan with impunity," it said. 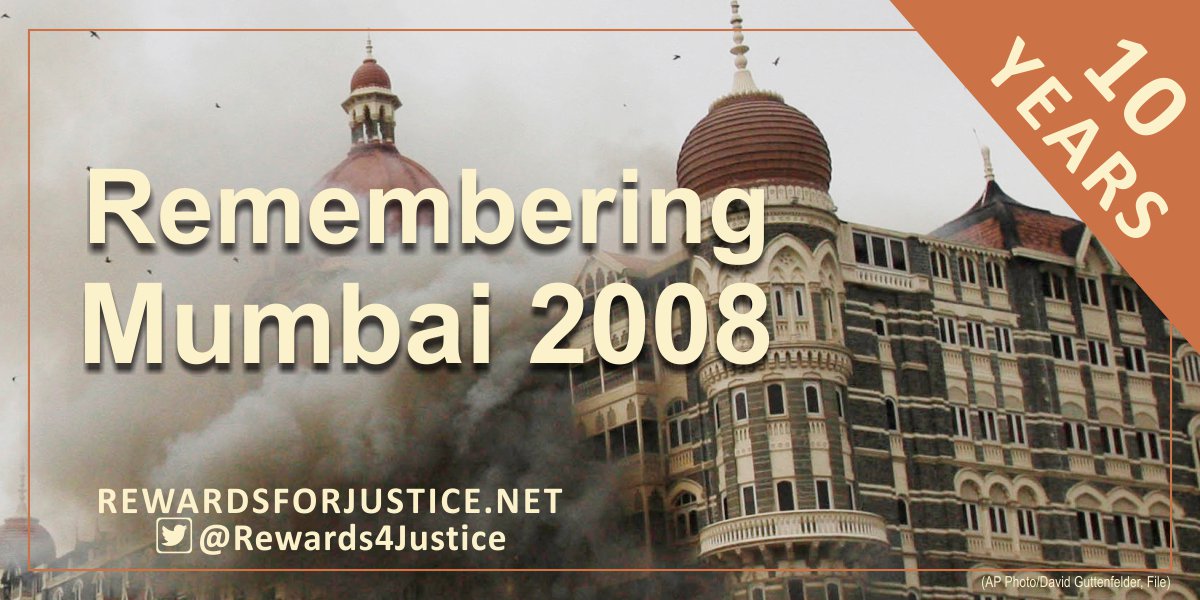 Reward of up to USD5 million for information leading to the arrest or conviction in any country of any individual involved in planning or facilitating the November 2008 Mumbai attack. Photo courtesy: Reward for Justice

"The 26/11 terrorist attack was planned, executed and launched from Pakistan territory. The former Prime Minister of Pakistan had earlier this year admitted that the terrorists were sent from Pakistan’s soil," it said.

HCI joined by distinguished members of Indian and diplomatic community to remember the victims of #MumbaiTerrorAttack and to show solidarity in fight against the scourge of violence. Candles were lit and silence observed for two minutes.@MEAIndia @RuchiGhanashyam @VirendraSharma pic.twitter.com/s92NfUROX0

A solemn event was held at the Consulate to pay homage to Indian, American & Israeli victims of the barbaric Mumbai terror attacks. Speakers condemned the impunity available to the masterminds in Pakistan & called for justice. Thanks to @AmbDaniDayan & @SethMSiegel for joining us pic.twitter.com/SJacoLzYzG

"We once again call on the government of Pakistan to give up double standards and to expeditiously bring the perpetrators of the horrific attack to justice. This is not just a matter of Pakistan’s accountability to the families of the innocent victims who fell to terrorists, but also an international obligation," the MEA reminded Pakistan.

Earlier, the Government organised several events to remember the victims of "this dastardly attack and the martyred security personnel who laid down their lives to protect ours." 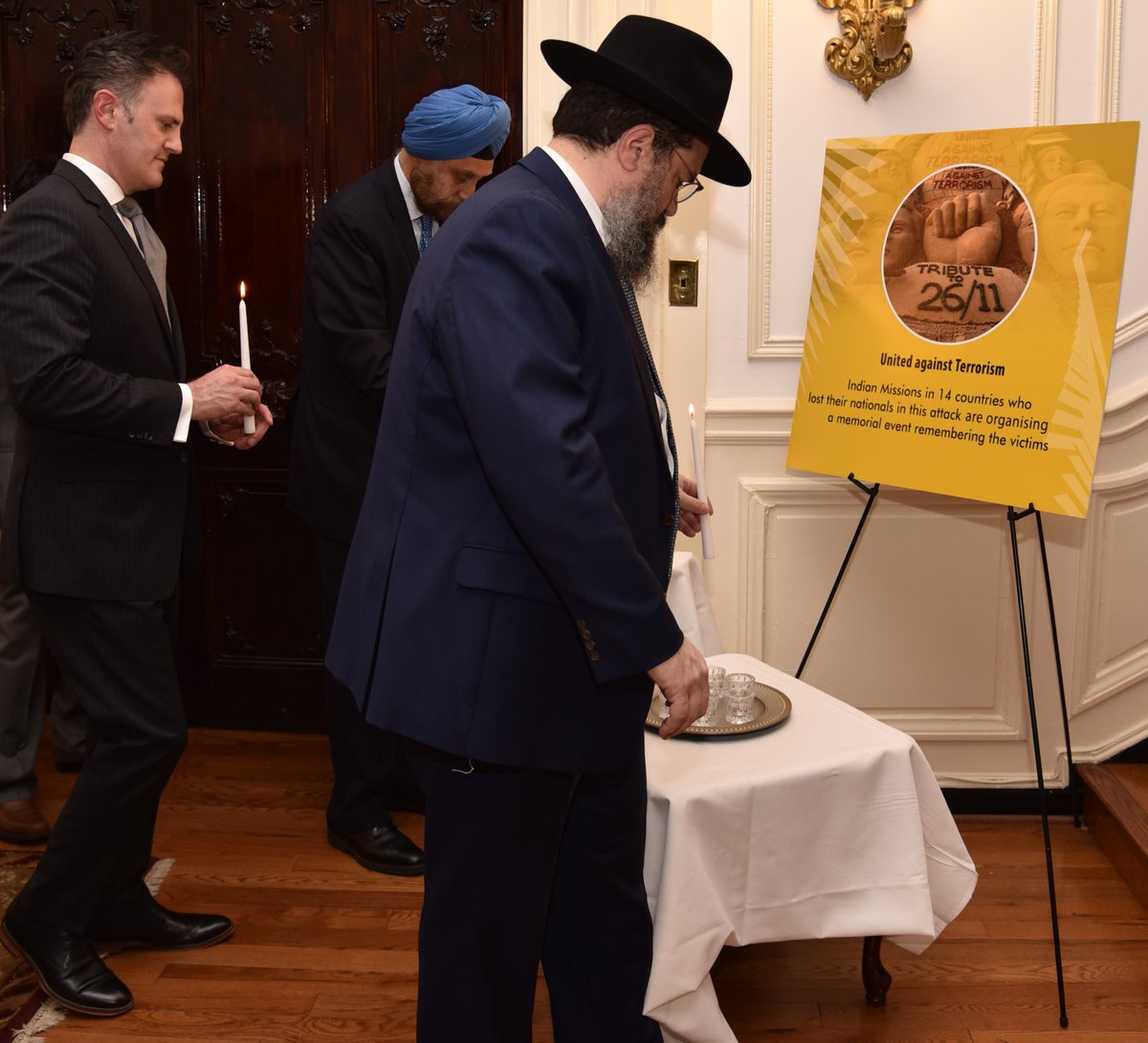 The President, the Prime Minister and the External Affairs Minister, in separate messages, expressed their firm solidarity with the families of the victims and martyrs. A solemn memorial event and wreath laying ceremony was organised by the state government of Maharashtra at the Police Memorial in Mumbai and the Memorial at Taj Hotel, Mumbai. The Chief Minister of Maharashtra along with other state dignitaries and members of the diplomatic corps participated in these events.

A decade on, a nation mourns and the world awaits justice
#2611Attack #MumbaiTerrorAttacks pic.twitter.com/Tccf3f59Kr

The MEA welcomed the statement issued today by the United States calling on Pakistan to uphold their UN Security Council obligations to implement sanctions against the terrorists responsible for the 26/11 Mumbai terror attacks, including Lashkar-e-Tayyiba and its affiliates.

Marking the 10th anniversary of the Mumbai Terror Attack with a representative of the Israeli Govt and a family member of one of the Israeli victims #MumbaiTerrorAttacks pic.twitter.com/hpAyglXsNh

Such a pleasure to visit Haji Ali Dargah today. A #Mumbai landmark that is a reminder of the city’s rich history and diversity. pic.twitter.com/bABL0KzOZp

New Delhi vowed to "continue its efforts to bring justice to the families of the victims and the martyrs."

We should not forget the barbaric attack on Mumbai and #India ten years ago by Lashkar-e-Taiba. @dhume right to insist that Pakistan convict the terrorists who killed so many innocent people. https://t.co/BWOUqmCqI6