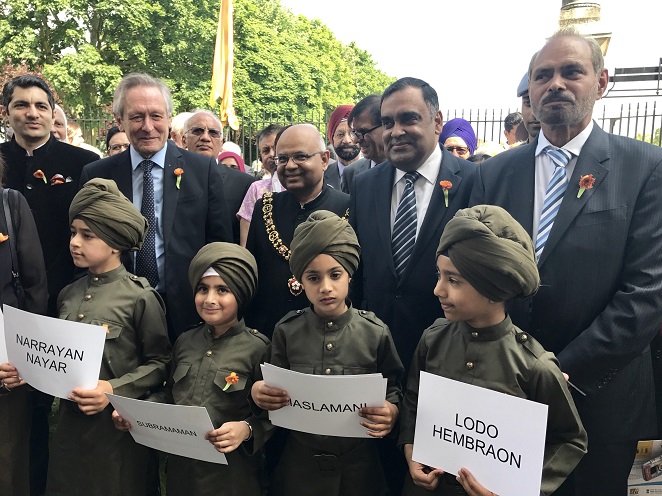 Children dressed as Labour Corps holding up names of those who served the British during World War I. High Commissioner Y K Sinha (2nd from Right) looks on. Photo courtesy: MEA

A touching tribute was paid to the forgotten Indian 'coolies' of The Great War at The Arch of Remembrance, Victoria Park, Leicester, in an event organised to mark the centenary of the Labour Corps this year by the Indian High Commission in UK.

Titled 'The Unremembered: The Indian Story', the commemoration was presided over by the High Commissioner of India to UK Y K Sinha who brought a special focus to the courage and contribution of the Indian Labour Corps who stood by the side of British Army during World War I.

This was a special focus on the Indian contribution to 'The Unremembered: World War One’s Army of Workers', a community engagement project funded by the Department for Communities and Local Government supporting communities in the UK to discover the history of the Labour Corps in World War I.

Thousands of workers supported the war effort from around the world. Many faced racism and discrimination. They served with courage but they have been almost completely forgotten.

The Unremembered project that involves a database of over 5,700 Labour Corps war graves in the UK serves as a map for the participants’ remembrance activity. Archive readings, music and history resources are offered as the building blocks for community commemoration.

The High Commission has also funded the production of a new resource pack, 'The Unremembered: The Indian Story' focusing exclusively on the story of India’s army of workers. The pack has been created with support from the India Remembers team at the Centre for Armed Forces Historical Research (CAFHR) of United Service Institution (USI) of India.

The Indian Labour Corps served in France and Flanders, on the North West Frontier, in Salonika, East Africa, Persia, Egypt and Mesopotamia – more than 11,000 are listed in the Basra archive, for example.

In the event held in Leicester last Friday, 1,174 Labour Corps men were remembered whose names are written in the heart of New Delhi on the India Gate monument.

The architect of India Gate – India’s memorial to 13,281 dead in World War I – was designed by Edwin Lutyens. It is little known beyond Leicester that Lutyens built an almost identical monument as a local war memorial in tribute to 12,000 Leicestershire men who died in World War I using an almost identical design. The memorial, which is called the Arch of Remembrance, is in Leicester’s Victoria Park and will be used to evoke the men commemorated on India Gate. 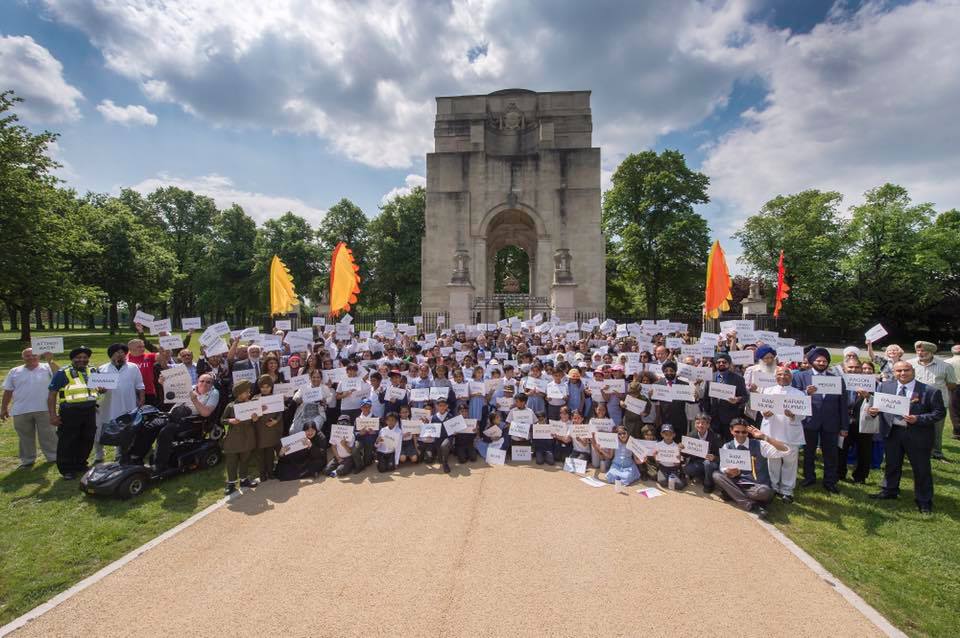 Children holding up names of Indian labourers who served with Britain during World War I at The Arch of Remembrance, Leicester. The Arch is the sister monument to the India Gate in Delhi. Both were designed by Edwin Lutyens. Photo courtesy: Facebook/indianhighcommissionuk 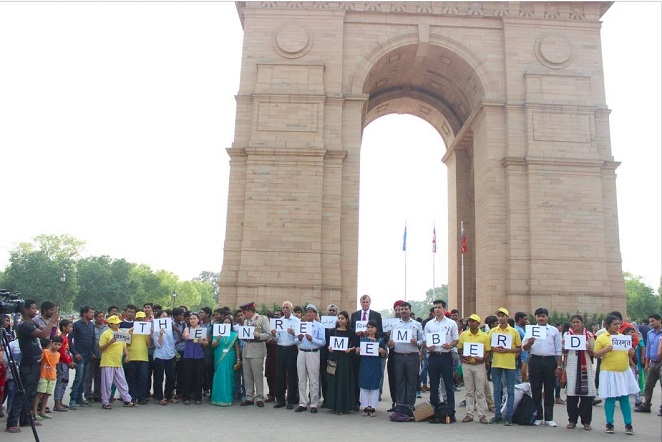 A mirror event in memory of Indian Labour Corps was held at the same time at India Gate in New Delhi. Photo courtesy: MEA

Following the commemoration, schools and community groups in Leicester will take part in a series of creative and learning activities including creative writing, planting marigolds and visits to the 18 British war graves at Welford Road Cemetery. Welford Road Cemetery served a World War One field hospital.

Sinha spoke of the need to remember the contributions of Indians in the labour corps that worked behind the scenes during World War I, and offered a wreath of marigolds at the Arch of Remembrance.

Hundreds of children were present to respect the names of the 1,174 Indians from the labour corps, whose names also find mention on the India Gate in New Delhi. All attending, left messages of commemoration on the railings tied with marigold ribbons around the Arch of Remembrance and tied with marigold ribbons. High Commissioner thanked the children for joining in this historic event and presented them with 'Unremembered' certificates.

USI of India held a mirror event at the same time at India Gate in New Delhi, linking the sister memorials for the first time.  During the ceremony, Defence Advisor Brig. Rajesh Jha connected with the commemorative ceremony at the India Gate during which an exhortation was followed by the Last Post being played on Sarangi in Leicester. An identical marigold wreath was laid at India Gate by the British High Commissioner to India, Sir Dominic Asquith.

Initially called the Coolie Corps, the non-combatants raised by the British for the Great War later came to be known as the Labour Corps and Porter Corps whose particular war experience involved "back-breaking toil in porterage, stevedoring, salvage activity and construction work," but have been hitherto relegated to the oblivion by the military historians.