Veteran singer Asha Bhosle launched her YouTube channel last night. The channel which started with a quick but modest number of 430 subscribers,  has zoomed into 114 K subscribers overnight.

Bhosle had earlier said that she would launch the channel with a new song, Main hoon, on the occasion of the 64th birthday of  spiritual guru Sri Sri Ravi Shankar.

The song had its world premiere when it was released at 9 pm IST and 7:30 pm UAE time and has been uploaded and shared by the Art of Living channel.

The 86 year old belied her age as she enthused over her channel. "I'll soon be sharing my personal stories, recording experiences and lots more on my official YouTube channel. So do subscribe if you don't want to miss out!", Bhosle said as she shared the teaser of the song.

I'll soon be sharing my personal stories, recording experiences and lots more on my channel so do subscribe if you don't want to miss out

However no playlists or videos are uploaded in Bhosle’s channel yet, which carries a descriptive bio of the versatile and popular Bollywood playback singer. 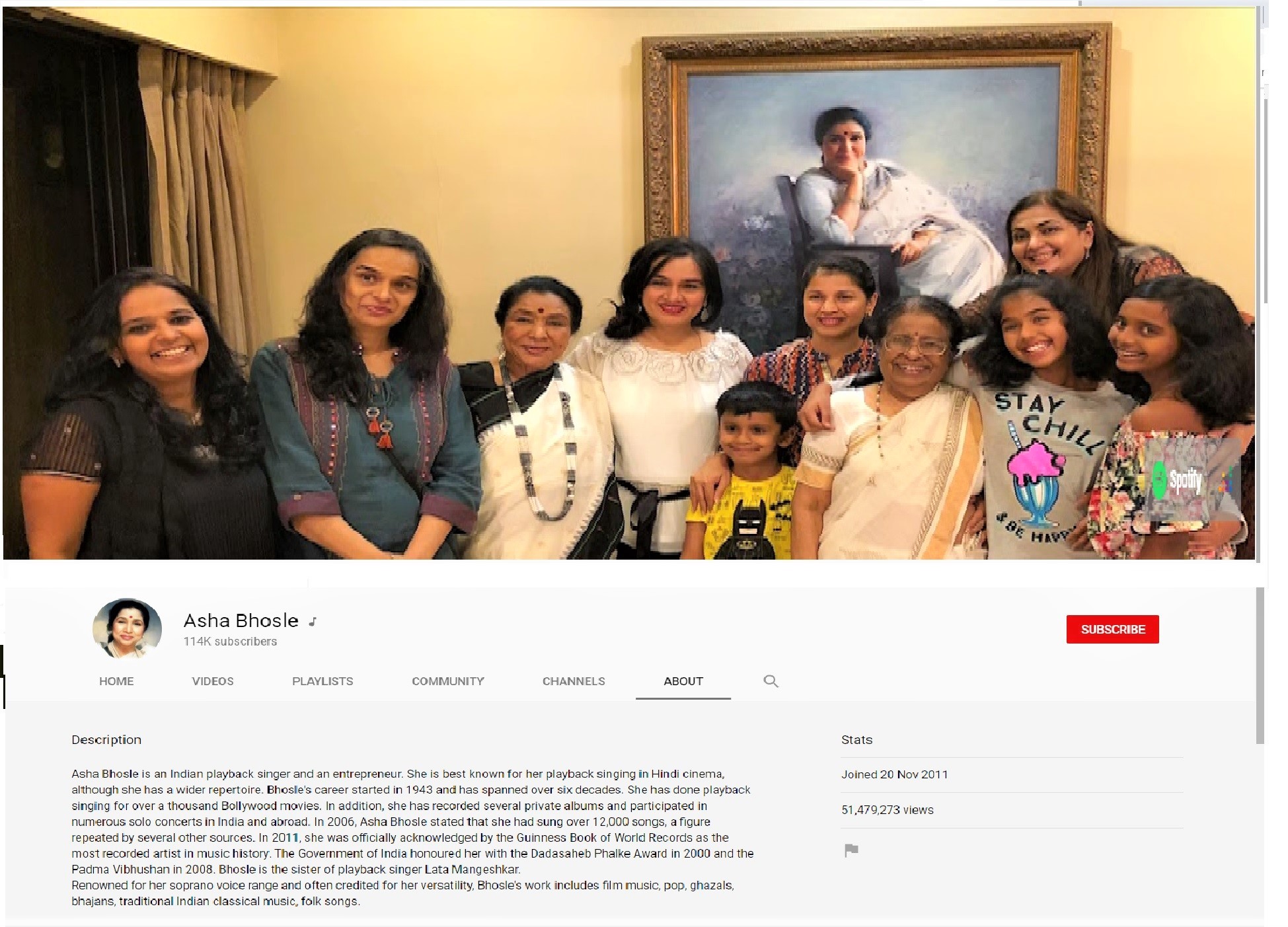 Bhosle’s singing career spanning more than six decades started in 1943 and she has sung more than 12,000 songs spanning across more than thousand movies.

The Government of India honoured her with the Dadasaheb Phalke Award in 2000 and the Padma Vibhushan in 2008.

Happy to announce the launch of my YouTube Channel with the world wide release of - Main Hoon - on the occasion of Sri Sri Ravishankarji’s 64th birthday on 13th May 2020 at 9 pm IST. I will soon be regularly posting videos here. Do subscribe 🙏🏼

One of the Mangeshkar sisters, Bhosle along with her elder sister Lata Mangeshkar, was amongst the greatest playback quartets in Bollywood along with Kishore Kumar and Mohammad Rafi along with titans of Bollywood music such as Hemant Kumar, Manna Dey and Mukesh who worked with stellar music directors such as RD Burman, Laxmikant Pyarelal and O. P. Nayyar.

All the Mangeshkar siblings celebrating my sister Usha's birthday pic.twitter.com/nrkkdqKs8Q

In 2011, she was officially acknowledged by the Guinness Book of World Records as the most recorded artist in music history.

In these days of home arrest, it’s interesting to see how well young kids are adapting to the situation. My 18 year old grand daughter Zanai, launched her you tube channel today https://t.co/KLjsHquWHk and is convincing me to launch one as well, zarasa jhoom loon mein 😊

The veteran singer had earlier tweeted about being convinced by her teenage granddaughter to launch her own YouTube channel.