Jewels that once belonged to Maharani Jindan Kaur, the last wife of Sikh Empire ruler Maharaja Ranjit Singh, and which were later inherited by her granddaughter, Princess Bamba Sutherland, were among the highlights of an auction in London. 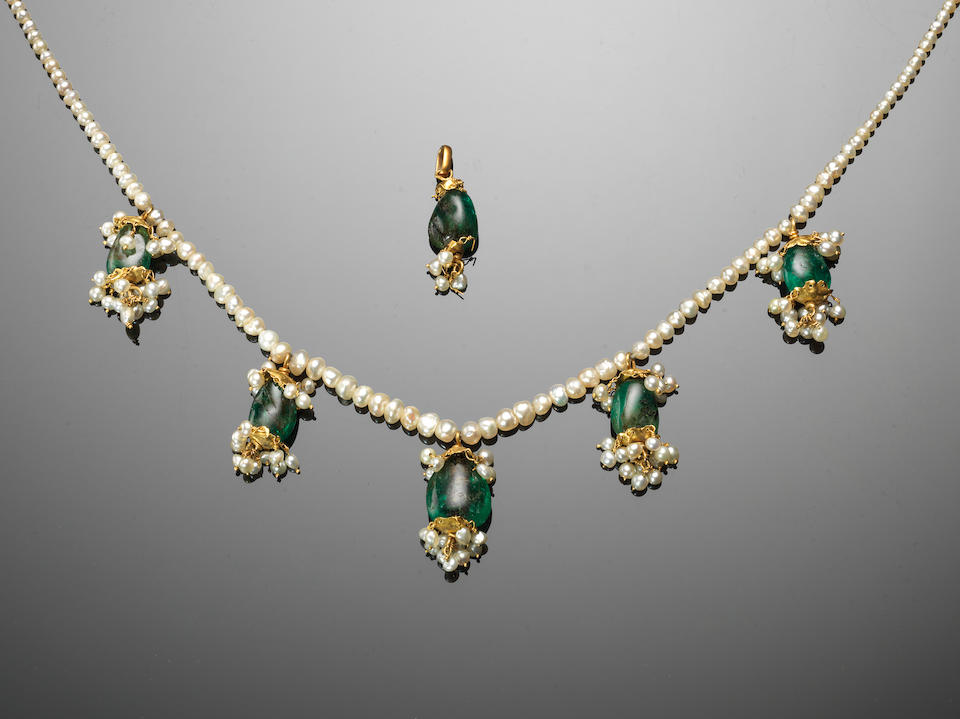 Jewels that once belonged to Maharani Jindan Kaur, the last wife of Sikh Empire ruler Maharaja Ranjit Singh, and which were later inherited by her granddaughter, Princess Bamba Sutherland, were among the highlights of an auction in London. Photo courtesy: Bonhams

A collective lot of a gem-set gold forehead pendant, or chand-tikka, a gem-set gold mirrored roundel and a pearl-mounted gold pendant went under the hammer for over GBP 62,500 and other rare artifacts dating back to the 19th century also attracted many bids at the Bonhams Islamic and Indian Art sale this week.

"As the only surviving widow of Ranjit Singh, Jindan Kaur (1817-1863) led a spirited resistance to the encroachment of the British into the Punjab but was eventually forced to surrender. More than 600 pieces of her jewellery from the legendary treasury of Lahore were confiscated, and she was imprisoned before escaping to Nepal in 1848," noted Bonhams, in reference to the jewellery.

The auction house speculated that the jewellery was almost certainly within the casket of jewels handed back to Maharani Jindan Kaur by the British authorities when she agreed to live in London with her son, Duleep Singh, with whom she was reunited in Calcutta in 1861.

Although Prince Duleep Singh eventually returned to Lahore, his eldest daughter Princess Bamba remained in England, where she had been born and raised, and went on to attend Oxford University and medical school in the US.

"These are wonderful jewels in their own right, made more special still by their rich and fascinating history the circular stoned gold and mirrored brooch was, according to Princess Bamba, formerly part of Maharajah Duleep Singh's horse harness. They represent a remarkable link back to one of the richest treasuries in the world," said Oliver White, Bonhams Head of Islamic and Indian Art.

Some of the other highlights from the auction included a rare and large 19th century panoramic watercolour view of the Golden Temple and the city of Amritsar, attributed to Cyril Herbert (1847-1882). The painting, believed to be the largest depiction of the Golden Temple in watercolour ever to have come onto the market, went under the hammer for 75,062 pounds.

Other Indian treasures included a large and impressive portrait by Colesworthy Grant of Rajah Shere Singh Attariwala a formidable commander during the Second Anglo-Sikh War (1848-49), once owned by the Marquess of Dalhousie, Governor-General of India.