Large-scale protests against CAA in London on Republic Day weekend 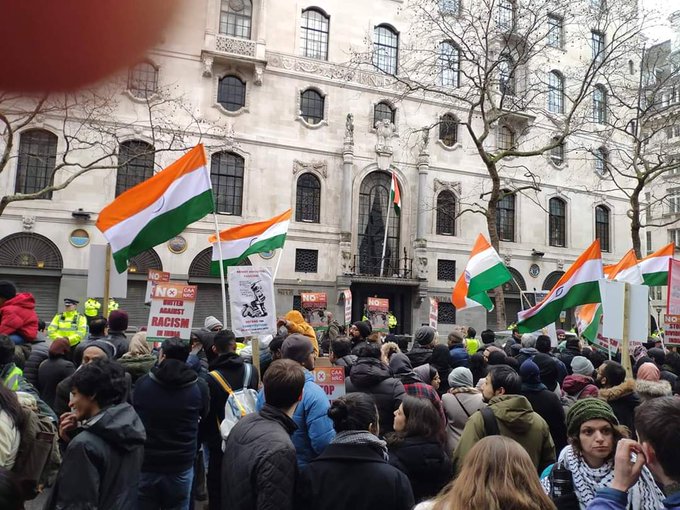 The protesters describied themselves as representatives of diverse and multi-faith Indian communities across the UK. Photo courtesy: Twitter/@MoizNiyazi

The rally involved thousands of people marching while carrying placards around a mile down the street to gather outside the Indian High Commission in London.

The CAA came into force in India last December amid protests in India and around the world.

Despite facing a major diplomatic backlash from the European Union (EU) parliament and the global community, the Indian government has insisted that the new Act does not deny any citizenship rights but has been brought in to protect the oppressed minorities of neighbouring countries and provide them citizenship.

As many as 600 of 751 members of the European Union parliament have moved six resolutions on both the CAA and Kashmir issues, their greatest concern arising over the likelihood of the controversial citizenship law creating the "largest statelessness crisis in the world".

The protesters, describing themselves as representative of diverse and multi-faith Indian communities across the UK, demanded that the CAA be repealed because it “undermines India's secular Constitution”.

They also called for the abolition of the National Register of Citizens (NRC) and National Population Register (NPR), which they said “in conjunction with the CAA, open the way for selective mass disenfranchisement of India's Muslim population.”