Indian Prime Minister Narendra Modi seems to have checked all the boxes on his to-do list for his visit to South East Asia. His itinerary on Day 3 highlighted the deep cultural and religious heritage the island nation shares with India. 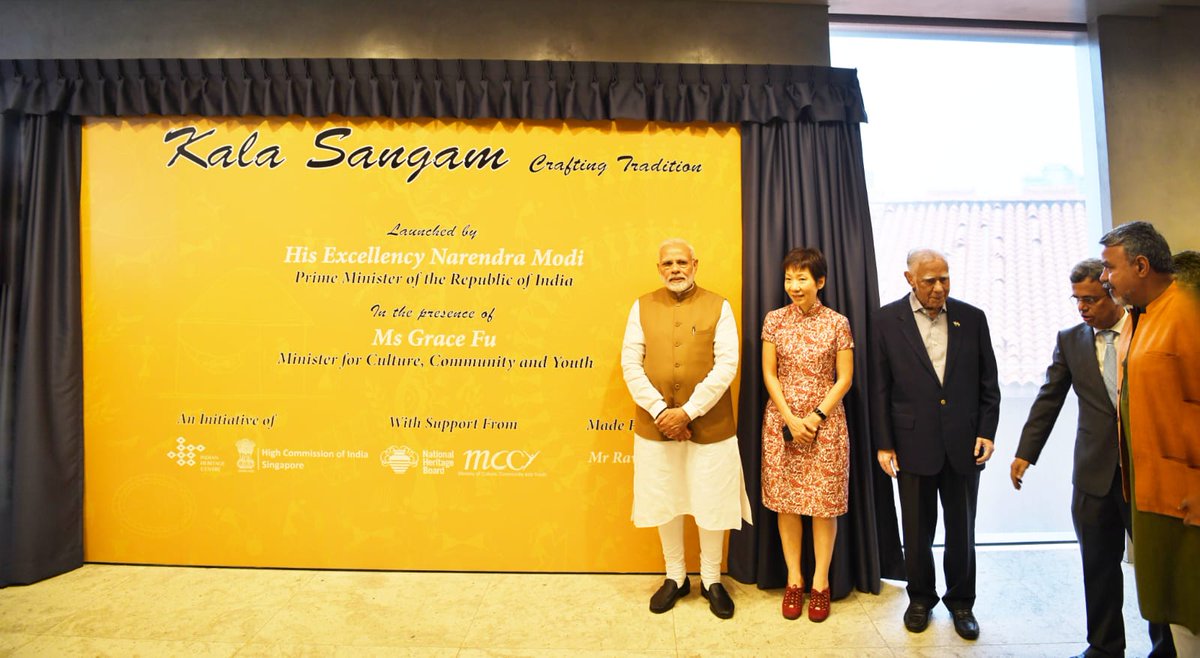 PM Modi launching the Kala Sangam initiative during his visit to the India Heritage Centre in Singapore. Photo courtesy: MEA

The five-day visit included meetings with the heads of state and government of Indonesia, Malaysia and Singapore and delivering the keynote address at the multilateral Shangri-La Dialogue. Apart from forging diplomatic links, the PM also promoted business and economic ties across the region and, as has become customary, got a rousing reception from the Indian diaspora in the region.

The final day of his visit saw the Indian leader exploring the cultural and religious heritage of Singapore, highlighting the similarities with that of India. Modi visited the Indian Heritage Centre (IHC) and launched a long-term platform for the demonstration and enjoyment of traditional Indian crafts at the IHC, titled Kala Sangam. The initiative is made possible through a private cash donation of SGD250,000 to IHC.

“Commendable efforts by the Indian Heritage Centre to bring Singapore and India even closer,” the PM tweeted. He also used the RuPay facility he launched two days ago to buy a Madhubani painting at the IHC.

Kala Sangam is a collaboration between the IHC and the High Commission of India to invite traditional craftspeople from India to the centre, to demonstrate their crafts, promote this important aspect of the Indian community’s intangible cultural heritage, and share this with Singaporeans. It follows the success of the craft demonstrations which are a part of IHC’s ongoing special exhibition Symbols and Scripts – The Language of Craft, which features traditional craftspeople and calligraphers who showcase traditional Indian crafts that come from the hometowns back in India of Singapore’s Indian communities.

Prime Minister #Modi visited the 'Little India' district in #Singapore. He went to the Indian Heritage Centre, where he was given an "ecstatic" welcome by the #Indian community. #ModiInSingapore pic.twitter.com/cC1M4V0uBs

The donation will be used to facilitate 12 craftspeople from India travelling to IHC annually, over a five-year period (2018 to 2022). This gift will be eligible for Singapore’s Ministry of Culture, Community and Youth Cultural Matching Fund provided a dollar-to-dollar (1:1) matching grant to the gift, thereby doubling its impact and value. The schedule of craft demonstrations over the next five years will be curated to relate to Singapore’s calendar of Indian festivals, such as Deepavali and Pongal.

The crafts will span a wide range of disciplines and media, ranging from leather and textile work, and wood carving, to painting and calligraphy.

“Kala Sangam, and its long-term offering of craft demonstrations by traditional craftspeople from India, will allow Singaporeans to personally experience and enjoy these crafts, some of which originate from their ancestors’ hometowns in India,” said Trudy Loh, Director of Heritage Institutions at the National Heritage Board. She said the IHC has always sought to showcase the rich heritage and culture of the Indian community in Singapore, and to highlight the connections of Singapore’s Indian community to the larger global diaspora.