Mumbai Police will provide security, including surveillance by drones, for tomorrow’s concert of Canadian pop star Justin Bieber at the DY Patil Stadium, an official said on Monday. Expecting a turnout in excess of 45,000 for the live show, Navi Mumbai Police Commissioner Hemant Nagrale said around 500 police personnel and 25 officers would be deployed for security and emergency disaster management at the venue.

Dubai is incredible... India you are next. @Amit_Bhatia99 u ready? #PurposeTourStadiums

The 23-year-old icon is likely to reach Mumbai today and perform as part of the Asia leg of “Bieber’s Purpose World Tour” for his first performance in India tomorrow. The tour is to promote his fourth album, the critically-acclaimed Purpose. Tickets for the show can be purchased here.

Bieber may be making a guest appearance on Karan Johar’s popular chat show, Koffee with Karan. The second day of his visit will entail a tour around Mumbai. The hotspots being zeroed in on include, the Gateway of India, Kala Ghoda and Mani Bhavan. 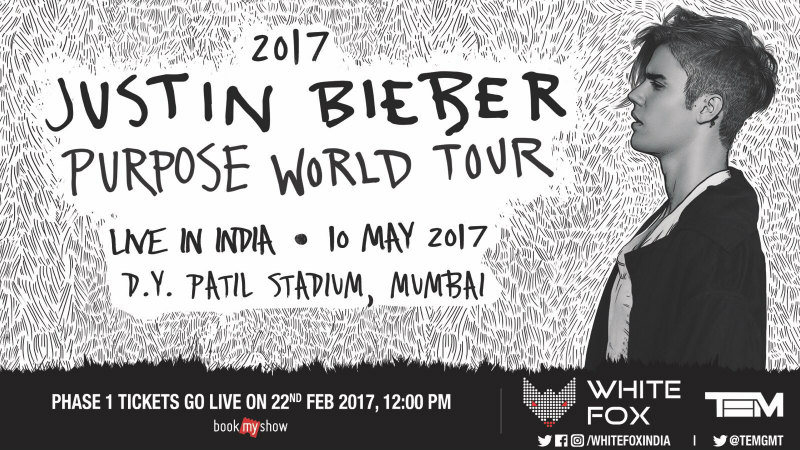 Other stops on Bieber’s tour include Tel Aviv and Dubai. Nagrale said police had been deployed at various entry-exit gates and the event venue to manage the crowds. Salman Khan’s personal bodyguard Shera will be giving security to the young star.

Inside the stadium, plainclothes police would be on watch, a special police control room would be functional and a CCTV surveillance system with a command centre would monitor the event. Prior to the main concert, the entire stadium would be checked by the Bomb Detection and Disposal Squad. Throughout the event, drones mounted with cameras shall provide live feeds to the police control room at the venue.

The organisers, White Fox, shall deploy private security agencies for crowd management and ticket checking. Navi Mumbai Police will be attending to overall security. The organisers have arranged the parking slots for around 15,000 and shuttle services to and from the stadium.