“Just work it out”, Trump tells India and Pakistan on Kashmir 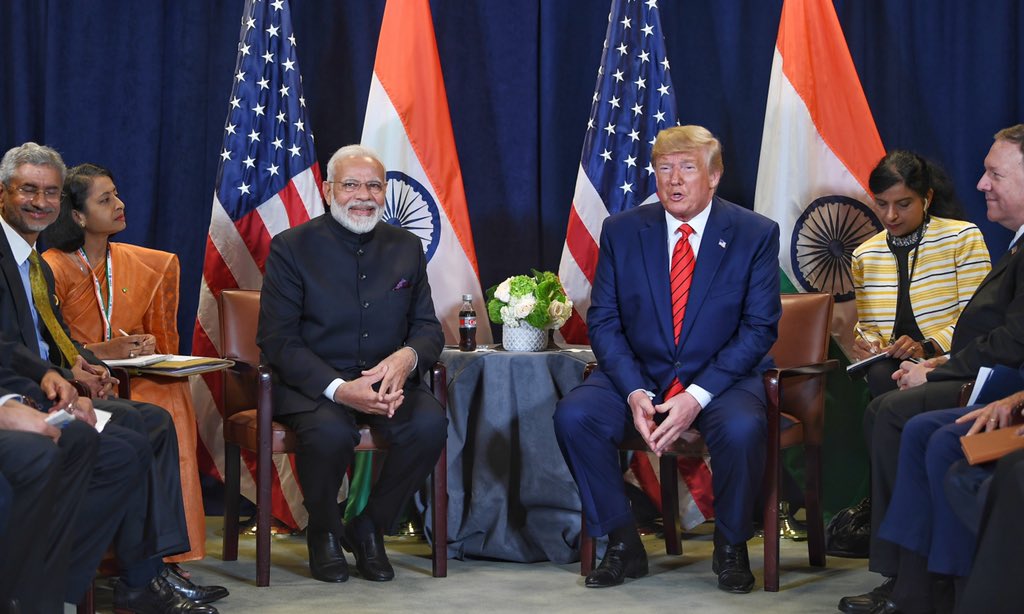 Trump and Modi at the bilateral meeting on Tuesday. Photo courtesy: Twitter/@narendramodi

United States President Donald Trump said on Wednesday that he would do "whatever he can" to settle the dispute over Kashmir between India and Pakistan.

Saying that he has had "very productive conversations" with both Indian Prime Minister Narendra Modi and his Pakistani counterpart Imran Khan, Trump said, "With respect to Pakistan and India, we talked about Kashmir. Whatever help I can be, I said, I offered, whether it's arbitration or mediation or whatever it has to be.”

Speaking at a news conference at the United Nations General Assembly in New York Trump added, "You look at the two gentlemen heading those two countries... two good friends of mine. I said, fellows work it out, just work it out. Those are two nuclear countries, got to work it out."

President Trump has repeatedly offered to mediate between India and Pakistan on Kashmir, an offer that New Delhi has firmly rejected every time, reasserting its stand that this is a bilateral issue.

On Tuesday, the US President once again offered to mediate just hours before he met Modi for bilateral talks in New York.

"I think as far as Pakistan is concerned, India, they're talking, I'm certainly willing to help. I think they would in a certain way like my help. But they've to both want it. They have very different views and I'm concerned about it," Trump said on Tuesday after meeting Imran Khan.

Later the same day, during the meeting with Modi, the US President "encouraged him to improve ties with Pakistan and fulfil his promise to better the lives of the Kashmiri people," the White House said in a statement.

India however has once again reiterated that there is no scope for any third party intervention on Kashmir. "There is no change in that position", Foreign Ministry spokesperson Raveesh Kumar said. "I think it has been articulated by Prime Minister earlier. It was articulated yesterday by the foreign secretary so that position remains.”