Following his Parliamentary setback, United Kingdom (UK) Prime Minister Boris Johnson has reportedly sent three contradictory letters to the European Union (EU) requesting another Brexit delay and simultaneously arguing against an extension. Interestingly, Johnson allegedly refused to sign the letter asking for an extension, which was a photocopy of a draft set out in UK law. 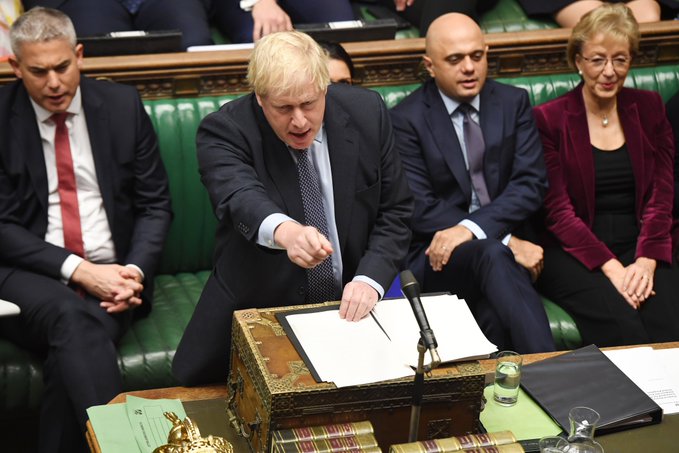 The first of the letters sent to European Council president Donald Tusk contains the unsigned request for an extension that he is legally required to deliver. Photo courtesy: Twitter/@HoCPress

The PM was required by law to ask the EU for an extension to the October 31 deadline after losing a vote in Parliament's House of Commons on Saturday.

The first of the letters sent to European Council president Donald Tusk contains the unsigned request for an extension that he is legally required to deliver. This letter asks Tusk for the Brexit deadline to be extended until 11 pm on January 31, 2020. The wording was copied and pasted directly from the so-called Benn Act. Opposition MPs passed this legislation in September in an attempt to prevent a no-deal Brexit at the end of this month.

In the second letter sent to the EU, Johnson argues against granting an extension to the United Kingdom, saying that a further Brexit delay would be a mistake.

This letter, signed by Johnson, is an attempt by the prime minister to distance himself from the legally required request for a Brexit extension, said political experts.

In the letter, the PM wrote, "Regrettably, parliament missed the opportunity to inject momentum into the ratification process for the new Withdrawal Agreement."

Explaining that the legally mandated extension request has been sent, Johnson added, "It is, of course, for the European Council to decide when to consider the request and whether to grant it. In view of the unique circumstances, while I regret causing my fellow leaders to devote more of their time and energy to a question I had hoped we had resolved last week, I recognise that you may need to convene a European Council."

The third letter was from Sir Tim Barrow, the UK's permanent representative to the EU, to Jeppe Tranholm-Mikkelsen, the secretary-general of the Council of the European Union.

Sir Tim's message serves as a cover note for the unsigned letter and explains it is required under the terms of the Benn Act.

On Saturday, in a parliamentary session, UK lawmakers voted 322-306 to withhold their approval of the Brexit deal until legislation regulating its implementation had passed, which seemed to put an end to Johnson’s hopes of an October 31 Brexit as he is now legally required to ask the EU for an extension under the terms of the Benn Act.