Every year, the Jaipur Literature Festival (JLF) celebrates poetry through the Mahakavi Kanhaiyalal Sethia Award in recognition of India’s plethora of young and talented poets.

In addition to a cash prize of INR 1 lakh, the winner received a memento of appreciation along with a felicitation at the festival. 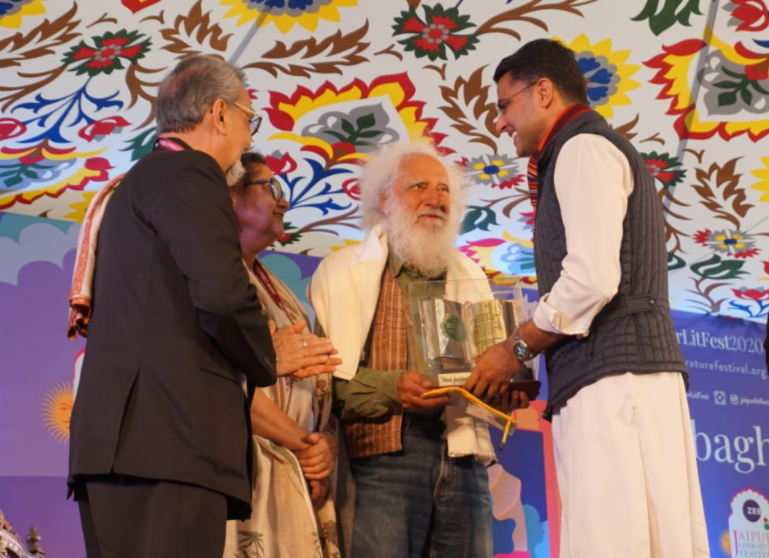 To celebrate and promote poetry, a distinguished jury present the Mahakavi Kanhaiyalal Sethia Award in memory of the poet. Photo courtesy: Twitter/@JaipurLitFest

Ranjit Hoskote is this year’s winner of the 7th Mahakavi Kanhaiyalal Sethia Poetry Award 2022, following a unanimous decision by the jury committee.

His poetic tradition extends from pioneers of modern poetry in English in India like Nissim Ezekiel, Dom Moraes, Arun Kolatkar and others, and yet makes a unique mark of its own through finely wrought, well-chiselled wordcraft and the deft employment of images and metaphors. His poetry is noted for the fusion of form and content, sometimes the content determining the form.

Hoskote is also a cultural theorist and curator. His six collections of poetry include 'Vanishing Act', 'Central Time' and 'Jonahwhale'. His translation of a celebrated 14th-century Kashmiri woman saint’s poetry has appeared as 'I, Lalla: The Poems of Lal Ded'. Hoskote curated India’s first-ever national pavilion at the Venice Biennale, under the title ‘Everyone Agrees: It’s About to Explode’. He has received the Sahitya Akademi Golden Jubilee Award, the Sahitya Akademi Translation Award, and the S H Raza Literature Award. His poems have been translated into German, Hindi, Swedish, Spanish, and Arabic.

Mahakavi Kanhaiyalal Sethia was an internationally acclaimed poet, freedom fighter, social reformer, philanthropist, and environmentalist who received the Padma Shri award in 2004 and Rajasthan Ratna in 2012. Sethia Ji authored 42 books in Hindi, Urdu, and Rajasthani, which have been translated into English, Bengali, Marathi, Kannada, and German. He was selected as a ‘Living Legend of the 20th Century’ on the occasion of the bi-centenary celebration of the US Library of Congress in Washington. He was also awarded the Sahitya Akademi Award for his work Lilatamsa and the Jnanapitha Moortidevi Award in 1986.

The Mahakavi Kanhaiyalal Sethia Award is given out after a careful selection process by an eminent jury comprising renowned litterateurs and discerning connoisseurs; Namita Gokhale, Sanjoy K. Roy, Jaiprakash Sethia, Nirupama Dutt, and Siddharth Sethia of the KL Sethia Foundation.

Sanjoy K Roy, Managing Director of Teamwork Arts and producer of the Jaipur Literature Festival, said, “This year, our nominees have been numerous, each showcasing their brilliance and artistry with words, creating magic and transporting us to a different realm. Our award-winner for 2022 is the celebrated Ranjit Hoskote, a poet who loves weaving his encounters into tapestries, so that he can forever hide in them. Our task is to seek him out.”