InSpreneur: Startups, investors and experts highlight potential for partnership between India and Singapore

Kicking off the weekend diaspora megaconference today, the unique inaugural India-Singapore/ASEAN Entrepreneurship Bridge (InSpreneur), was held at Marina Bay Sands Convention Centre in Singapore. Designed as a platform to connect startups and investors in India and Singapore, and to promote collaboration in the ASEAN region, InSpreneur focussed on startups, fintech, cybersecurity, disruptive technologies in manufacturing and India Digital Stack. 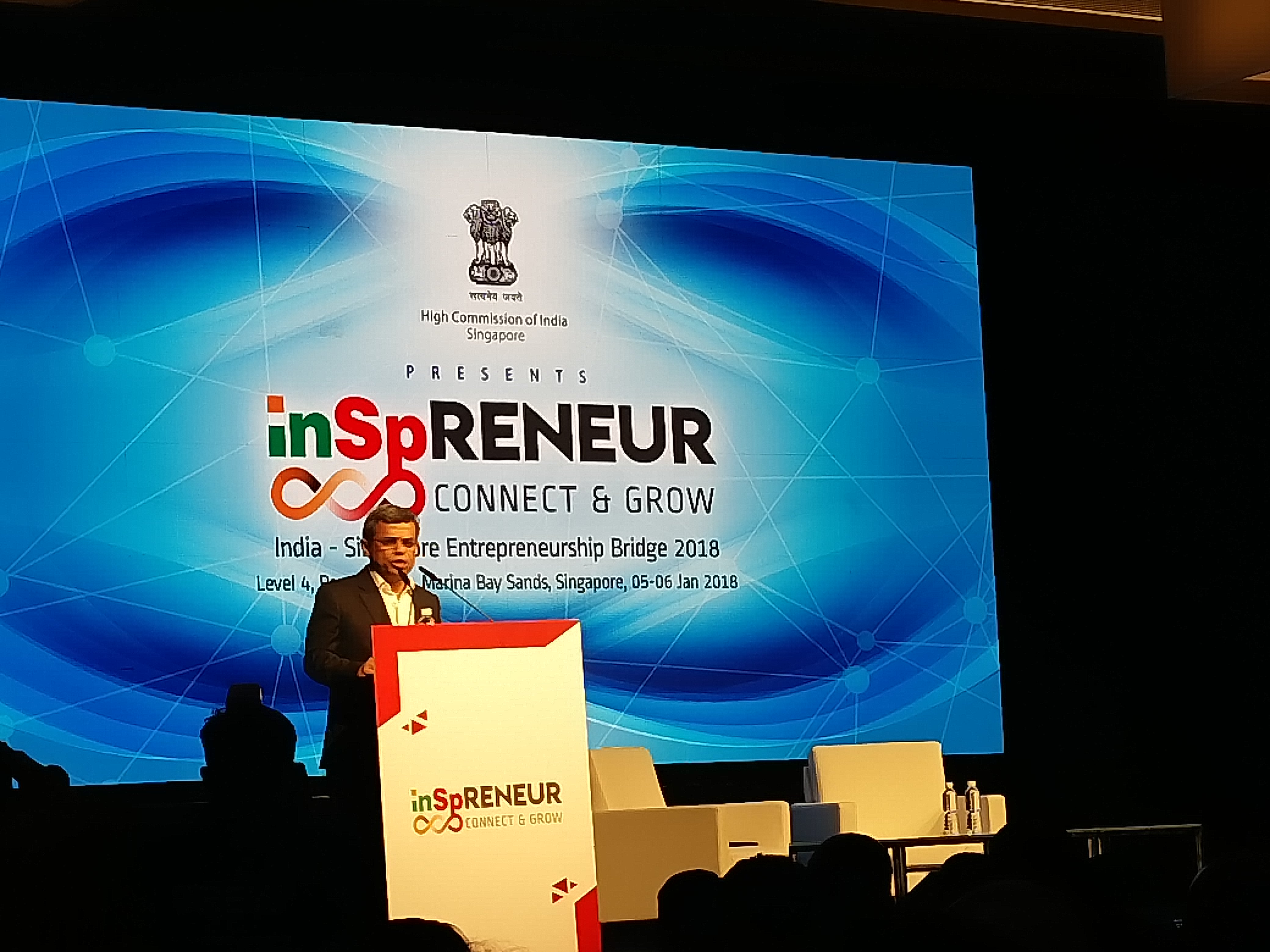 HE Jawed Ashraf, High Commissioner of India, Singapore, highlighted the potential and desire for partnership between India and Singapore. Photo: Connected to India

Around 250 startups (120 from India) are participating in the two-day event, which will run parallel to the ASEAN India Pravasi Bharatiya Divas (PBD) starting tomorrow. Over 75 investors attended the investor pitching session as well.

In his welcome address, HE Jawed Ashraf, High Commissioner of India, Singapore, highlighted the potential and desire for partnership between India and Singapore and that InSpreneur was a platform to connect enterprises of both countries and ASEAN and bring them closer together.

“What struck me most was this vibrant talented pool of young brilliant minds in Singapore; so many of them of Indian-origin, keen to be part of the great transformation taking place in India. All the young startups and entrepreneurs I met said that if they wanted to be global enterprises, India had to be their platform both in terms of scale and talent,” the high commissioner said. 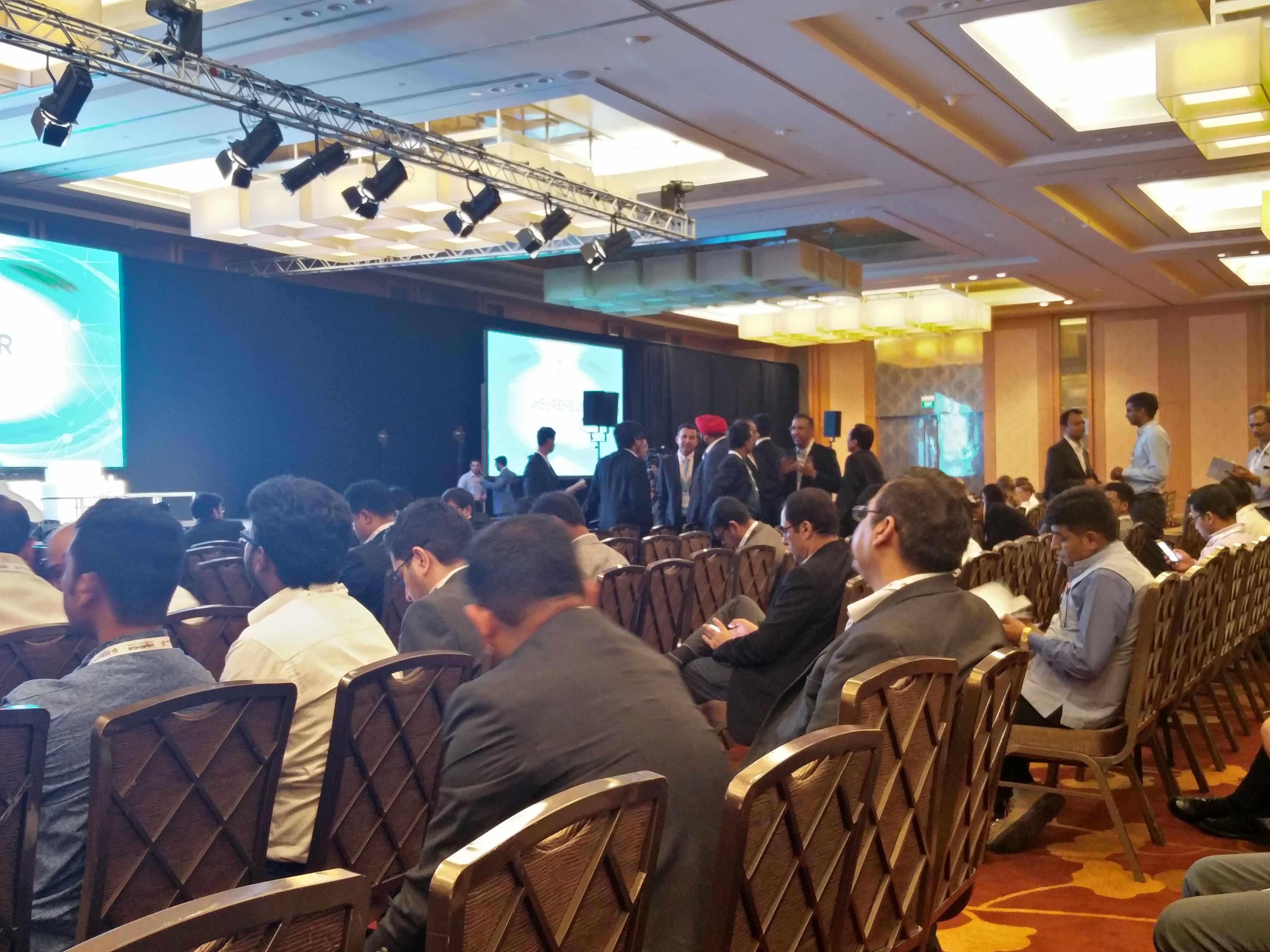 The High Commissioner went on to say that there was a new wave of entrepreneurship in India, changing the mindset from job seekers to job creators. Photo: Connected to India

He went on to speak about the buzz generated by the IndiaStack initiative, and highlighted how it was gaining attention across the world, with official agencies in Singapore as well as the UN expressing their interest in studying the ongoing process.

“It is a digital revolution in the making in India that is transforming governance, changing the way public services are delivered, empowering the weak, mainstreaming the marginalised and bringing the formal sectors of the economy closer to people in the remoteness of the villages,” he said. “It has brought banking, insurance, pensions and delivery of government benefits within the direct reach of hundreds of millions of people in only three years,” he added.

He highlighted how there was a new wave of entrepreneurship in India, changing the mindset from job seekers to job creators. 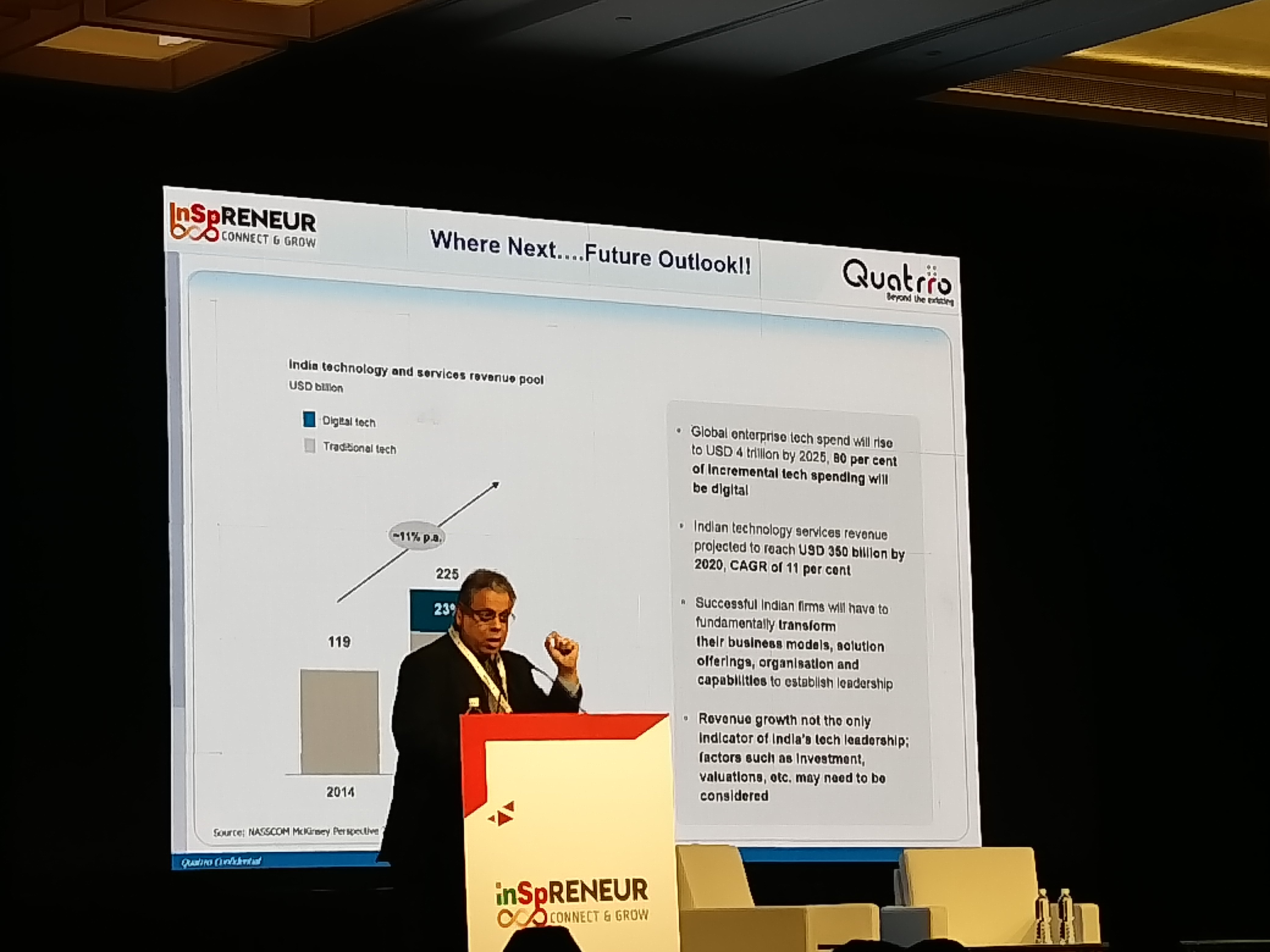 Raman Roy, Chairman, National Association of Software & Services Companies (NASSCOM), in the keynote address highlighted that India, the third largest startups market in the world, needs to reskill its workforce in the next two years. Photo: Connected to India

Raman Roy, Chairman, National Association of Software & Services Companies (NASSCOM), India delivered the keynote address. The MD and CEO of business and knowledge processing services firm Quatrro highlighted that India, the third largest startups market in the world, needs to reskill its workforce to keep up with the rapid transformation in the digital sector.

“Today, digital technology implemented anywhere in the world is mostly created by the Indian industry, partly onshore and partly offshore,” Roy stated. “The millennials are the single biggest asset we have. The fact of a young workforce has led to us studying what to create for them.”

He detailed how the concept of startups has evolved over the years to become an integral part of the global economy, and that India is scaling up in the global ranking of startup sectors across the world. “FinTech and HealthTech are the leading verticals both in India and Singapore; that is where the collaboration between the two countries can be significant.”

“We have identified that 50 per cent of the IT-BPM workforce (around 1.2 million) needs to be reskilled over the next three years. The number of workers who will need new training across India adds up to about 40 million,” he added, speaking about the effects of the rapid evolution of the digital sector.

He also said that thanks to increased internet penetration and connectivity, the startup process has moved beyond the big cities in India and people in smaller towns are providing fresh perspectives and ideas. Roy also pushed for developing methods other than financial valuation as a measure of a startup’s success. 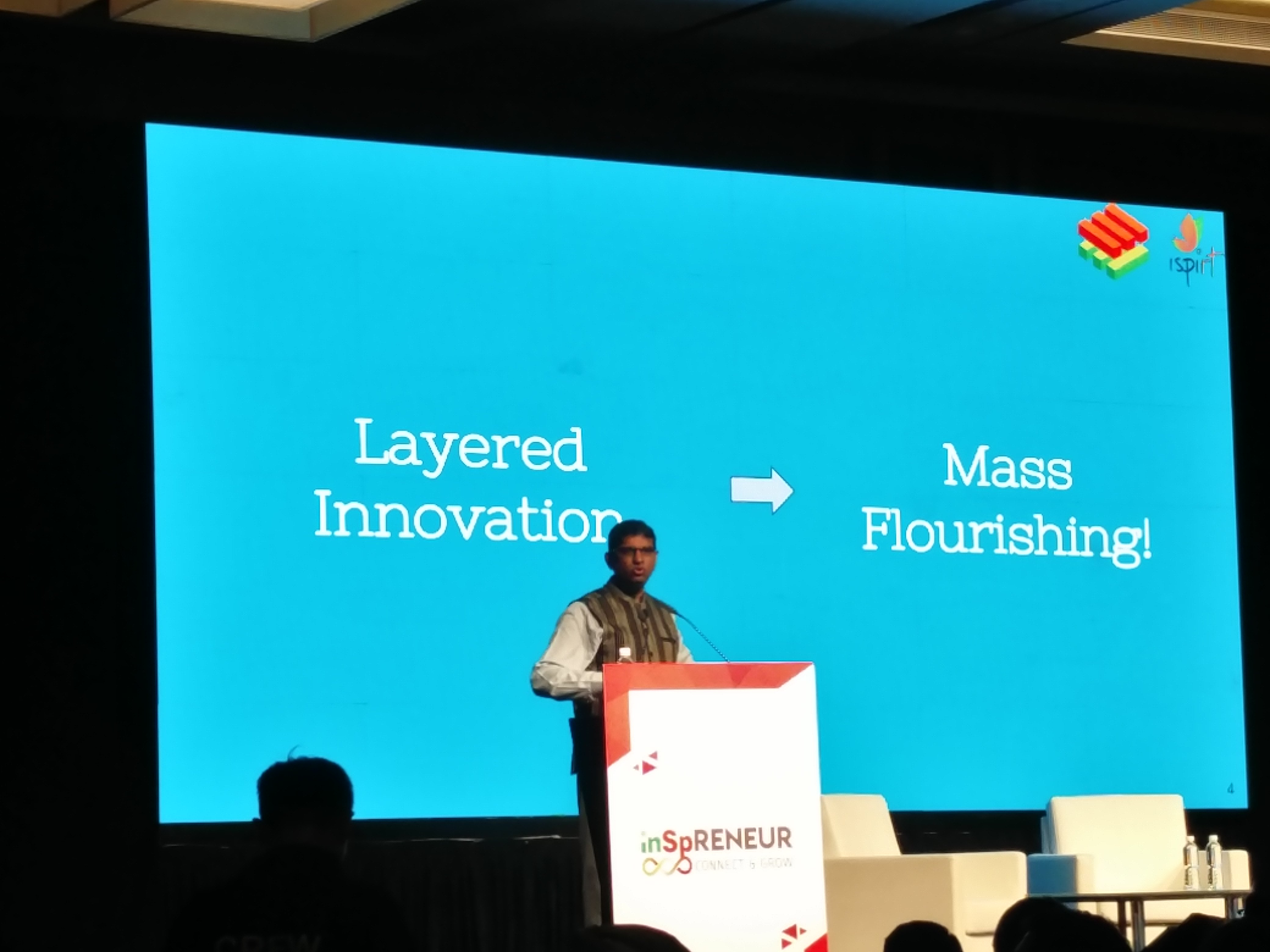 Sanjay Jain, Chief Innovation Officer, CIIE, IIM Ahmedabad, a core member of AADHAAR, stated that the rapid increase in e-services has led to India going from a data-poor to a data-rich nation. Photo: Connected to India

Sanjay Jain, Chief Innovation Officer, CIIE, IIM Ahmedabad, a core member of AADHAAR, spoke about the evolutionary progression of digital technology which formed the IndiaStack – a set of applied programming interfaces (APIs) that allows firms to develop more complex applications in the digital sector. He highlighted that the rapid increase in e-services has led to India going from a data-poor to a data-rich nation. During the course of his speech, he highlighted government initiatives like the PM Jan Dhan Yojana, the Aadhaar card programme and the Unified Payments Interface which have led to the current form of tech development in India.

“From the start of the IT revolution till today, new tech has stacked on top of the old in a progressive manner, layering to provide more complex and convenient services,” Jain said. He highlighted how new systems in India such as Digilocker and GSTN, would formalise transactions and reduce dependence on cash.

Addressing the issue of privacy, he said, “We are digitising very rapidly, and this comes with its own dangers on privacy and security. We have a privacy-enabled framework that allows data to be shared with consent.” He also highlighted how the new developments had led to freedom from physical and geographical limitations in banking, finance and similar sectors.

The event continued with panel discussions on cybersecurity, market access and investment in India and ASEAN before the speed-dating and investor pitch sessions across the floor. InSpreneur is set to continue tomorrow with a panel discussion on the ASEAN India Economic Partnership as part of the PBD schedule.