The death toll in the earthquake that shook Indonesia's main island of Java climbed to 162 as rescuers desperately searched for survivors in the rubble of devastated buildings. 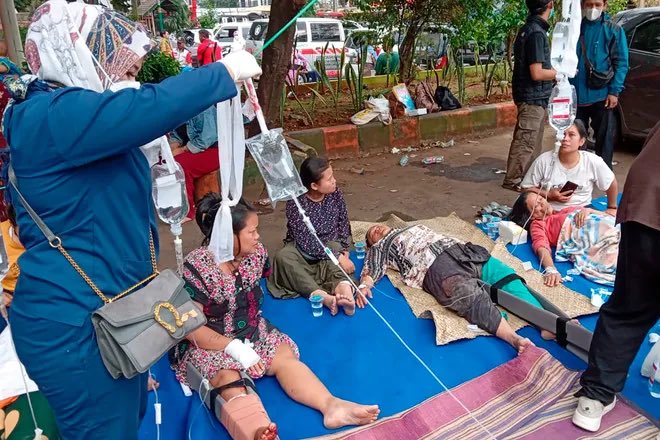 Drone footage taken by AFP showed the extent of a quake-triggered landslide where a wall of brown earth is only punctuated by workers using heavy machinery to clear a road. Photo courtesy: Twitter/@KhaledBeydoun

As bodybags emerged from crumpled buildings in Indonesia's most populous province, rescue efforts turned to any survivors still under debris in areas made hard to reach by the mass of obstacles thrown onto the roads by the quake.

The epicentre of the shallow 5.6-magnitude quake yesterday was near the town Cianjur in West Java where most of the victims were killed as buildings collapsed and landslides were triggered.

One of the dozens of rescuers, 34-year-old Dimas Reviansyah, said teams were using chainsaws and excavators to break through piles of felled trees and debris to reach areas where civilians were believed trapped.

"I haven't slept at all since yesterday, but I must keep going because there are victims who have not been found," he said.

Drone footage taken by AFP showed the extent of a quake-triggered landslide where a wall of brown earth is only punctuated by workers using heavy machinery to clear a road.

President Joko Widodo visited the area today, offering compensation for victims and ordering disaster and rescue agencies to "mobilise their personnel" to prioritise the evacuation of victims.

"On behalf of myself, on behalf of the government, I would like to express my deepest condolences," he said.

Indonesia's national disaster mitigation agency, or BNPB, said at least 25 people were still buried under the rubble in Cianjur as darkness fell yesterday.

The BNPB offered a lower death toll of 103 as of today morning and said 31 people remain missing.

Some of the dead were students at an Islamic boarding school while others were killed in their homes when roofs and walls caved in on them.

"The room collapsed and my legs were buried under the rubble. It all happened so fast," 14-year-old student Aprizal Mulyadi told AFP.