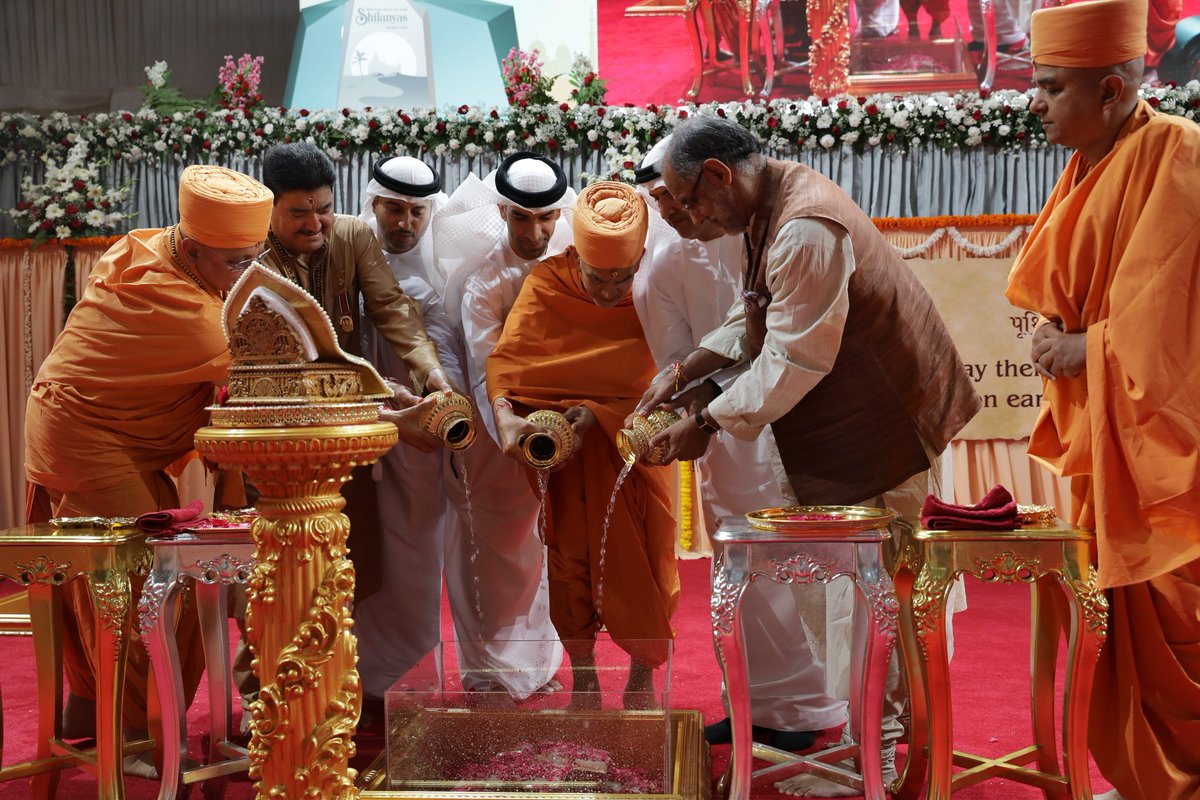 Indians working in UAE rejoiced as the foundation stone of first Hindu temple was laid in Abu Dhabi on Saturday, an event that marked a defining moment in India-UAE relations which are already on the upswing.

For a three-million strong diaspora working in the Gulf state for decades, with sizeable number of Hindus, it is like their prayers heard after Prime Minister Narendra Modi formally announced last year the plan to build a temple after his consultations with Crown Prince of Abu Dhabi Mohammed bin Zayed al-Nahyan.

At a ceremony attended by thousands of Indian, the faithful joined the Mahapuja for sanctifying each brick to be used for Shilanyas of the temple.

Indian Ambassador to UAE Navdeep Suri said it was a "momentous occasion" for the Indian community in UAE. 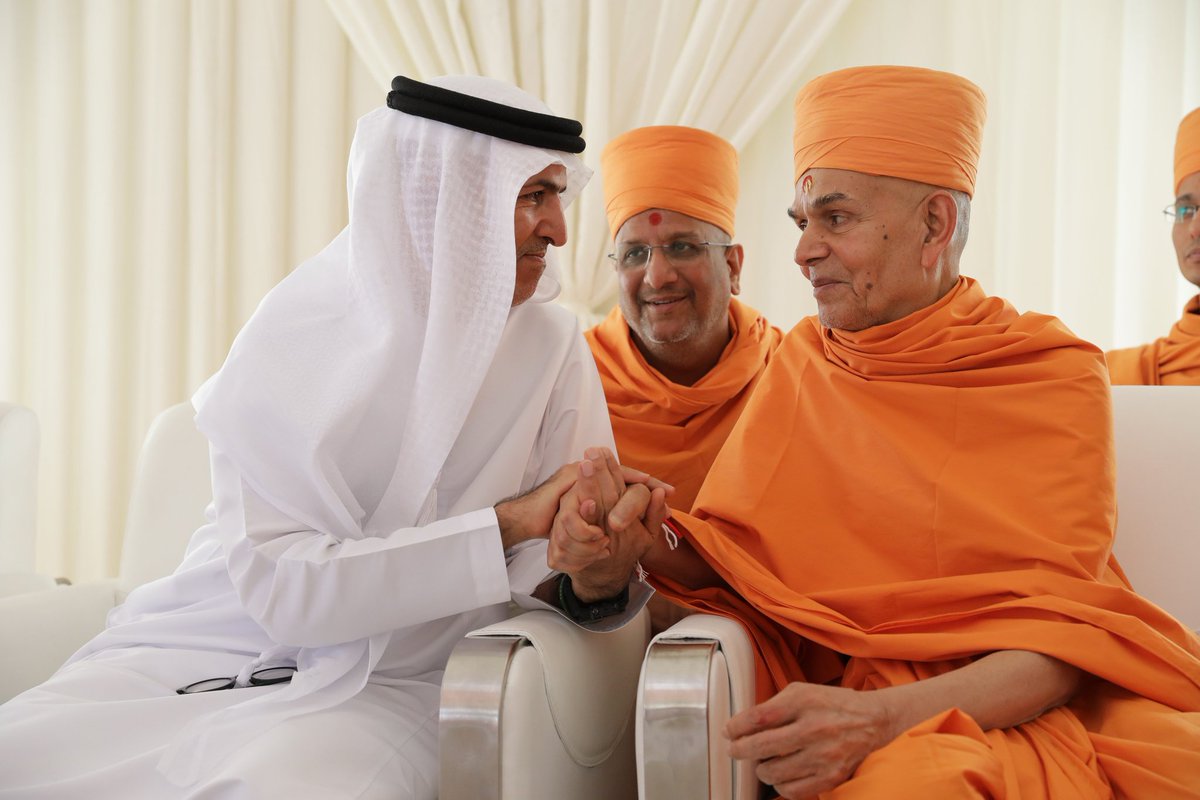 "I was privileged to participate in the Shilanyas ceremony and read out the address of Prime Minister Narendra Modi. UAE government was represented at the event by two cabinet ministers and several senior officials," Ambassador Suri said.

Since PM Modi could not attend the ceremony, as speculated earlier, being preoccupied with the election campaign in India, Ambassador Suri read out his message to Swami Brahmaviharidas.

"I offer my prayers on the auspicious occasion of this Grand Shilanyas Mohatsav of BAPS Hindu Mandir in Abu Dhabi. When complete, this temple will symbolise the universal human values and spiritual ethos that form a shared heritage of both India and the UAE. This embodies timeless Vedic values of 'Vasudhaiv Kutumbkam' The Whole World is a Family and 'Aa Noa Bhadra Krtavo Yantu Vishvta' Let noble thoughts come to us from all sides," PM Modi said.

"On behalf of 130 crore Indians, it is my privilege to convey our greetings to my dear friend and the Crown Prince of Abu Dhabi, His Highness Mohammad bin Zayed al Nahyan. I deeply appreciate his vision for the future of the relationship between Indian and the UAE, and for the entire region. I place on record, our appreciation for the continued support of His Highness Sheikh Mohammad bin Zayad al Nahyan and His Excellency Sheikh Nahan Mabarak al Nahyan," PM said.

"UAE is celebrating the Year of Tolerance. This temple, is an expression by the United Arab Emirates, of their love, friendship, and faith in India and the Indian community. I am sure the Indian community in the UAE, shall accept this generosity, with humility and responsibility. Through your commitment to work and values, I urge each one of you, to bring pride and honour to both India and the UAE," PM said.

"Today, our thoughts also turn to His Holiness Pramukh Swami Maharaj ji, whose blessings are always with each one of us. He shall always continue to inspire us. I still remember fondly, the description of the temple and its premises given by Swami Brahmavihari and his team. The temple will reflect India's timeless values of faith, harmony and love. I am sure this temple will be a source of inspiration for the 33 lakh Indians residing in the UAE as well as of people from all other cultures and communities. I am grateful to all of you, who are contributing immensely to the building of this great centre of art, culture and spirituality," the PM said. 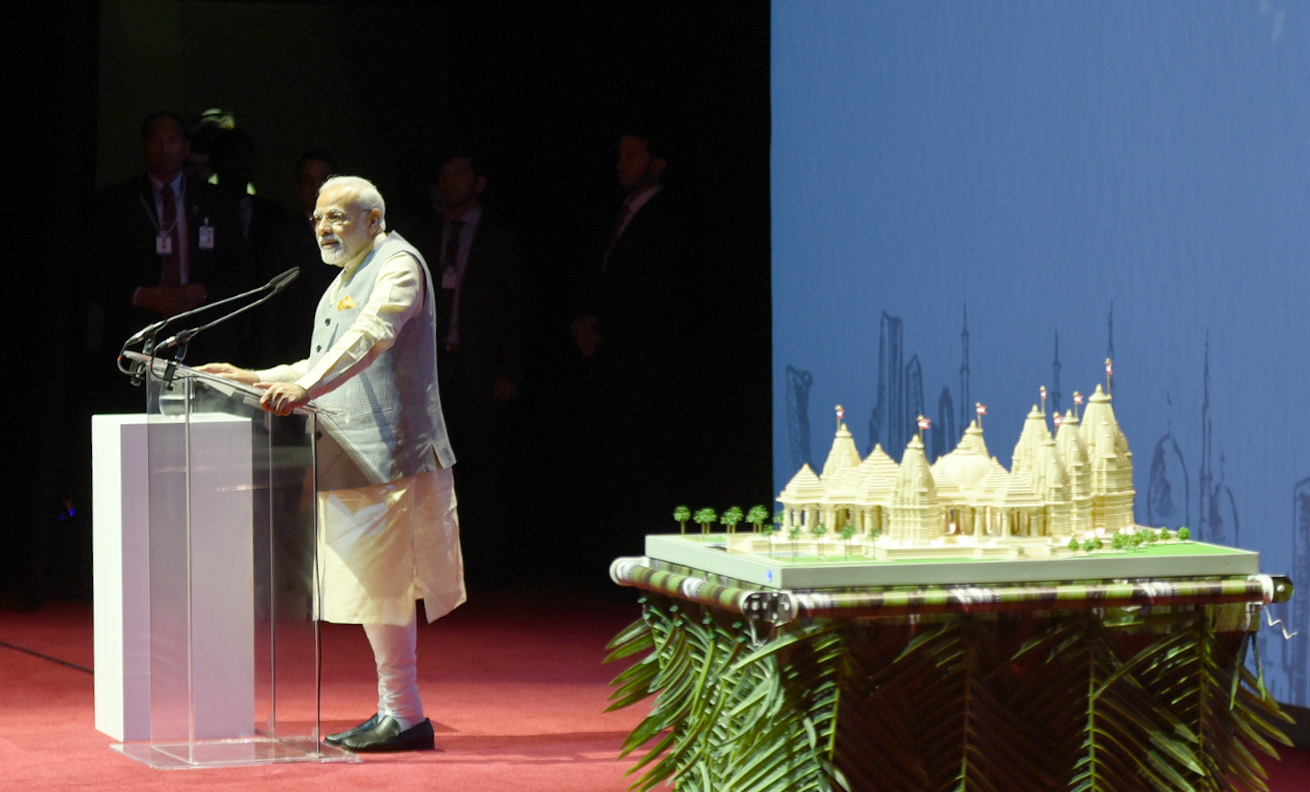 Prime Minister Narendra Modi, with replica of temple on his side, addressing the Indian community at the iconic Dubai Opera, in Abu Dhabi, United Arab Emirates on February 11, 2018. Photo courtesy: PMO

The stage for the temple was set last year itself when Modi came to UAE during his three-nation tour. Addressing the Indian diaspora at a community reception in Dubai, the PM recalled the welcome accorded to Crown Prince of Abu Dhabi as the Chief Guest of Republic Day function in 2017.

PM observed that the Indian community also "sowed the seeds of their dreams" along with the dreams of local people and also with the same commitment by considering this place as their own home. "And, in a way, we have been able to experience a very good partnership among the human groups in the gulf countries. In UAE, people were surprised when His Highness Crown Prince took the initiative of constructing a temple in Abu Dhabi. I would like to express my gratitude to his highness crown prince on behalf of all the 1.25 billion Indians. The construction of a temple! And that too in the form of a bridge of goodwill!" Modi said.

The PM noted that Indians have been raised in a tradition in which a temple is a medium for humanity. And where a holy place is a Catholic agent of humanity, where a holy place is an agent of harmony. "I believe that this temple will be unique in terms of architecture, in terms of technology, and in terms messaging in any case. But an opportunity will also be there for making the world community feel the mantra which we have followed for living our lives that is: the whole world is one family. And because of this thing, it will also become a medium for acquiring a unique Indian identity," he said. 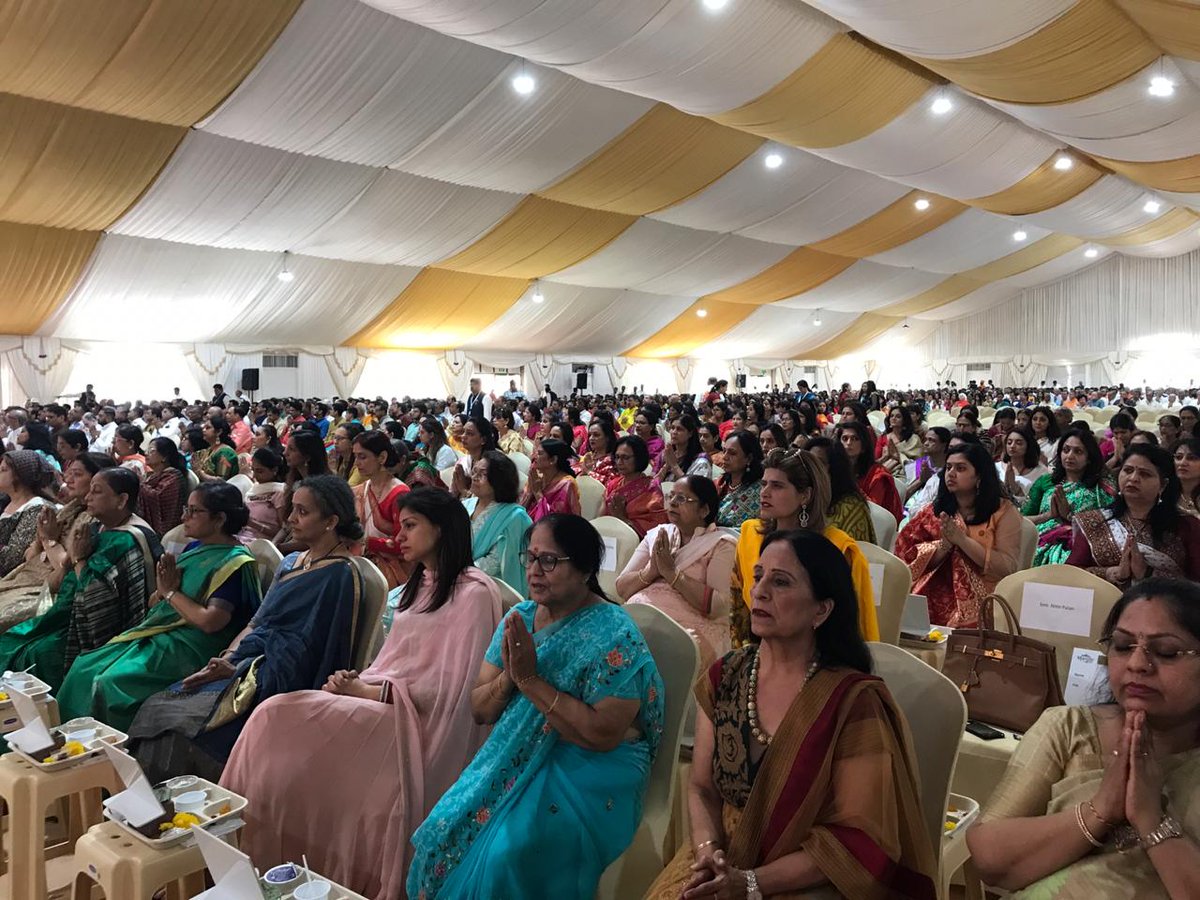 "I would like to tell all those who are related to the construction of the temple that the rulers of this place have shown so much respect for India, have given so much respect to India’s cultural traditions that now it is our responsibility not to leave any loose end, not to commit any mistake. It will be a compelling responsibility for all those related with the construction of the temple, for all the future devotees that there should not be anything that might hurt the high ideals and principles of humanity even a bit. I have this expectation from all of you," he added.