Indian students have again brought laurels to Dubai as they have won the first prize at the second Youth for Public Transport (Y4PT) Hackathon for developing a smart app that uses Augmented Reality (AR) to encourage people to use public transport.

The hackathon has been organised by Dubai’s Roads and Transport Authority (RTA). 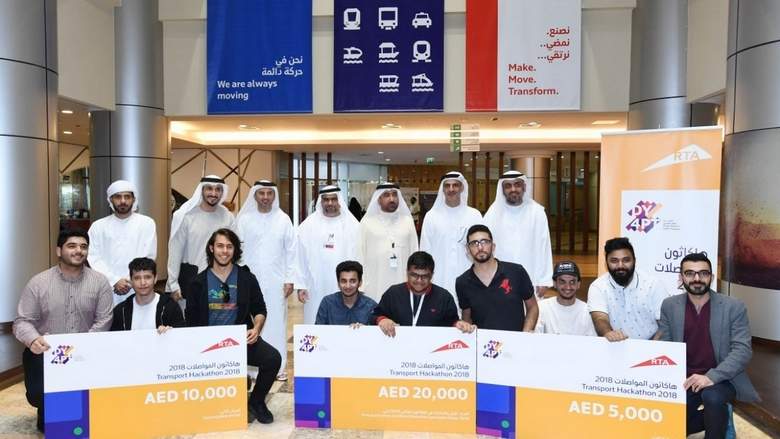 The three winning teams which participated in the 'Youth for Public Transport'(Y4PT) Hackathon organised at Dubai. Photo courtesy: Facebook page of RTA

The Indian expat team which participated in the competition included Bilal Shabandri, Kevin Martin, Saugaat Al Abadi and Shaurya Sood. They created the app 'Na'eem Service' during the three-day hackathon.

The winning team took the top prize of AED20,000. They will also represent United Arab Emirates (UAE) at the World Hackathon which will take place during the MENA UITP (International Association of Public Transport) Congress and Exhibition in Dubai from April 23-25 this year.

In the competition, about eight teams participated, comprising of four to five students coming from 12 universities across the UAE.

Detailing about the app, Bilal Shabandri said, “We named our app Na'eem, which can be loosely translated as 'green initiative'. Our main objective is to encourage the people to use public transport by making it more fun.”

“With our app and using AR, commuters can point their smartphones at certain Metro or public bus stations and sensors will bring green scenery on their screens. The functionality will also allow app users to see the visuals which can be collected as green points and converted into credits to their NoL cards,” he added.

Shabdanri is a cloud developer  and electronics and communication engineering student at Amity University.

Tareeqi (My Way) app won the third prize of AED5,000 which is helpful for People of Determination for using public transport using sign language and voice recognition.